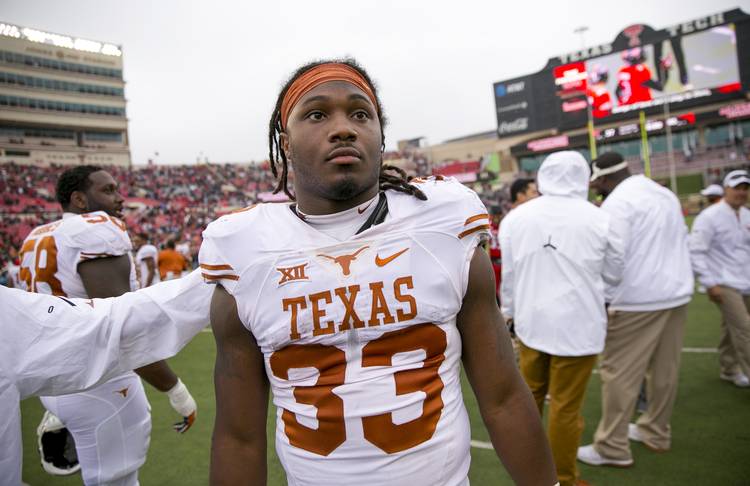 If you root for the Longhorns, you know what’s at stake on Saturday. Not just bowl-eligibility, but also Foreman’s pursuit of Campbell’s 39-year-old UT record for consecutive 100-yard games. Foreman tied Campbell’s 1977 mark last week with a 167-yard day against West Virginia, and a 12th straight triple-digit performance in Lawrence would leave Foreman — a Heisman hopeful and a Doak Walker Award semifinalist — alone in the history books. Kansas is an ideal candidate for Foreman to break the record against; the Jayhawks are allowing 225.7 rushing  yards per game. That ranks 110th in the country.

2. Will Texas go for it or take the three points?

Texas was 2 of 3 on its three fourth-down conversion tries in last week’s 24-20 loss to West Virginia, making the Longhorns 9 of 16 on fourth downs this season. After the close loss to the Mountaineers, though, the Longhorns had to answer questions about the two times they called for kicker Trent Domingue on fourth down instead of the offense. On fourth-and-1 at WVU’s 2 with nine seconds left in the first half, UT opted for a 19-yard field goal. And on its first possession of the second half, Domingue’s 37-yard effort was blocked, again on a fourth-and-2. If a fourth-and-short comes up in Lawrence, will Texas play it safe or take a risk?

3. Will Texas’ defensive momentum carry over on the road?

The 24 points that Texas allowed West Virginia tied for the third-best showing of the season, matching the 24 points given up at Kansas State and bettered only by the six points allowed to Iowa State and the seven to UTEP. And Texas did it last week mostly without missing linebacker Malik Jefferson. Even without him, Texas held the Mountaineers to 42 yards and two first downs over their final five possessions. Dylan Haines had two interceptions in that span. Kansas ranks last in the Big 12 in both scoring (20.0 points per game) and total offense (357.9 yards per game).

4. Will the 18 Wheeler make an appearance?

Tyrone Swoopes suited up for last week’s game against West Virginia, but his number was not called as Texas opted to use Foreman on the fourth-and-1 and fourth-and-2 tries it converted. Swoopes hadn’t failed to appear on a participation report since last year’s Cal game. But on Monday, Texas coach Charlie Strong reiterated that the Longhorns haven’t abandoned Swoopes’ 18-Wheeler package, which has sputtered at times but also has seen success in games against Notre Dame and Oklahoma State.

Q&A with a Kansas beat writer: History, injuries point to a Texas win