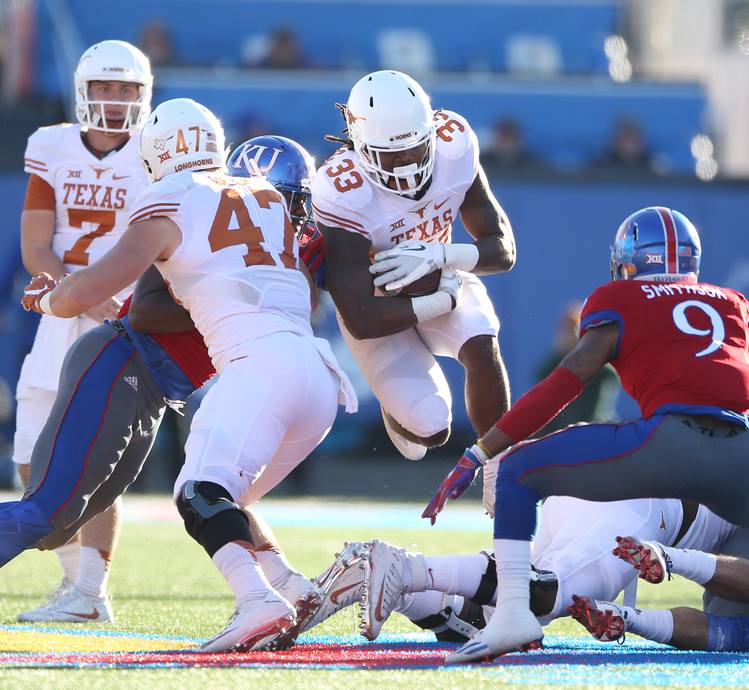 Texas's D'Onte Foreman during the first half in Lawrence, Kansas on Saturday, November 19, 2016. DEBORAH CANNON / AMERICAN-STATESMAN

It’s a done deal for D’Onta.

Texas junior D’Onta Foreman broke a tie with Earl Campbell in the Texas record books on Saturday. With a 19-yard run in the third quarter of a football game at Kansas, Foreman recorded his 12th straight 100-yard rushing performance. Campbell had 11 straight 100-yard efforts during a Heisman Trophy-winning season in 1977.

A contender for the Heisman Trophy as well as the Doak Walker Award and the Walter Camp Player of the Year honor, Foreman entered this weekend’s road trip with 1,613 yards and 13 touchdowns on 241 carries. Saturday’s milestone moment also meant that Foreman passed Jamaal Charles (1,619 yards) for fifth place on Texas’ single-season rushing chart. Fourth place and Campbell’s 1977 score of 1,744 yards are up next.

Staff takes: Not that we’re taking this one for granted, Texas, but …