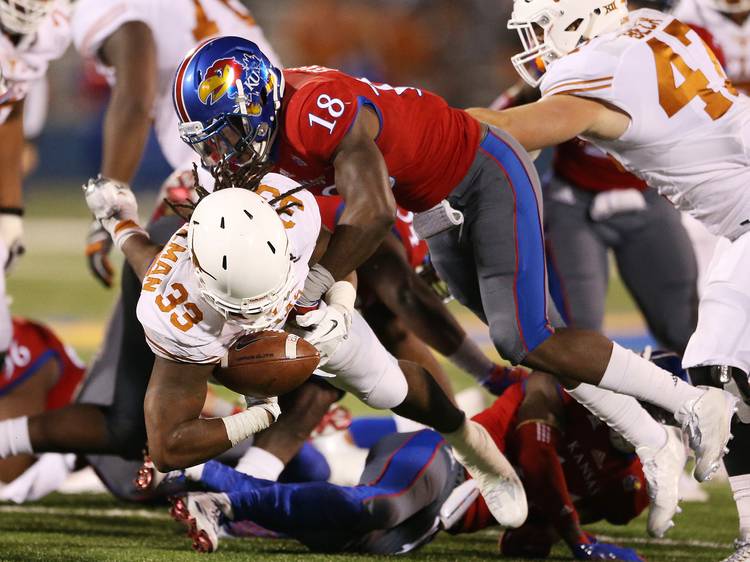 Four became memorable on Saturday. For all of the wrong reasons.

The Longhorns’ up-and-down season was further pushed into disarray with a 24-21 overtime loss to Kansas. Matthew Wyman’s 25-yard field goal sealed Texas’ fate, but it was four turnovers during a disastrous second quarter that put the Longhorns in a position to lose to the lowly Jayhawks (2-9, 1-7).

Texas had committed only 16 turnovers in its first 10 games, but Saturday’s second-quarter swoon had the Longhorns staring at an unexpected 10-7 deficit at halftime.

The Longhorns left Lawrence having committed six turnovers, the last of which sealed the loss when Shane Buechele was picked off in overtime.

“We didn’t take care of the ball today,” offensive coordinator Sterlin Gilbert said. “Our defense was playing great early on and all the way through the game. We should have been able to get away at times, and we just weren’t because of mistakes.”

Kansas started the second quarter with the ball, and Texas forced a punt. The Longhorns then went three-and-out and Buechele was injured after a hard tackle on his third-down run.

Unfortunately, that was the happiest ending to a drive Texas could muster in the quarter.

One week after he did not play against West Virginia, senior quarterback Tyrone Swoopes was called upon to replace Buechele. Over his first four snaps, Swoopes ran once — as he has been known to do — and threw a pass for the first time since Sept. 17, an incompletion. On third-and-8 at the Texas 39, however, Dorance Armstrong, Jr. hit Swoopes, and the lineman’s 10th sack of the season forced a fumble that was recovered for Kansas by Manor product Denzel Feaster.

Buechele, who was diagnosed with a strained neck, returned on the next series. Two of his next five throws, however, were picked off, and Brandon Stewart turned the second pick into a 55-yard touchdown return, tying the game 7-7.

“I think he was (OK),” Texas coach Charlie Strong said of Buechele. “He just didn’t make those throws there.”

Running back D’Onta Foreman entered the weekend on history’s doorstep — his 12th straight 100-yard game broke a school record he shared with Earl Campbell — but he lost a fumble near midfield in the second quarter. Foreman’s fifth fumble of the season led to a five-play drive and the Jayhawks’ lead-taking 36-yard field goal.

To add insult to injury, Buechele was nearly intercepted by Stewart again on a telegraphed pass to Jacorey Warrick on Texas’ final possession of the first half. Kansas muffed a Texas punt two plays later, but Kris Boyd was unable to control his momentum and corral the football in the Jayhawks’ red zone.

The total damage in the second quarter?

Twenty-two plays for 69 yards and those four turnovers. The Longhorns picked up four first downs and failed to advance into Kansas territory.

“Ball security is job security,” offensive lineman Connor Williams said. “Of course it sucks to get turnovers like that. It put us behind, but we can’t change it.”

Texas took control of the game in the second half, and held a 21-10 in the fourth quarter. Feaster, though, forced a Foreman fumble at the Kansas 18 amidst a Jayhawks rally, and Buechele’s third interception doomed the Longhorns in overtime.