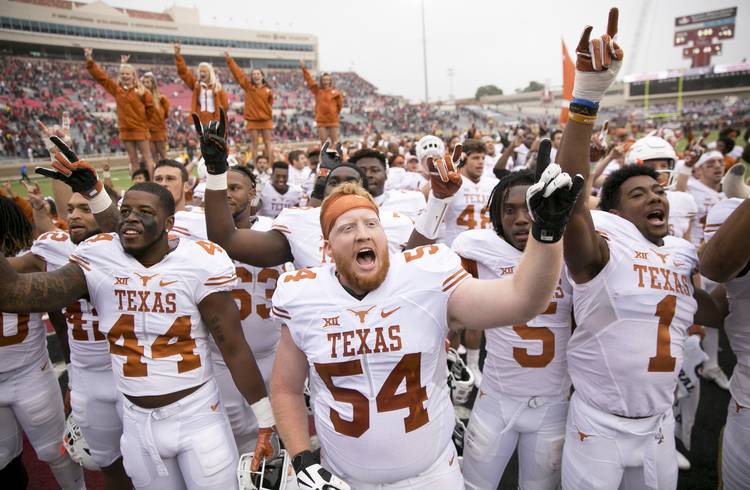 Brian Davis, Danny Davis and Cedric Golden will be covering the game in Lawrence.

The best thing that could happen for Charlie Strong on Saturday would be for a burnt-orange wrecking crew to show up in Lawrence. The Jayhawks are bad, and at this point it’s unclear if David Beaty is the right coach for one of the toughest turnaround jobs in major college football. Sorry, KU. Texas is not sorry. The Longhorns should unleash D’Onta Foreman. Have Shane Buechele rear back and go deep for Devin Duvernay and Collin Johnson. The defense needs a bunch of sacks. The Texas administration needs to see this program do what it’s expected to do against a weak team. A loss? Oh, dear. For Strong’s sake, I don’t even want to think about it.

Michael Dickson is among the nation’s best punters, but what else about Texas’ special teams units has been special? Texas is getting almost nothing from kickoff returns and the only time we’ve talked about a punt return is because a referee left his microphone on near Dana Holgorsen. The kicking game has missed five field goals and had four extra-point attempts blocked. Charlie Strong reiterated on Monday that Trent Domingue is still his kicker, but the graduate transfer, as well as other Longhorns on special teams, need to justify the faith their coach is showing in them. Kansas may be the perfect team to do that against.

Kirk Bohls: A whole lotta bad in this matchup

Talk about the real trickle-down theory. The season is trickling to an end, at least in these parts, with a terrible matchup against a terrible Kansas team that has garnered the attention of exactly no one. The weakest team in the weakest Power 5 conference should offer little resistance, yes, even to the Longhorns. Even the players came off very subdued emotionally as the season has worn on them. This game will be the ultimate barometer for Charlie Strong.

John Burt is a talented player, but he has an obvious case of the yips. It just seems like forever since the speedster has come down with a clean catch. The drops are starting to pile up. Burt’s a big-play type, but he’s gotten into his own head when it comes to catching the ball. Once thought to be Texas’ No. 1 receiver, he’s been passed up by players like Dorian Leonard, Collin Johnson and Jake Oliver. Kansas could be one heck of a slump buster because there’ll be ample opportunities to make plays downfield against one of college football’s worst defenses. Hopefully Sterlin Gilbert figures out a way to get Burt involved early; a nice little go-route for a long touchdown would do wonders for his psyche. Hopefully we’ll see Burt back in play-making mode in Lawrence.

The Eyes of Texas: Three Jayhawks the Horns will be watching