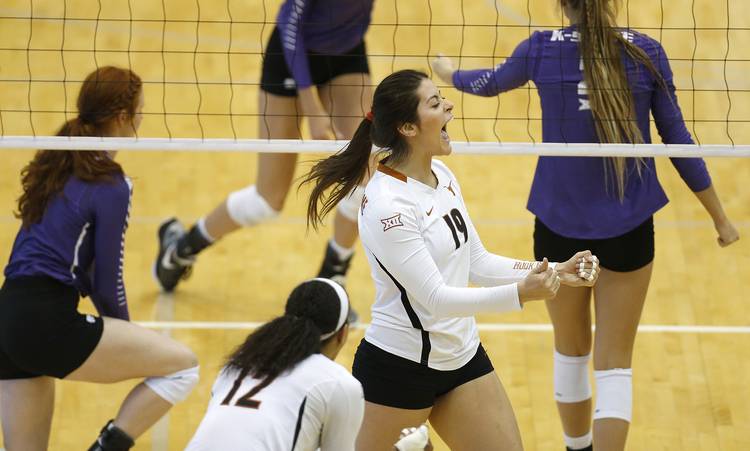 Texas (21-4, 13-2 Big 12) followed up its midweek sweep of Texas Tech with another strong performance at home, giving Jerritt Elliott his 400th coaching win since taking over the program in 2001.

“I wasn’t aware of it,” Elliott said. “It’s always nice. I hope I can get a couple hundred more here at Texas.”

The Wildcats haven’t beaten Texas since 2003.

Things improved slightly in the second set for the Wildcats, but then so did the Longhorns. Texas opened on a 15-8 run, capped by one of Ebony Nwanebu’s 10 kills on the night. White had kills on five of her six attempts and Texas hit .714, leading by as many as 10 at one point.

A competitive third set featured six ties before Kansas State fought off the sweep. The Wildcats took a 9-8 lead on a kill from Katie Brand, which would be the only lead change of the set. She finished with six kills and a team-high 36 assists.

“I think we’re playing some of our best volleyball right now,” Elliott said. “We just took a little break from the defensive side in game three and let them hit .586. That can’t happen.”

The Wildcats committed seven of their 22 attacking errors in the deciding set. Texas started the set on a 19-9 run that brought the crowd to its feet. Kansas State tried to rally, drawing within 24-17 before Kylee Zumach served into the net to end the match. The Longhorns held Kansas State to a .195 hitting percentage, after limiting Texas Tech to a .135 percentage earlier in the week.

Texas remains one game behind Kansas in the conference standings. The Longhorns will honor their seniors next Saturday at 1 p.m. as they close out the regular season at home against West Virginia.

“It’s not our last game in Gregory,” added senior Nicole Dalton, who finished with eight digs.

Texas will host the first two rounds of the NCAA Tournament on Dec. 2 and 3. Seedings will be announced Nov. 27.