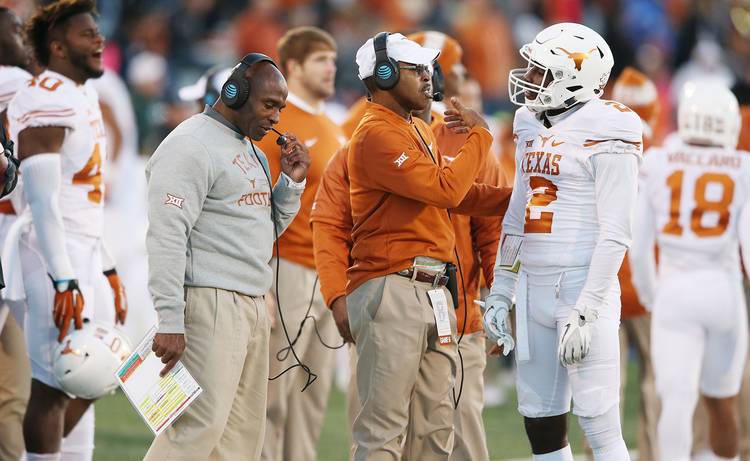 Texas's Charlie Strong on the sidelines during the second half in Lawrence, Kansas on Saturday, November 19, 2016. DEBORAH CANNON / AMERICAN-STATESMAN

Foreman, who rushed for 250 yards, not only broke Earl Campbell’s 39-year-old school record with his 12th straight 100-yard game, but he also bypassed Campbell and Cedric Benson for the No. 3 spot on UT’s single-season rushing list. Foreman, who’s been named a semifinalist for both the Doak Walker and Walter Camp awards and is generating some Heisman discussion, has come full circle: The first 100-yard game in his record string came last year against, you guessed it, Kansas. In his last four games, Foreman has produced 250-, 341-, 167- and 250-yard efforts.

2. DID TEXAS GO FOR IT OR TAKE THE THREE POINTS?

Texas went for it — and lost.

With the game on the line — Texas, up 21-18 and facing a fourth-and-5 at Kansas’ 32 with 1:03 left in the game — Charlie Strong and Sterlin Gilbert opted to go for it rather than try a 49-yard field goal by the hot-or-cold Trent Domingue, and Foreman was stopped short for a 3-yard gain. That allowed Kansas to drive for its game-tying field goal to force overtime. Texas went for it on fourth down three times on Saturday, converting two of them. That mirrors last week’s loss to West Virginia, when Texas was 2 of 3 on fourth downs but was criticized for trying field goals on two other fourth-and-short moments.

3. DID TEXAS’ DEFENSIVE MOMENTUM CARRY OVER ON THE ROAD?

This was, after all, Kansas — ranked dead last in the Big 12 in both scoring (20.0 points per game) and total offense (357.9 yards per game). The Longhorns forced two turnovers, had a pair of sacks and allowed KU’s offense only 17 points, but needed a dominant afternoon to help out the offense.

4. DID THE 18-WHEELER MAKE AN APPEARANCE?

Although Tyrone Swoopes did. Last week, in the loss to West Virginia, Swoopes failed to make it onto the field for the first time since last year’s Cal game. He entered the game in the second quarter when Shane Buechele was shaken up after a hard tackle. In Swoopes’ only drive of the game, he threw incomplete to Collin Johnson downfield and then lost a fumble as he maneuvered out of the pocket. The Longhorns didn’t use his 18-Wheeler package on short yardage for the second straight game.

Third and Longhorns: Inside Texas-Kansas