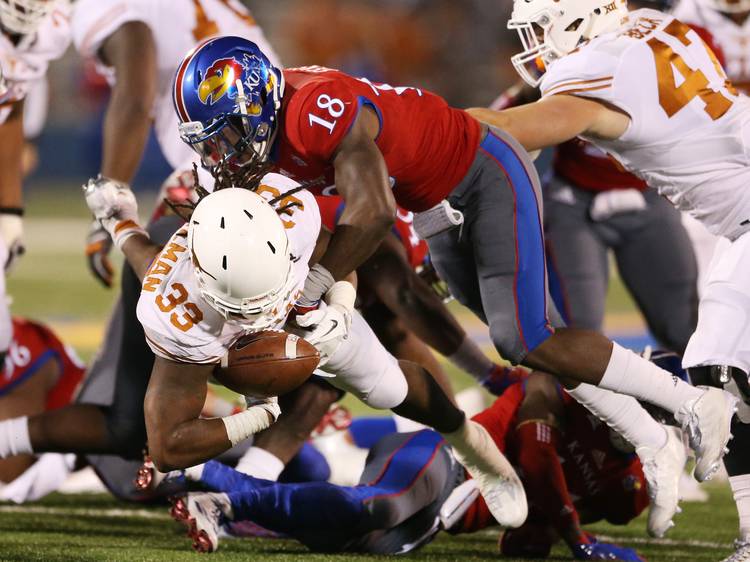 WHY TEXAS (5-6, 3-5) LOST: We’re not normally into pointing fingers, but this was a historic loss, so here goes. Texas lost for lots of reasons. The Longhorns didn’t look particularly interested to play at a reasonably high level, especially in the first half, when they were anything but. The six turnovers were inexcusable. Shane Buechele threw three picks, each one exponentially more costly. D’Onta Foreman rushed for 250 yards and a pair of touchdowns and that was great, but he also lost two fumbles. The defense was good in spots, but not nearly good enough to overcome what was happening on offense. Leading Kansas by 10 points in the second half should have been enough. If coffee is for closers, the Longhorns don’t deserve any. Remember how bad that night in Ames was last year? This was worse. Much, much worse.

WHY KANSAS (2-9, 1-7) WON: The Jayhawks, overmatched on paper and on the field in terms of talent, took advantage of a mercurial Longhorns team when it comes to playing on the road. The six turnovers were huge, especially Brandon Stewart’s first-half pick-six and Mike Lee’s huge interception on a Buechele overthrow in overtime. The Jayhawks got hot late in the game on offense, sparked by Carter Stanley, Steven Sims and Ke’aun Kinner, then rode the foot of Matthew Wyman when the game was on the line — twice. The Jayhawks had dropped 19 straight games against Big 12 opponents and 23 straight to FBS foes. So they were due. Fans carried the goal post off the field, for good reason.

THE EYES OF TEXAS: … were on three specific Jayhawks — Stanley, the redshirt freshman making only his second career start; wide receiver Steven Sims Jr., among the Big 12 leaders in catches, receiving yards and touchdown catches; and safety Fish Smithson, the only Jayhawk who was an all-conference selection in 2015 and this year’s team leader in tackles and interceptions.

Sims had seven catches for 79 yards and had an important 2-point conversion run.

Smithson had 12 tackles and an interception.

Offense: D’Onta Foreman. Despite those two fumbles. It was a history-making day for him.

Defense: Breckyn Hager. He led the team in tackles, had 2.5 tackles for loss and a sack.

(1) Michael Dickson had one busy, busy day. He punted eight times, averaged 43.8 yards per kick, had a long one of 51 yards and pinned KU back on its own 6 on another. Ice that guy’s foot, please.

(2) Give Edwin Freeman points for sticking with it. In the first half, he dropped an interception on a Naashon Hughes tipped pass that went high into the air. But then on KU’s first drive of the second half, he did pick off a pass on a nearly exact same play, a high tipped pass from John Bonney.

ON DECK: TCU (Nov. 25, 2:30 p.m./TV TBA). It comes down to this. Win, and make it to a bowl game. Lose, and miss out on the postseason for the second straight year and finish with a losing record for the third straight season. Are those stakes high enough? It puts new meaning to the term Black Friday. Depending on how things go in the regular-season finale, this could be a dark, dark day at DKR.