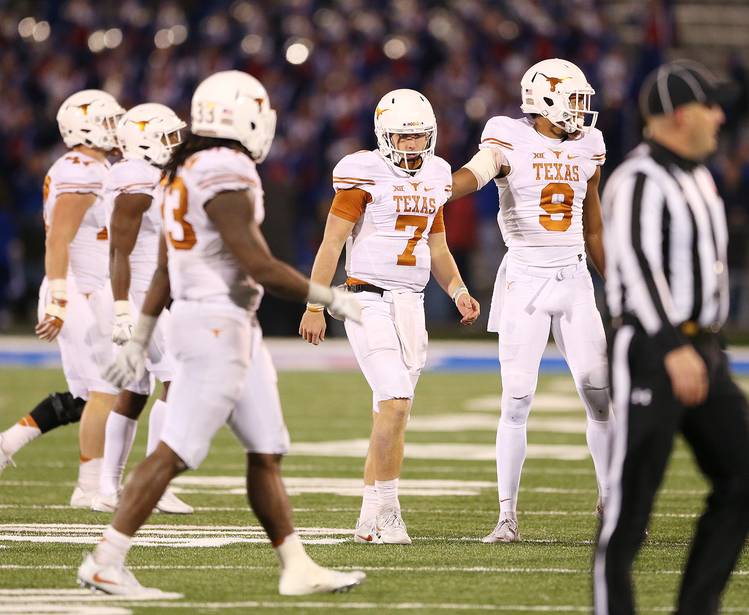 Texas's Shane Buechele, center, is comforted by #9 Collin Johnson as he leaves the field after throwing an interception to Kansas during overtime in Lawrence, Kansas on Saturday, November 19, 2016. Kansas beat Texas 24-21. DEBORAH CANNON / AMERICAN-STATESMAN

LAWRENCE, Kan. — There were 171 snaps taken in Texas’ 24-21 overtime loss at Kansas on Saturday. Here are five that ended up making a big difference:

Kansas won the coin toss and opted to open the second half with the football, so Texas began its second straight game on offense. (The Longhorns started on defense in the first nine games). After earning a field goal on last week’s first drive, Texas produced a 75-yard touchdown catch on its first play on Saturday. Shane Buechele threw a quick pass to Jacorey Warrick, who shook his defender and outran everyone to the end zone.

The Longhorns couldn’t maintain that quick-scoring pace on offense. Texas only scored two more times over its final 89 plays, and Warrick’s catch accounted for 45.5 percent of his team’s passing offense.

2. History in the making

Trailing 10-7 after a turnover-plagued second quarter, Texas began the second half much like the first. After Kansas was intercepted on the third quarter’s third snap, Texas put together an eight-play scoring drive that featured seven carries and a touchdown run from junior D’Onta Foreman.

The next time that he touched the ball, Foreman picked up 19 yards. That gave him 108 yards on the day, and his 12th straight 100-yard performance. Earl Campbell had established the school record of 11 consecutive 100-yard games in 1977.

Foreman also recorded a school-record 51 rushing attempts during a 250-yard day, and he passed Jamaal Charles, Campbell and Cedric Benson on Texas’ single-season rushing list. Currently in third place with 1,863 yards, Foreman is only looking up at the 1,893- and 2,124-yard campaigns accumulated by Ricky Williams.

Two drives after Foreman’s score and one possession after he made history, Texas appeared poised to distance itself from the Jayhawks. Texas faced a third-and-2 at the Jayhawks’ 9-yard line, but Buechele lost five yards. Up 14-10, Texas called on kicker Trent Domingue to pad its lead. Domingue then kicked his 31-yard attempt to the left of the upright.

A graduate transfer from LSU, Domingue has missed six of his 20 field goal attempts this season. Five days after he received a vote of confidence from head coach Charlie Strong, Domingue’s latest miss was costly in a game that was decided in overtime. He also was unable to convert a 35-yard attempt in the fourth quarter of a 24-21 loss to Kansas State, and a 37-yard try that was blocked during a 24-20 setback against West Virginia forced the Longhorns’ ill-fated search for a touchdown in the waning seconds.

Trailing 21-18 with a few seconds to go in regulation, Kansas went for the win from the Texas 19. Jayhawks quarterback Carter Stanley looked for Steven Sims Jr. in the end zone, but waiting for the pass was Texas defensive back Kris Boyd.

Boyd got his hands on the football and appeared to come down with the game-sealing interception. The ball became dislodged, though, as Boyd hit the ground, and officials ruled that he did not complete the catch. The play was not reviewed, and Kansas kicked an overtime-forcing field goal on the next play.

Had Boyd been credited with the interception, he would have saved his defense for the second time in three weeks. He picked off Patrick Mahomes II in the end zone at the end of Texas’ 45-37 win at Texas Tech on Nov. 5.

5. Oh no in overtime

Matthew Wyman ended the game — and perhaps Strong’s Texas tenure — by booting a 25-yard field goal in overtime. The win was Kansas’ first over the Longhorns since 1938. Texas dropped to 13-3 in a series that took a break from 1939-1995.

Texas had its chance in overtime, but the extra session’s second play saw Buechele sail a pass that was caught by Kansas safety Mike Lee. Buechele’s third interception closed out a forgettable performance for the true freshman, who had never been picked off more than once in a game. One week after he recorded the first 300-yard game of his career, Buechele was limited to a season-low 165 yards.