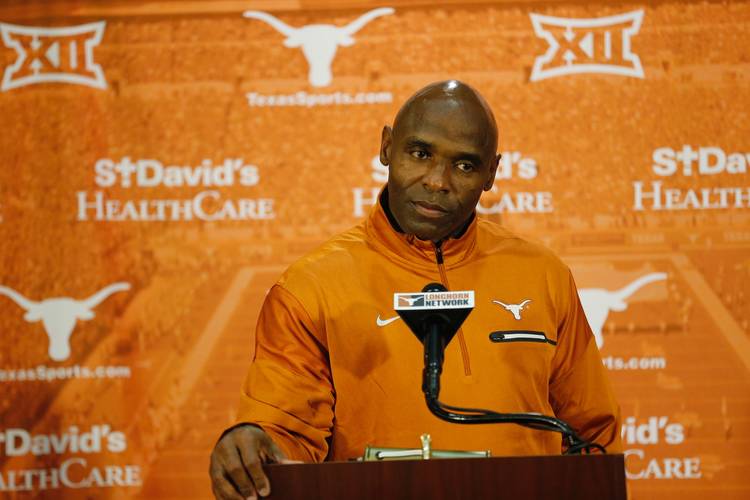 With more than 50 players watching inside the Centennial Room, Texas coach Charlie Strong met with reporters on Monday and explained his rationale why he should be allowed to return as UT's coach in 2017. (Ralph Barrera/American-Statesman staff)

Charlie Strong took a long swig of purple Gatorade on Monday, steadied himself at the podium and spent 30 minutes explaining in calm, confident tones why he should remain the head coach at Texas.

Standing in the eye of a hurricane, Strong admitted the “wins and losses, they don’t stack up.” With more than 50 of his players watching inside the Centennial Room, the third-year coach argued that his 16-20 overall record was merely one component of success. Strong insisted he’s focused on “building the total person.”

It may not matter. The American-Statesman reported on Sunday that Texas President Gregory L. Fenves has already made the decision to fire Strong. Multiple outlets confirmed the story, and no UT administrator refuted anyone’s reporting on Monday.

Fenves was not made available on Monday, and men’s athletic director Mike Perrin did not attend Strong’s news conference, as has been his custom late this season.

Fenves and Perrin initially planned on letting Strong finish the regular season and then make a final decision, a source familiar with their thinking told the Statesman. But last Saturday’s overtime loss to Kansas, one of the worst teams in college football, changed everything.

Now, an announcement about Strong is expected to come Saturday, the day after the regular-season finale against TCU.

Strong said Monday that he speaks with Fenves after every game. He also spoke with Perrin after the 24-21 disaster in Lawrence. “I’ve been told that we will be evaluated at the end of the season; after the last game against TCU, a decision will be made,” Strong said.

Asked if he believes if a final decision has been made, Strong said, “I don’t believe it has been done.”

UT players confirmed Monday that some had considered boycotting the TCU game if Strong was removed. “That won’t happen. They won’t boycott this game,” Strong said. Several seniors acknowledged the talk was real, but said nothing would happen.

“The program is going and heading in the right direction,” Strong said. “Now, if I was to stand up here and say, ‘You know what? I’ve got issues all over the place plus the wins and losses. Then, I’ve got guys who are doing all these different things.’ Yeah, it would be an issue.

“But it’s not an issue, because of the respect we have for our players and they respect they have for this coaching staff,” he added. “It’s probably why they showed up in the numbers they showed up today.”

Strong pointed out that a majority of the two-deep roster returns next season. Running back D’Onta Foreman (Doak Walker), offensive tackle Connor Williams (Outland) and punter Michael Dickson (Ray Guy) are national award contenders. The defense has clearly made strides since Strong took over play-calling duties prior to the Oklahoma game.

“I told these guys yesterday, ‘This group of guys is going to win the national championship,’” Strong said. “I said that to them. I feel that strong about that statement.”

For Strong, his wins and losses are out of whack when viewed by historical norms. He holds the lowest winning percentage of any coach in UT history. The Longhorns are in danger of posting their third consecutive losing season for the first time since 1936-38.

It’s a bottom-line business, and coaches are paid to win games. Former coach Mack Brown was fired after the 2013 season for winning only eight games despite coming close to winning that year’s Big 12 title. Strong has two years remaining on a guaranteed contract worth $10.7 million.

“I’m not going to say it’s not important,” senior receiver Jacorey Warrick said about Strong’s record. “But at the same time, sometimes it takes more time than you expect. Like, it’s not going to happen right away. I guess what I’d say to (the fans) is why don’t you come coach?”

Some former Longhorns have a hard time squaring the players’ passion for Strong with the team’s 5-6 record this season.

“At some point the players gotta be responsible, man,” former Texas cornerback Quandre Diggs tweeted. “Strong didn’t turn the ball over 6 times.. he didn’t get the field goal blocked.. at some point the finger pointing has to go to players!”

In a passionate plea on Fox 7, Emmanuel Acho said, “Sooner or later, you have to play for the man.”

“Talk is cheap in the real world, and talk is especially cheap in the football field at a high level,” Acho said. “If you love coach Strong, you have to play for him.”