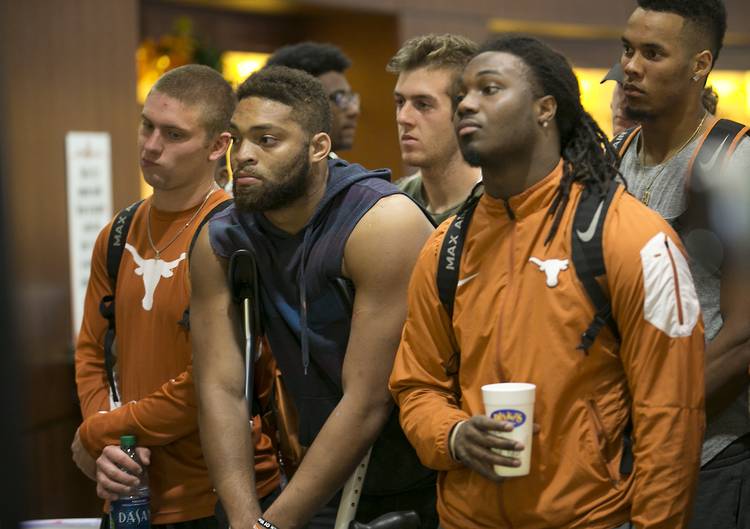 Several University of Texas football players came to support and watch their coach Charlie Strong address his coaching status during his weekly media availability in Belmont Hall on campus Monday afternoon November 21, 2016. Strong says his job status will be evaluated after their last regular season game at home his Friday against TCU. RALPH BARRERA/AMERICAN-STATESMAN

Paul Boyette Jr. sat in a chair for 13 minutes on Monday, fighting back tears.

The 317-pound defensive tackle’s hands wistfully wandered as he defended Texas coach Charlie Strong to media members. His leg shook, and he consistently fiddled with his wedding ring. He struggled to find words, and at one point he nervously apologized after he inadvertently cursed while answering a question.

It was a sight that even his wife, former Texas basketball star Imani Boyette, expressed surprise in seeing.

I've been with this man 5 years and only seen him cry 3x 😢 https://t.co/OuNextQwh7

“I can put on a tough guy act playing football,” Boyette said. “Nine times out of 10, you would have never thought we’d be in the predicament we are. Whoever comes in is going to reap the blessing of the foundation that he lays. … I think he still deserves to be here. It’s that simple.”

Boyette was hardly alone. One day after the American-Statesman reported that a decision has been made to fire Strong, the embattled coach held his weekly availability with the media. Joining him were more than 50 of his players, who formed a wall behind reporters as they watched his press conference.

As news broke this weekend, so did a plan to support Strong. Nobody took credit for the string of text messages among the players, but the information about the press conference was delivered.

So running back D’Onta Foreman showed up at the Bellmont Hall’s Centennial Room on Monday morning. Quarterback Shane Buechele blended in among role players and unrecognizable faces in the crowd. Linebacker Malik Jefferson, who missed the Kansas game with a concussion, was there, and tight end Caleb Bluiett appeared on crutches.

Strong left the podium to a round of applause from his players.

“He doesn’t have the support, I guess, of some of the people who have been trying to get him out,” receiver Jacorey Warrick said. “The people who really matter — the players and stuff like that — you can see where our support lies.”

Strong is 16-20 over his three seasons at Texas. Six of those losses have come this year, after Texas rocketed up to No. 11 nationally in the Associated Press Top 25 poll after the season-opening upset of Notre Dame, including Saturday’s humiliating overtime loss at Kansas.

His players, though, were willing to fall on the grenade Monday.

“It’s the players who put the pads on that go out and play and go out and score,” sophomore left tackle Connor Williams said. “I think there’s enough blame to go around. The season just hasn’t gone how we wanted it to.”

Players admitted that the uncertainty around Strong’s future has been a distraction, but they also know that TCU (5-5, 3-4 Big 12) awaits on Friday. Even if Texas beats TCU and wins a bowl game, Strong would enter the offseason with the worst winning percentage in school history.

“You asked this guy to come in and change the culture, and he’s done that,” Cole said. “It’s a process. You’re not going to get complete change in three years; you’ve got to give it time. My thing is to continue to build with us, build with coach Strong. I’m telling you he’s going to pay dividends for his program, for this fan base. He’s going to build a dynasty here.”

Signs of support for Strong aren’t rare among the Longhorns. After all, this is the coach that was tossed around by players after upset wins over Oklahoma last year and Notre Dame this year.

Boyette said he hopes that Strong is retained, but conceded it was not his decision. In addition to arguing that Strong needed more time, Boyette preached about the life lessons taught by his coach and the impact Strong had made in the locker room.

“I don’t think you’re going to ever find a head coach that loves his players like he does and genuinely cares,” Boyette said. “He gets blasted for not doing his job or not doing his job to the best ability. The things that people see on Saturday, life is way more than that.”