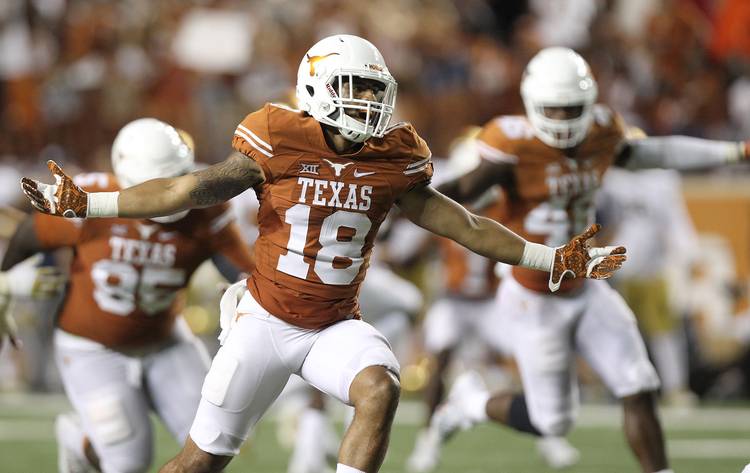 Belton football coach Bob Shipley has a saying that he’d rather tell a player “Whoa” than “Giddy-up.”

Kevin Vaccaro was a “whoa” kid when Shipley coached him at Brownwood. In other words, coaches had to tell Vaccaro to slow down as opposed to get going. Shipley said Vaccaro treated every pass and every tackle, whether it was in a practice or in a game, like a game-winning play. Kids on Brownwood’s junior varsity team would cry and complain when Vaccaro refused to differentiate what was and wasn’t a full-contract drill.

“He’s pretty rare,” Shipley said. “Kevin never thought he was a great player and he had to prove it every snap. When you have a guy with some athletic ability and the intensity and chip on his shoulder, don’t ever bet against a guy like that.”

Vaccaro, a senior safety for Texas, has recorded 16 tackles in a reserve role this season, including two for losses. He’s the younger brother of former Longhorns standout and New Orleans Saints safety Kenny Vaccaro, but it was his worth ethic that drew Shipley’s praise this week.

For that, you can thank Vaccaro’s mother.

Alesia Vaccaro raised her two sons and her two daughters — one of whom is a junior at Texas, the other a junior at Miami — to be independent. (Vaccaro’s father died of a lung disease when Kevin was in the seventh grade.) Grades were scrutinized, and Alesia would have her children fill out paperwork — even at the doctor’s office — before she signed on the dotted line.

She also made her children run.

Starting from when they were kindergarteners, the Vaccaro kids ran every day. Sometimes they’d run at the park before school, or with a track program that was founded by Alesia herself. Sometimes it was a run that would start wherever she dropped them off at; Vaccaro recalled his mom occasionally following them in her car to make sure they didn’t cut across a course. During basketball and soccer season, they would do laps while dribbling.

“Most of the time I hated it, but it paid off,” Vaccaro said. “My mom saw the potential in us, and knew we’d be something special.”

Alesia was never sure how big her children would end up being, but she figured quickness would give them an edge in high school. The tactics admittedly may have looked “crazy” to outsiders, but she said she felt God had called her to raise her children that way.

“It taught them basically how to fight for things,” Alesia said.  “Even if you’re in pain, you’ve still got to do it. That’s what they’ve always known.”

Those childhood runs led Vaccaro to Texas, where he’ll play his final home game on Friday. An education major who has also studied business, Vaccaro will become his family’s first college graduate in December. The 5-8, 188-pound defensive back isn’t sure if he’ll get to work after graduation or train for Texas’ pro day. For now, he’s focused on getting to a bowl game.

Friday’s game will be the 43rd career game at Texas for Vaccaro, whose first start didn’t come until UTEP on Sept. 10. His three Brownwood teams went a combined 33-9, but he hasn’t found that same success at Texas, a college program that’s just as storied; Texas has won four national championships while Brownwood boasts seven state titles.

Texas went 9-4 in 2012, Vaccaro’s freshman year. But he redshirted in 2013 and Texas has gone 16-20 in the three years under Charlie Strong. Texas missed a bowl game in 2015, which meant that many of the players signed alongside him in 2012 ended their careers on a sour note. And now, with Strong’s status also up in the air, Texas (5-6) needs to beat TCU on Friday to secure a bowl invitation.

Vaccaro is one of about a dozen seniors who’ll be recognized in a ceremony before the game.

“It’s extremely important,” Vaccaro said. “Last year, everyone that was in my class didn’t get to go to a bowl game and just went on with their life. I don’t want to be sitting at home with no more games to play. It’s important to leave on a good note.”

Bigger games await, but the Texas women get back on winning track, 86-39