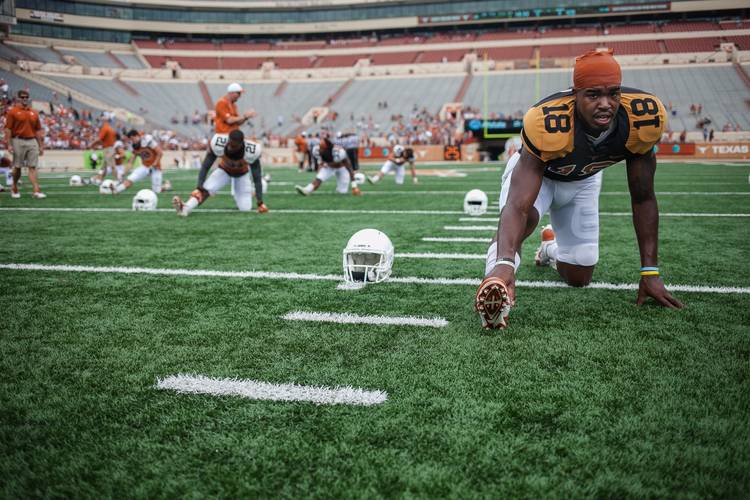 UT quarterback Tyrone Swoopes (18) warms up before the start of the Orange-White Scrimmage at Royal-Memorial Stadium in Austin on April 18, 2015.Lukas Keapproth/AMERICAN-STATESMAN

His quiet, almost shy demeanor has never wavered. He’s never cried foul, never lashed out at fans or reporters or critics or anyone, really, who ever believed he was in over his head.

You better believe there were times when Tyrone Swoopes wanted to.

The Texas quarterback burned his redshirt in the middle of the 2013 season when he was asked. In 2014, he stepped into the starting lineup after David Ash suffered a career-ending concussion, just like he was asked.

Coaches asked him to step aside the following year when Jerrod Heard, a redshirt freshman, won the starting job. And when he presented with a new role as a short-yardage runner, Swoopes performed as required, with seemingly little regard for what was best for his personal statistics or career.

If Swoopes’ character and class is not worth senior-day applause on Friday against TCU, then fans will have missed what it truly means to be a Texas Longhorn.

“I feel like in the end, I should be remembered for just being the person that I was while I was here,” said Swoopes, now a 22-year-old just weeks away from graduating. “I didn’t really play probably to the best of my abilities sometimes, but you never can say I gave up. I always played my hardest when I got the opportunity to play.”

The 18-Wheeler pulls into Royal-Memorial Stadium one last time against the Horned Frogs. What a journey it’s been.

“He was willing to do whatever it took to help us win,” offensive coordinator Sterlin Gilbert said. “The word ‘unselfish’ is the first word that comes to my mind.”

During his four-year career, Swoopes has 3,038 passing yards and 951 rushing yards. If he can somehow get those final 49 rushing yards, he would join Vince Young and Colt McCoy as the only three quarterbacks in school history with 3,000 passing and 1,000 rushing yards.

“I would say since I’ve been here, I definitely appreciate everything he’s done for us,” junior running back D’Onta Foreman said. “He’s a great leader, a great guy. He does everything anyone would ask him to do.”

Former coach Mack Brown believed he had signed the next VY when he inked Swoopes from Class 2A Whitewright. In some respects, Swoopes was straight out of central casting. The 6-4 signal-caller strengthened into a 250-pounder. Fans itched to see him as a freshman, and Brown finally gave the go-ahead during a late-night win at TCU on Oct. 26, 2013, a game delayed by lightning and pounding rain.

He doesn’t remember many friends there to see it. “Family? I think they left after the delay,” Swoopes said with a laugh.

He didn’t play extensively until his sophomore season. Ash suffered multiple hits in the 2014 season opener against North Texas, coach Charlie Strong’s first at UT. Afterward, Ash reported to trainers that he felt nauseous. He would never play again.

A new coach suddenly had a new quarterback.

“I’m very confident in Tyrone; I am,” Strong said before the next game, against BYU. “If I don’t believe in them, then no one else will believe in them.”

As the full-time starter, Swoopes had wonderful moments. He threw a perfect floater for a 2-yard score against UCLA. Against Iowa State, he made dynamite back-to-back throws — a 39-yarder to Jaxon Shipley and a 29-yarder to John Harris — to set up a game-winning field goal. Swoopes’ 45-yard pass to Armanti Foreman, which sealed a win over Oklahoma State, was impressive, too.

But there have been cringe-worthy moments, too. He fumbled on the 1-yard line against Baylor in what could have been an inspirational 99-yard touchdown drive in 2014. And he threw for just 57 yards against Arkansas in the Texas Bowl, a loss that sealed UT’s 6-7 record in Strong’s first season. Swoopes’ record as a starter is 6-8.

“Just had to grow up fast,” Swoopes said. “Stepping into a role like that, you just gotta go. From the help of coach (Shawn) Watson and all those coaches, they helped me move along as best I could. I think given the circumstances, I feel I did an all right job.”

Watson wanted Swoopes to succeed so badly, he nearly broke down in tears when asked about his project. “Honestly, no disrespect to anybody. I want to do it for him,” Watson said.

Swoopes started the 2015 season opener against Notre Dame, but it was a mess for all involved. He threw for only 93 yards as the Longhorns got blasted, 38-3. The next week, Strong changed offensive play-callers and inserted Heard, who started most of the season.

Receivers coach Jay Norvell, who had been at Oklahoma, found a new role for Swoopes as a junior. They called upon Swoopes to run a similar short-yardage package to what OU ran with quarterback Blake Bell. At Oklahoma, they called it the Bell-dozer. At Texas,  it became known as the 18-Wheeler, based on Swoopes’ No. 18 jersey number.

Swoopes wound up leading the Longhorns with 12 rushing touchdowns in 2015 and averaged 6.1 yards per carry. He also stepped back into the starting lineup in the regular-season finale at No. 12 Baylor and led Texas to a 23-17 upset win.

The 18-Wheeler was on display again in this year’s opener against the Irish. Freshman quarterback Shane Buechele played most of the game, but there was Swoopes at the end, diving into the end zone from 6 yards out in double-overtime to clinch a heart-stopping 50-47 win.

“That was something that I wasn’t expecting when I signed to play here, but I definitely enjoyed it a lot,” Swoopes said of his 18-Wheeler package. “The energy it brought to the team and the fans when we were successful, it’s something I definitely appreciate.”

Swoopes plans on spending his spring in the Dallas area training for a possible shot at the NFL. He might make a solid tight end. NFL scouts will always examine players of his size.

No matter what happens, Swoopes will leave Texas feeling good about his time here and his contributions.

“I had a great time,” he said. “People probably wouldn’t say that because we didn’t win as much as people thought we should. But with all the people that I’ve met, all the memories I made with those people, I’ve had a great time here.”

Betting the Horns: Texas-TCU is a game to watch, but not to gamble on

Their last chance: Can a big win over TCU save Texas and Charlie Strong?