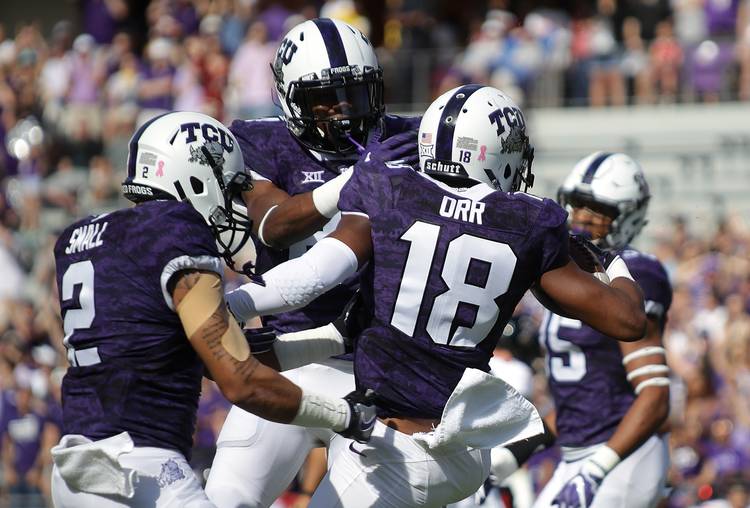 FORT WORTH, TX - OCTOBER 29: Nick Orr #18 of the TCU Horned Frogs celebrates a pass interception against the Texas Tech Red Raiders in the first half at Amon G. Carter Stadium on October 29, 2016 in Fort Worth, Texas. (Photo by Ronald Martinez/Getty Images)

For all the distress over the Texas Longhorns, check out the 2016 TCU Horned Frogs.

Picked by the league’s coaches to finish second in the Big 12, the frustrating Frogs are flailing away at 5-5, just hoping — like the 5-6 Horns — to squeeze into a minor bowl game.

The offensive line never jelled, nobody stepped up to replace Josh Doctson, the running game lacks depth and, most of all, Kenny Hill doesn’t stack up with other top Big 12 quarterbacks.

Hill, the Texas A&M transfer, is throwing for 286 yards per game, which seems impressive, but not when you consider his shabby 15-to-12 touchdown-to-interception ratio and mediocre 61.9 completion percentage.

From a gambling standpoint, the Horned Frogs are the biggest money-burner in the Big 12 and one of the 10 worst in the nation with a dreadful 2-8 record against the point spread. The Longhorns are 6-5.

Against seven common opponents, each team is 3-4, with the Horned Frogs a net +4 points in scoring differential and the Longhorns a net 0. Yes, they are that close.

TCU’s biggest advantage Friday is coaching. Gary Patterson is rock solid. Charlie Strong is shaky as all get-go. Patterson is worth a 3-point advantage (at least) over Strong. But the game is in Austin, which is why oddsmakers opened it at even.

Ah, now comes the Texas advantage: Intangibles. The players are trying to save Strong’s job, or at least give him a nice sendoff after three discouraging seasons. That’s a powerful emotion. The Frogs may just be going through the motions. Plus, they have two more chances to get bowl eligible. It’s last call for the Horns.

As a result, about 80 percent of the money has poured in on Texas, making the Horns a 3- to 3½-point favorite. Expect that line to reach 4 by kickoff.

The pick: Texas 30, TCU 27. Watch this game, but do not bet it. Both teams are disappointing and cannot be trusted. The Horns’ psychological advantage should be the difference, but it would be no surprise if they win straight up but fail to cover the rising spread.

Around the nation: Michigan (+6½) over Ohio State: Even if the No. 3 Wolverines don’t win outright, they are likely to scare the daylights out of the No. 2 Buckeyes in college football’s game of the year. … Kentucky (+26) over Louisville: Give me a four-touchdown SEC underdog any day. … Cal (+3½) over UCLA: Davis Webb gets the Bears to a bowl game. …Oregon (-3) over Oregon State: Downtrodden Ducks can still score enough to win the Civil War. … Navy (-7) over SMU: Too much distracting talk about Lake Travis ex Chad Morris leaving the Mustangs to coach Baylor. … Memphis (+4½) over Houston: With all the Tom Herman noise, the Coogs better be on upset alert.

Bigger games await, but the Texas women get back on winning track, 86-39