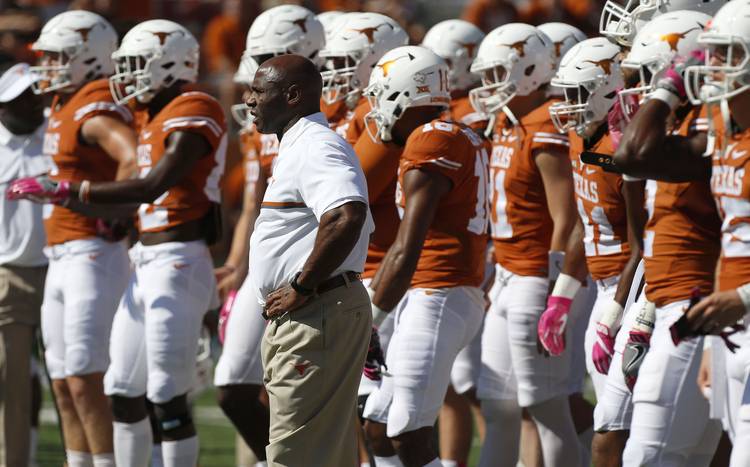 Texas head coach Charlie Strong with the team before a game against Baylor at Royal-Memorial Stadium, Saturday, Oct. 29, 2016. (Stephen Spillman / for American-Statesman)

The odds are slim, but it’s conceivable that Texas coach Charlie Strong could save his job with a blowout win over TCU in Friday’s regular-season finale, a university source told the American-Statesman.

What exactly constitutes a big win is subjective. A field goal at the final gun? Thirty points? Forty? Fifty? Does Strong need to be carried off the field in heroic fashion?

The Longhorns, slight favorites because of their 4-1 home record, probably need to win big for Texas President Gregory L. Fenves to think about reversing himself. The Statesman reported on Sunday that UT administrators have already decided to change coaches after this season.

On Monday, Strong said he believed no decision would be made until after TCU.

The Longhorns (5-6, 3-5 Big 12) head into the their regular-season finale needing one more win to become bowl eligible. The Horned Frogs (5-5, 3-4) are in a similar position with two games left.

“I told them a few weeks ago, probably a month or two ago, don’t quit on me and I won’t quit on you,” Strong said. “And that’s what we have always said to one another.”

Strong’s world was turned upside down the instant Kansas kicker Matthew Wyman drilled a game-winning, 25-yard field goal in overtime last week in Lawrence. Up until that moment, things were trending in a positive direction for the third-year coach.

But losing to the Jayhawks, one of the worst teams in college football, has changed the entire narrative.

Strong is 16-20 during his UT tenure. He holds the lowest winning percentage of any coach in school history. He’s got one last gasp against TCU coach Gary Patterson, author of two of the biggest UT losses on Strong’s watch. The Frogs crushed the Horns by 38 points in 2014 and by 43 points last season.

Strong heads into this do-or-die affair at less than full strength. His offensive line is beat up, and it’s unclear whether running back D’Onta Foreman can be effective after a school-record 51 carries against Kansas. Quarterback Shane Buechele also didn’t look right after getting brought down on his head in the first half last week. He threw three interceptions, including a critical one in overtime, as Texas turned it over six times.

TCU is 3-1 on the road this season, and like Texas, it’s a young squad. The Frogs have only eight scholarship seniors on their roster. Texas and TCU are the two best sack masters in the Big 12. They’re both averaging about 3.5 sacks per game.

The Longhorns have spent all week hearing plenty of noise about their coach — not to mention possible successors. “It’s definitely hard,” linebacker Tim Cole said. “You can act like we don’t see what people are saying about him. But we definitely are looking into that. It’s kind of hard not to.”

Will the Longhorns do anything about it?

Said senior receiver Jacorey Warrick, “TCU comes in here, and at 2:30 we’ll kick it off and we’ll leave it all on the line.”