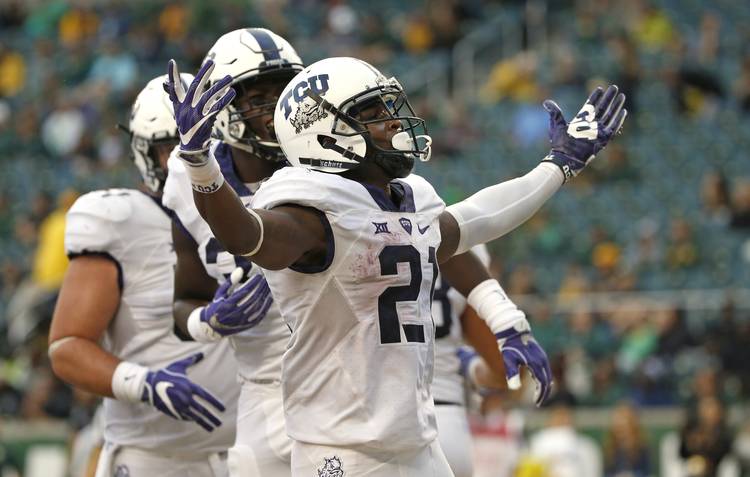 WACO, TX - NOVEMBER 5: Kyle Hicks #21 of the TCU Horned Frogs celebrates after scoring his fifth touchdown against the Baylor Bears during the second half at McLane Stadium on November 5, 2016 in Waco, Texas. TCU won 62-22. (Photo by Ron Jenkins/Getty Images)

Each week of the season, the American-Statesman has interviewed the beat writer of Texas’ opponent. This week, the Fort Worth Star-Telegram’s Carlos Mendez offers insight on TCU. You can find Carlos on Twitter at @calexmendez.

How different is this TCU team from the one that beat Texas by 43 points in 2015?

It doesn’t have the firepower it did with Trevone Boykin and Josh Doctson. Those players could lift a team past any mistakes. This team has far less room for error.

How would you grade Kenny Hill’s performance in his first year as TCU’s quarterback?

He gets a straight C. There are stretches where he’s very good, and he’s an excellent runner. But the turnovers are too much — they especially hurt against Arkansas, Oklahoma and Texas Tech.

Besides getting after the quarterback, what does this TCU defense do well?

It’s been a good tackling squad, except last week when Gary Patterson said they missed like 20 tackles in the fourth quarter against Oklahoma State. And the corners are good players. They’re both healthy, which is a big deal.

What’s the best win and worst loss on TCU’s schedule?

Name one TCU player that Texas fans aren’t talking about — but should be.