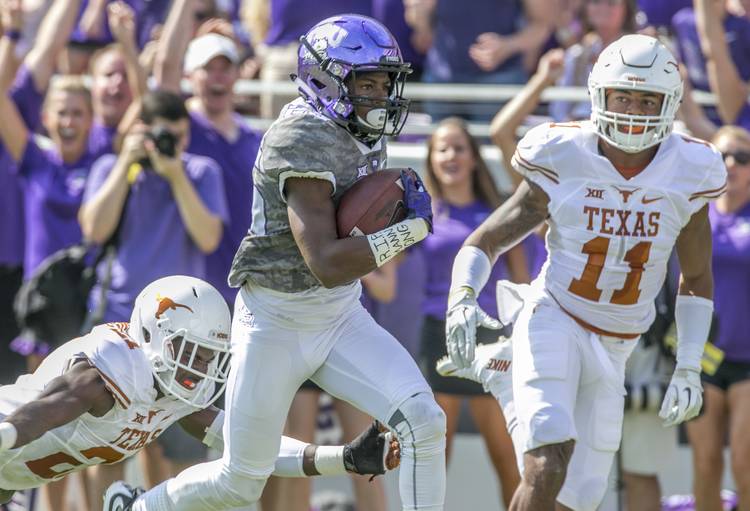 Here are five key matchups to watch on Friday:

Texas’ Doak Walker Award finalist had little tread left on his tires at the end of last week’s overtime loss to Kansas. A school-record 51 carries tends to leave you a little thin. “That was my role that night,” Foreman said this week. “I didn’t feel like I had 50 carries during the game.” Foreman now has 1,863 yards. He’s 137 yards away from only the second 2,000-yard season in school history. He’s averaging 186.3 yards per game and has had a school-record 12 straight 100-yard games. He’s fallen short of 137 yards three times this season — Notre Dame (131), Iowa State (136) and Kansas State (124). Few teams have stopped him. It’s doubtful TCU will stop him entirely.

Hill hasn’t been perfect this season, his first as TCU’s starting quarterback after having transferred from Texas A&M. He has 15 touchdowns and 12 interceptions. He threw for 449 yards and five touchdowns against Oklahoma, but then threw three interceptions at Kansas and he’s struggled in three of the last four games. The Longhorns have done a much better job at not giving up home run balls over the last month. If Kris Boyd, John Bonney, P.J. Locke III and others can hang with their receivers, that helps the defensive front try to collapse the pocket. Hill is no Trevone Boykin, but underestimate him at your own peril.

Not many fans outside of Fort Worth knew about KaVontae Turpin last year. But the freshman made himself known all over the league by smashing Texas, when he caught four touchdowns from 13, 49, 50 and 12 yards in the Horned Frogs’ 50-7 demolition. He’s missed four games this season with a left knee injury, but has returned. Turpin doesn’t qualify for NCAA statistics because he missed those games. He’s still averaging 17.8 yards on punt returns and 28.8 yards on kick returns. He’s on pace to break LaDainian Tomlinson’s all-purpose yardage totals.

Patterson’s run of defensive success has been amazing. In 16 seasons, TCU is 101-3 when it allows 17 points or less. The Frogs have held the Longhorns to 13 points or less in three of their four meetings as Big 12 teams. Patterson, the head coach but a well-established defensive wiz, may relish the chance to face a new foe in Gilbert, Texas’ first-year offensive coordinator who has more than proven himself as a solid mind at this level. Texas ranks 17th nationally in yardage (498.9) and averages 34 points per game. There’s just as much pressure riding on Gilbert in this one as there is Strong. For Patterson, this is old hat.

Several former Longhorns were quite vocal this week in their belief that the current players seemed more passionate about Strong than they were about losing to Kansas. There’s no question the current Horns love their coach. More than 50 players showed up for Monday’s press conference. But if that’s true, why are they turning the ball over, missing tackles and not doing enough things that lead to victories? It’s now or never for this year’s group. Strong could still save his job with a victory, but it must be big and decisive. His Horns must step up for him.

Q&A with a TCU beat writer: No Boykin, no Doctson leaves less room for error

The Eyes of Texas: Three Horned Frogs the Horns will be watching