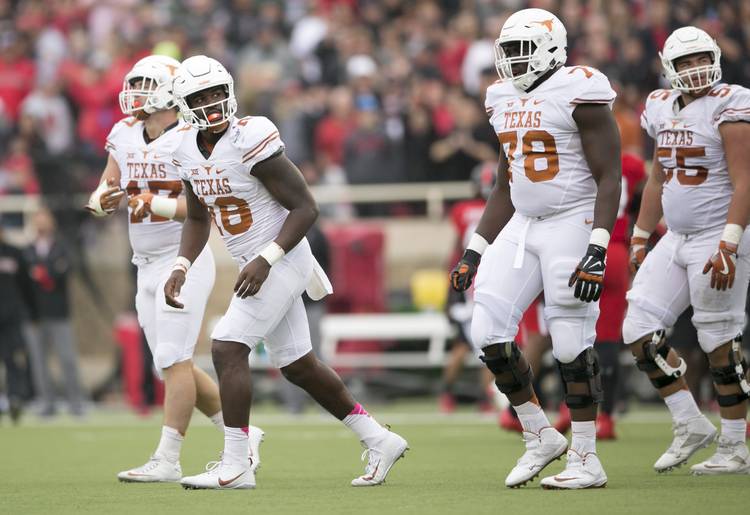 UT quarterback Tyrone Swoopes trots off the field after getting stopped by Texas Tech in the fourth quarter at AT&T Jones Stadium in Lubbock Saturday November 5, 2016. JAY JANNER / AMERICAN-STATESMAN

1. Whose senior star will shine the brightest?

Eighteen Texas seniors are trying to extend their careers by one more game on Friday. Win or lose, though, this is the final game at Royal-Memorial Stadium for them. Which senior will have the fondest farewell? The stadium’s loudest cheers so far this season were drawn by Tyrone Swoopes’ game-winning touchdown run in overtime against Notre Dame, but don’t overlook wide receiver Jacorey Warrick (43 career catches), offensive lineman Kent Perkins (33 career starts) or safety Dylan Haines (13 career interceptions, tied for fifth-most in UT history). And there was Trent Domingue’s game-winning field goal against Baylor. Maybe a senior or two will have another magic moment at home.

2. Will D’Onta Foreman take a breather?

Foreman had a school-record 51 carries in last week’s game at Kansas, and of the team’s other 12 runs, 10 were by quarterbacks. In fact, over the last four games, Foreman has 151 carries. Freshman Kyle Porter is listed as Foreman’s backup on the depth chart, but he has only 41 carries all season. That’s about 8 percent of the team’s 551 runs, of which Foreman has 292. Swoopes’ 18-Wheeler package has been abandoned the past two weeks.

3. Will Texas get after TCU’s Kenny Hill?

Texas has done just fine in the sack department; only Florida State (41), Alabama (40), Clemson (39) and Louisiana Tech (39) have more quarterback sacks than Texas’ 38. But in Texas’ last two losses, the Longhorns have been out-sacked by West Virginia and Kansas. TCU ranks third nationally in sacks per game (3.6), so expect the Horned Frogs to get theirs against Texas quarterback Shane Buechele and an offensive line that has started nine different combinations this year. The big question will be whether Texas can match TCU in sacks; TCU is allowing two sacks per game.

4. How many fans will actually show up on Friday?

It’s Black Friday. Will Texas fans opt for turkey leftovers and a football game between 5-6 and 5-5 teams or shopping for big sales? Loyalists have plenty of reasons to show up at Royal-Memorial Stadium — the possibility of a bowl berth, the seniors’ final home game and Charlie Strong’s job status — but both programs are floundering. Texas opened the season with a school-record crowd of 102,315, and even the smallest crowd this season (92,863 for UTEP) would have been the second-best crowd of 2015. Have fans tuned out after the loss to Kansas or will they show up with so much on the line Friday?

Their last chance: Can a big win over TCU save Texas and Charlie Strong?

Q&A with a TCU beat writer: No Boykin, no Doctson leaves less room for error