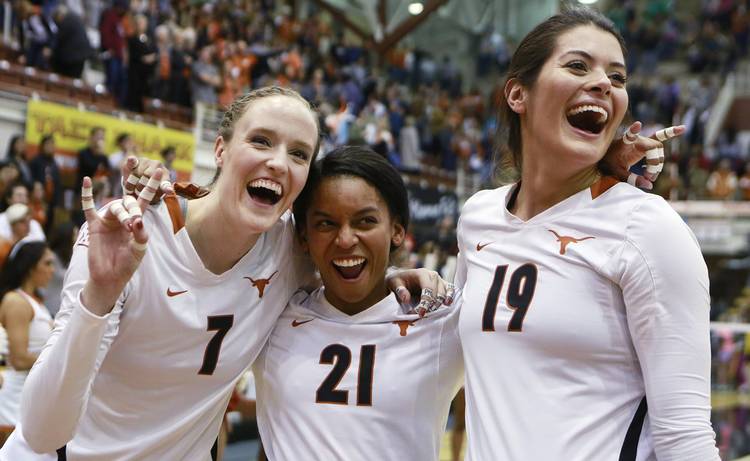 When Chloe Collins first met Nicole Dalton and Paulina Prieto Cerame, she couldn’t imagine that they’d be chasing a national championship together their senior season.

Their friendship began nearly 7,000 miles away from Austin, years ago, before any of them had arrived on the Texas campus. They were teammates in 2011 with the U.S. national team at the FIVB Girls’ Youth World Championship, in Turkey.

Collins, though, is a year younger than Dalton and Prieto Cerame, and they would be headed to different schools.

Fate, though, would bring them back together. Dalton, a setter, reshirted her sophomore season at Texas to recover from hip surgery. And Prieto Cerame sat out her freshman season at Penn State before transferring to Texas in 2014.

On Saturday, the three seniors will take the court at Gregory Gym for the fifth-ranked Longhorns’ regular-season finale against West Virginia.

“For us to end up together, we’re just like, ‘It was meant to be,’” Collins said.

Collins, whose 3,385 career assists ranks seventh on UT’s all-time list, will graduate in December with a degree in corporate communications, which she’ll fall back on if her plan to play professional volleyball falls through.

“She’s already the most athletic player on our team,” said coach Jerritt Elliott, who notched his 400th Texas win last week against Kansas State. “She’s got great hand-eye coordination. What sets her apart is she’s so fast. She’s fluid and she jumps well. She’s got every great characteristic except that she’s not tall.”

Texas’ 5-7 facilitator hasn’t let her size stop her from becoming one of the best setters in the Big 12. Her 11.32 assists-per-set average is the third-best in the conference. But it’s her intangibles that set the Cypress native apart.

Elliott credits her vocal leadership for helping a young Texas squad manage lofty expectations and overcome early adversity. Her teammates, meanwhile, find her energy and passion to be contagious.

“Her personality and the way she interacts with people on the court is really fun,” Dalton said.

“I just love whenever I get a kill and I come back and she’s celebrating with me, going all out,” Prieto Cerame added.

But what Collins most wants to celebrate is a national championship, a feat that has barely eluded her every year so far. Texas lost in the national semifinals in both her freshman and sophomore seasons, and was swept by Nebraska in the championship match last year.

“I think about it every single day,” said Collins, who had 39 assists and 12 digs against the Huskers. “It’s always a bitter taste in your mouth, just knowing that it was right there and you let it go.”

The path to redemption starts Sunday night, when the NCAA announces the seeding for the postseason. Texas (21-4, 13-2) will host first- and second-round matches at Gregory Gym, but ultimately the Longhorns are looking to be the only team left standing Dec. 17 in Columbus, Ohio.

“Right now the past two matches we’ve been playing some of our best volleyball,” Collins said. “Hopefully we continue that into the tournament.”

Staff takes: With so much on the line, which Texas will show up on Friday?

Tom Herman: ‘I’m not going to talk about any other job’ except Houston