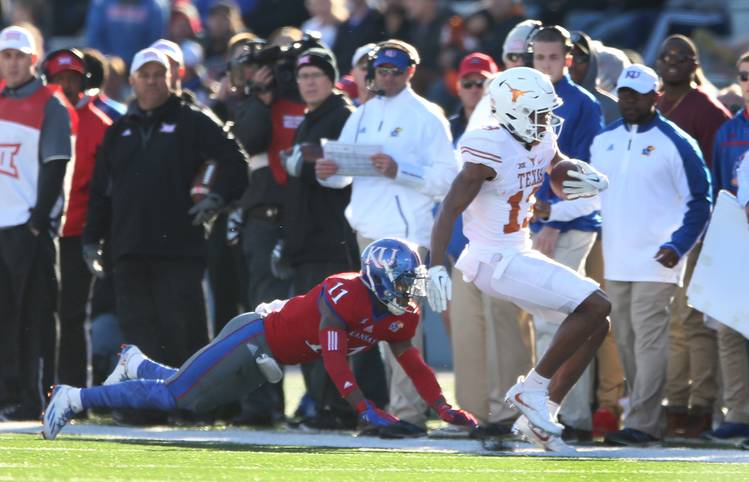 Texas's #13 Jerrod Heard carries the ball as Kansas's #11 Mike Lee tried to stop him during the first half in Lawrence, Kansas on Saturday, November 19, 2016. DEBORAH CANNON / AMERICAN-STATESMAN

BRIAN DAVIS: Who knows which Texas we’ll get?

One of this team’s biggest problems under Charlie Strong has been unpredictability. Nobody knows which Texas team will show up on any given week. So on a must-win Friday, will we get the team that knocked off four consecutive top-12 teams? Or will we see the same bunch that got embarrassed at Iowa State (2015) and Kansas (last Saturday)? Nobody, certainly not Strong, can say for sure. The Longhorns must win in convincing fashion for the current coach to even have a shot at returning. But TCU is no slouch. In fact, the Frogs are likely to come to Austin and play rock-solid.

I’m a simple man who wouldn’t mind a little entertainment while I work alongside 90,000 strangers on Friday. Even though Texas’ offensive engine has stalled an an incredibly inconvenient time, the Longhorns are still scoring at the best rate of Charlie Strong’s tenure. But those 34 points per game have come without any reverses, flea-flickers or throws to offensive linemen. So here’s hoping Sterlin Gilbert wakes me up from my turkey-based coma with a trick play or two, and that D’Onta Foreman gets to add a halfback pass to his Heisman highlight reel.

I’m expecting a big Longhorns victory. TCU isn’t very good. Texas has played well at home all year and should rally around Charlie Strong in a show of support and beat the Horned Frogs. Neither team is bowl-eligible yet, so both have that carrot in front of them. But a healthy dose of D’Onta Foreman and inspired defense should be enough to get Charlie his sixth win of the season.

Charlie Strong told ESPN’s Kirk Herbstreit that the Texas administration hasn’t told him if he would be retained for a fourth year or relieved of duty. Texas could have made things a lot easier had it just informed the coach of its intent in the days after the disaster in Kansas. Assuming Strong is being honest — and I take him at his word — the mishandling of this delicate situation should serve as a suitable warning for any future coach who doesn’t meet expectations.

The Eyes of Texas: Three Horned Frogs the Horns will be watching

Going out in style? Collins, Dalton and Prieto Cerame want a volleyball title as they exit