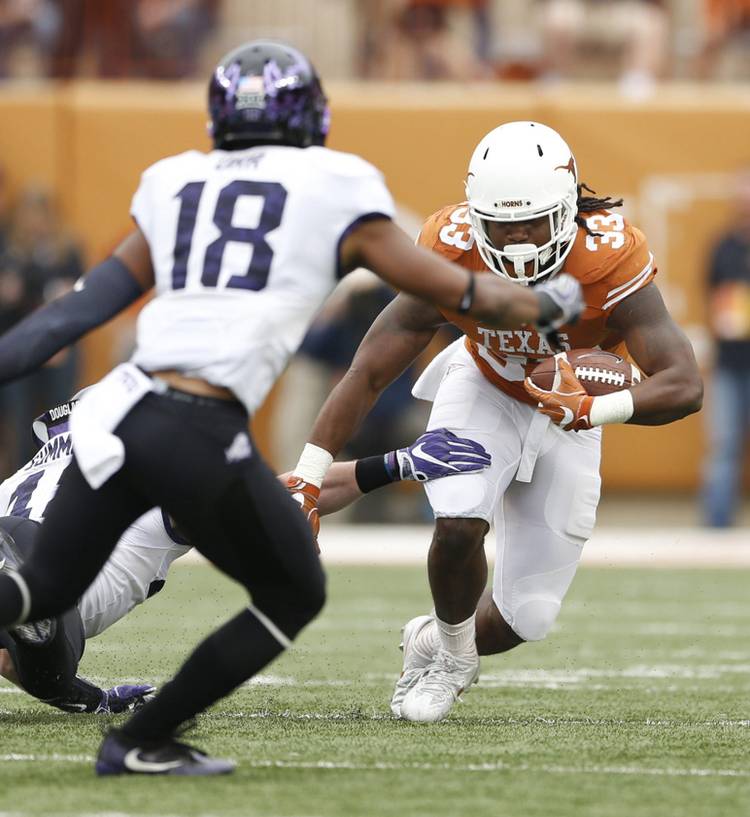 Instead of preparing for a bowl game, D’Onta Foreman must think about his future.

Following the 31-9 loss to TCU, Foreman was left to answer questions about the NFL Draft. The junior said he would talk to his family — and even Longhorns Legend Ricky Williams — about a decision he hopes to make as soon as possible, but he noted that the retention of Charlie Strong and wanting to win alongside his teammates would be factors for a possible return.

Foreman was clearly emotional after the game as he was guided off the field by back-up running back Kyle Porter.

To cap a season that has left him in contention for the Heisman Trophy, Foreman rushed for 165 yards on 31 carries. He was, however, stuffed on a fourth-and-goal attempt in which a replay confirmed that he did not get into the end zone. Foreman disagreed with the call.

“I definitely got in,” Foreman said. “It’s up to the referees to decide, so we can’t get it back.”

Foreman moved into second place on Texas’ all-time rushing list in the first quarter, and a 44-yard burst in the third quarter lifted him over the 2,000-yard mark. The second Longhorn to reach 2,000 rushing yards, he was acknowledged during the game on the Texas jumbotron.

Foreman, who was injured for a 41-7 win over UTEP on Sept. 10, finished the season with 2,028 rushing yards, and he extended his school-record streak of consecutive 100-yard games to 13. Among Longhorns, Foreman’s 2016 performance was only bested by the 2,124 yards that Williams accumulated in 1998.

New kicker: Usually used on kickoffs, junior walk-on Mitchell Becker was 2-for-2 on field goals against TCU. Becker was good from 24 and 31 yards.

Becker was inserted into place-kicking duties after senior Trent Domingue missed a 38-yard kick in the second quarter. A graduate transfer from LSU, Domingue made 15 field goals during his only season in Austin, and he hit a game-winning try in the final minute of a 35-34 win over Baylor on Oct. 29. But Domingue also missed seven field goals and had four of his extra-point attempts blocked.  Three of those missed field goals came during three games that Texas lost by four points or less.

Listed on Texas’ roster as a punter, Becker last converted a field goal during his senior year at Clear Creek High.

Odds and ends: Sophomore Michael Dickson averaged 48.1 yards over his eight punts, and the Ray Guy finalist uncorked a 74-yard kick in the fourth quarter. That kick was tied for the sixth-longest punt in school history. … An announced crowd of 99,065 was the second-largest to see a game at Royal-Memorial Stadium this season. … Freshmen Collin Johnson and Devin Duvernay accounted for seven of Texas’ 16 receptions and 124 of the team’s 218 receiving yards… Sophomore linebacker Malik Jefferson, who was essentially sidelined for the past two games with a head injury, had two tackles, a sack and a forced fumble on Friday.

Texas offense goes out with a whimper, not a bang, as season closes

Texas OC Sterlin Gilbert could be out, too; ‘I knew the situation’