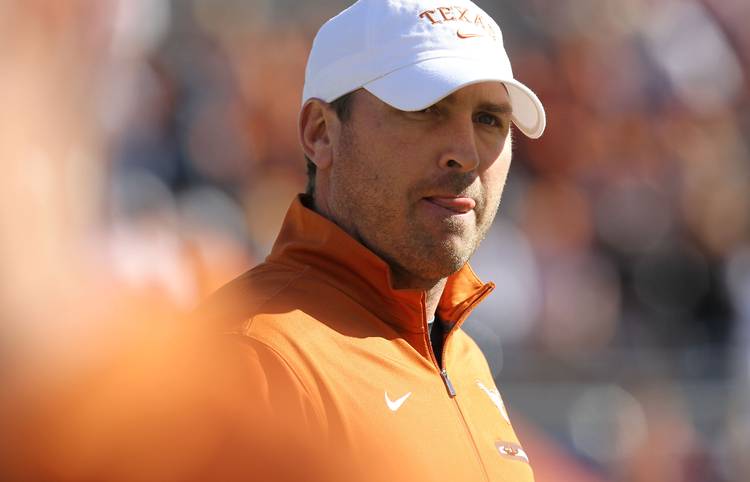 Offensive coordinator Sterlin Gilbert knew the stakes. He came to Austin knowing this could be a one-year stopover with the Longhorns.

And yet, Gilbert came anyway, coaxed into joining UT after being wooed personally by the school president last December.

“The thing about coaching nowadays, every year is a new year and every year is seemingly a risk year,” Gilbert said after Texas’ 31-9 loss to TCU on Friday. “I knew the situation. But the opportunity to be here and face up to the challenge… we just fell short.”

Gilbert knew he was dealt a difficult hand. At the beginning of the season, the Longhorns had two 250-pound running backs in D’Onta Foreman and Chris Warren III running behind an experienced offensive line.

The run game was supposed to help ease the pressure on freshman quarterback Shane Buechele, who won the starting job during training camp. Warren went down with a knee injury against Oklahoma State. But Foreman went on to become only the second 2,000-yard running back in school history.

Under Gilbert, the Longhorns saw jumps in points and yards from previous seasons. Still, the team finished the year 5-7 and will miss the postseason for the second straight year.

Asked if the staff ever had an idea this wouldn’t click, Gilbert said, “Going into today, trying to get bowl eligible. There was never anything like that. It was fight, it was battle, let’s get our kids regrouped, let’s keep progressing with our kids, keep pulling our kids along, stay together, let’s fight through the noise and just keep going.”

Quarterback Shane Buechele threw three interceptions last week in a dismal loss to Kansas. Against TCU, he completed 16 of 39 passes for 218 yards and was sacked four times.

Buechele never looked completely on, outside of a 48-yard strike to Devin Duvernay. The Horns got inside the Frogs’ 30-yard line six times on Friday but didn’t score a single touchdown. Trent Domingue and Mitchell Becker hit three field goals.

“It was just a lack of execution,” Buechele said, repeating a line he’s used all season long. “I’m frustrated in myself because we didn’t do enough to get these seniors to a bowl game.”

Texas notebook: Foreman gets his 2,000 yards, but is the NFL Draft next?

Three and out: Texas fires Charlie Strong after 16-21 record