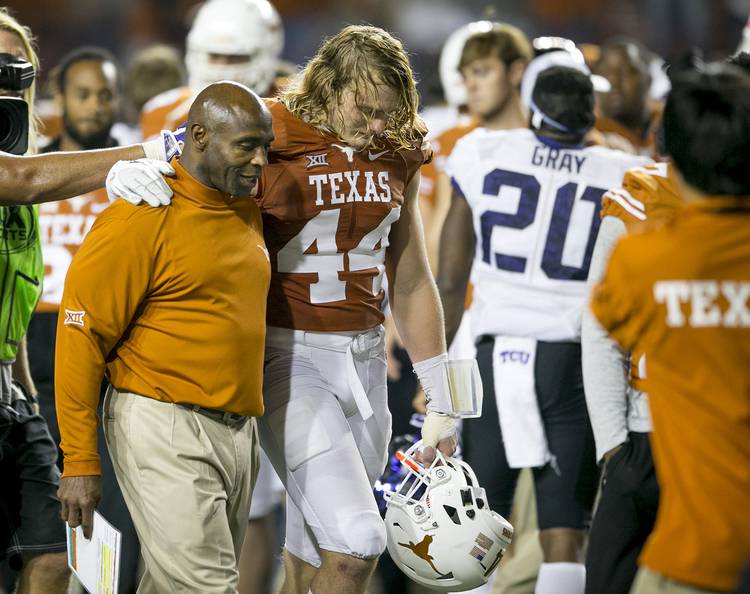 WHY TEXAS (5-7, 3-6) LOST: Your guess is as good as ours. Why hasn’t this team, with its collection of highly-rated recruiting classes over the past two years, shown up and played like it’s had to? The Longhorns won their fifth game back on Nov. 5, giving them three shots against West Virginia, Kansas and TCU to win one game and make a bowl. Didn’t happen, and two of those three losses came at home. The inability to punch it into the end zone on three fourth-and-goal situations meant Texas came away with only two field goals. We’ve likely seen the last of D’Onta Foreman, who’ll probably take his 2,000 yards into the NFL Draft, which means we may also have seen the last of those run-into-the-middle-of-the line play calls from Sterlin Gilbert. The energy wasn’t there on Friday. Neither was the effort. Charlie Strong, fighting for his job, needed both. So did Texas, fighting to avoid becoming the first team to miss a bowl game in back-to-back years since John Mackovic’s first two teams in 1992 and 1993.

WHY TCU (6-5, 4-4) WON: The Horned Frogs pressured Shane Buechele. TCU’s one of the best in the country when it comes to sacking quarterbacks. It showed on Friday; Shane Buechele was sacked four times and was off the mark on his throws throughout the day; he was only 16 of 39 on the day, and he ended the season with two of his three lowest-yardage games of his freshman year. Kyle Hicks gets most of the rushing glory, but Darius Anderson (3 carries for 103 yards, including a 70-yard touchdown) and Trevorris Johnson (11-68-1) played important roles in the victory. And they’re listed fourth and fifth on the depth chart. Kenny Hill wasn’t spectacular, but was spectacular enough on that 41-yard touchdown run. Credit the defense, which kept Texas out of the end zone and forced eight punts.

THE EYES OF TEXAS: … were on three specific Horned Frogs — Hill, the former Texas A&M starter who had produced three 400-yard passing days in his first season at TCU; Turpin, who burned Texas for four touchdown passes in last year’s game; and safety Nick Orr, who had four interceptions on the season.

Turpin was injured and didn’t make a catch.

Orr had nine tackles, third-most on the team.

Offense: D’Onta Foreman. He fell short of Ricky Williams’ single-season rushing mark, but did become only the second player in UT history to rush for 2,000 yards in a season. We probably won’t see No. 33 back next season.

Defense: Davante Davis. He finished with only three tackles, but one of them was huge — his open-field stop of TCU returner Deante Gray’s 58-yard kick return that surely would’ve gone for a touchdown.

(1) If he does leave for the NFL, Foreman finished his UT career with 2,782 yards. That’s No. 9 in school history. And Shane Buechele finished with 2,958 passing yards, the seventh-best single season by a UT quarterback.

(2) Michael Dickson, a Ray Guy Award finalist, averaged 48.1 yards in his final game and included a 74-yarder that pinned the Frogs at their 3-yard line.

ON DECK: The offseason. There’s no bowl game to wait for. The star running back will probably jump ship and enter the NFL Draft. And the head coach may be fired before the weekend’s over. Or not. There’s lots of questions surrounding the coach, team and program. But consider this: Freshmen and sophomores combined for 142 starts this season, there’s only one senior on the offensive line and 13 of the top 18 tacklers should be coming back. There are questions at head coach, defensive tackle, safety and kicker to answer.

Charlie Strong hopes to return for 2017, but ‘I have not been told’