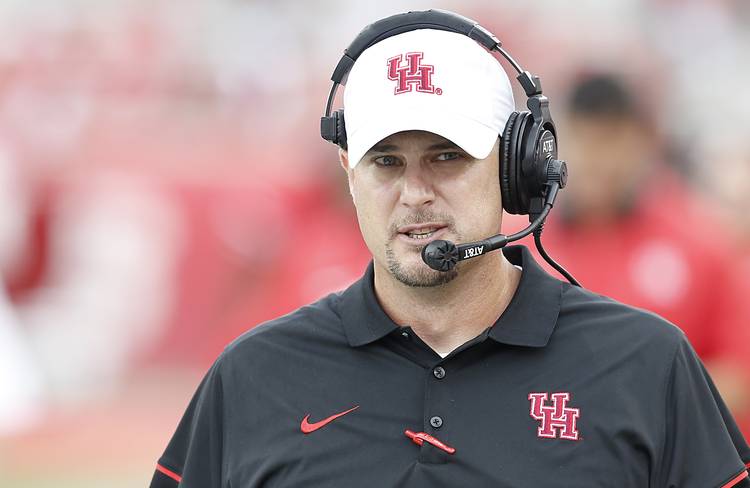 Former Houston head coach Tom Herman walks the sidelines as he coaches against the Lamar Cardinals in the second quarter at TDECU Stadium on September 10, 2016 in Houston, Texas. Houston won 42-0. (Photo by Thomas B. Shea/Getty Images)

In a wild two-hour span Saturday morning, University of Texas officials met with and fired head football coach Charlie Strong and lined up his successor, who was waiting and ready to go in Houston.

Tom Herman, the hottest coaching prospect in college football, informed University of Houston officials on Saturday morning that he was leaving the Cougars and joining the Longhorns.

“I’m excited to be the head coach at the flagship university of the greatest state in the union,” said Herman, who got his coaching start as a UT graduate assistant under Mack Brown in 1999 and 2000.

Herman is 22-4 in two seasons at Houston and holds a 6-0 mark against teams ranked in the Associated Press Top 25, including wins over Oklahoma and Louisville. Houston also lost to Navy, SMU and Memphis this season, though.

In a statement, Herman said he met with UT President Gregory L. Fenves and men’s athletic director Mike Perrin late Friday and into Saturday morning. Based on that timeline, those talks would have come before Perrin told Strong after dawn that he was relieved of his duties.

Herman and UT officials have agreed to a five-year contract worth more than $5 million annually. It escalates to more than $6 million, according to two sources. The final details need the approval of the UT System Board of Regents.

UT officials also owe their Houston counterparts a $2.5 million check for Herman’s buyout, according to the terms of his contract there.

Herman will be formally introduced at a news conference Sunday.

“The opportunity to come back to Texas is a dream come true for me and my family, and I can’t thank President Fenves and Mike Perrin enough for providing me with this incredible opportunity,” Herman said.

UT’s search for a new baseball coach last summer lasted an entire month. The search for a football coach took hours, a mind-blowing speed record for a university that usually moves at a deliberate pace.

“Tom was the hottest young head coach in the country the past two seasons, and I am thrilled we are able to get him back to UT to lead Texas football,” Fenves said in a statement.

Herman learned under Brown and earned a master’s degree in education in 2000. He became a receivers and special teams coach at Sam Houston State in 2001, then worked at Texas State and Rice, and was named Iowa State’s offensive coordinator in 2009.

Herman’s career really took off as the offensive coordinator at Ohio State. The Buckeyes won the 2014 national title with third-string quarterback Cardale Jones at the controls in two playoff wins. Immediately after the game, Herman was seen running around the field at AT&T Stadium wearing a Houston hat as a savvy way of repping his future employer.

Even as he succeeded at Houston, it was widely believed Herman would crawl to Austin for a chance to coach the Longhorns. Just last week, Las Vegas oddsmakers had him as the only betting candidate to be Texas’ coach in 2017, according to Bovada. It was a Yes or No wager.

“I am impressed with his insights on college sports, football and academic success, and his philosophy of developing the student-athlete into the complete person,” Perrin said in a statement.

Strong once said that Texas was not a “gimmick” program. But Herman isn’t your father’s or grandfather’s coach.

Herman, 41, once got a diamond-encrusted grill made for his mouth to fulfill a promise to his team after Houston won the American Athletic Conference title. He loves 1990s hip-hop music, can talk to 17-year-old recruits just as easily as he does to 60-year-old millionaires and loathes erroneous reporting.

The New York Times wrote an extensive piece in October detailing how Herman kisses players on the cheek before games. “How do you motivate a human being to do things against his own nature?” Herman told The Times. “There’s two things: love and fear. And to me, love wins every time.”

With his authentic personality and disarming charm, Strong might be one of the most well-liked individuals ever to work inside the UT athletic department. But for coaches, it always boils down to wins and losses.

Strong was five games under .500 after three losing seasons, the first time that’s happened at UT since 1936-38.

UT officials first reached their decision to fire Strong after an embarrassing overtime loss to Kansas, one of the worst teams in the nation. However, Fenves did not make any formal announcement during Thanksgiving week, opting instead to let Strong finish out the regular season.

Strong might have had a chance to save his job with a blowout win over TCU. But the Horned Frogs won 31-9 in decisive fashion Friday at Royal-Memorial Stadium. That performance removed all doubt.

“In the end, the results over three seasons were not there,” Fenves said in a statement about Strong’s dismissal. “It was not clear the future was going to be at the levels expected of Longhorn football.”

Also in a statement, Perrin said, “This was an important year for our program to take the next step, and the results simply aren’t there, so we’ve decided to make a change.”

Strong had two years remaining on a guaranteed contract worth $10.7 million. His nine assistant coaches were guaranteed to earn $4.5 million in 2017. Three assistants have deals that stretch into 2018, and Texas is on the hook for those as well. However, if any assistant lands another job, UT will offset whatever that coach does not make from his new school.

Texas athletics is self-sufficient and does not use public money. All coaching salaries are paid through private donations.

“I want to wish Charlie Strong and his family great success in the future,” UT System Chancellor Bill McRaven tweeted. “He is a real leader who coaches with class and integrity.”

Some assistant coaches cleaned out their office; others went home. In a message to the American-Statesman, one assistant said, “God bless and Hook ’em.”

In a final statement released by UT athletics, Strong said, “I don’t regret coming to Texas. I learned a great deal and grew as a person in my time here. I’ll miss the opportunity to lead this program going forward, but I’m ready to accept my next challenge.”

Thanksgiving night was a wild one for the Herman camp. Horns Digest and ESPN reported that Herman was close to reaching a deal with Louisiana State University officials to become their next coach.

It’s unclear whether that was a smoke screen or something meant to motivate Texas.

On Saturday morning, LSU officials announced that coach Ed Orgeron would have his interim coach tag removed. That announcement made it clear Herman was most likely headed to Texas.

“The entire University of Houston community wishes he and his family continued success in this new chapter in their lives,” Houston athletic director Hunter Yurachek said in a statement.

Tilman Fertitta, the chairman of the UH System Board of Regents, said this was not about money. The school bent over backward to keep Herman, including offering him a seven-figure raise last week.

“Texas is Texas,” Fertitta told the Houston Chronicle. “As great as the University of Houston is, it’s not the same opportunity. It’s no different than asking somebody, ‘You want to be governor of Rhode Island or governor of Texas?’”

Herman told his Houston players about his decision and then left the UH facilities. Trailed by reporters, he got into a white Ford SUV and escaped.

Herman’s staff has yet to take shape, but he’s expected to bring Fernando Lovo, his right-hand man at UH, as director of operations.

Houston offensive coordinator Major Applewhite, a former Texas quarterback, might not come back to Austin. Applewhite is a key figure in the long-running lawsuit filed by former track coach Bev Kearney against the school claiming race and sex discrimination.

“I am eager to get to Austin as soon as possible, to spend time with our student-athletes and to get to work,” Herman said.