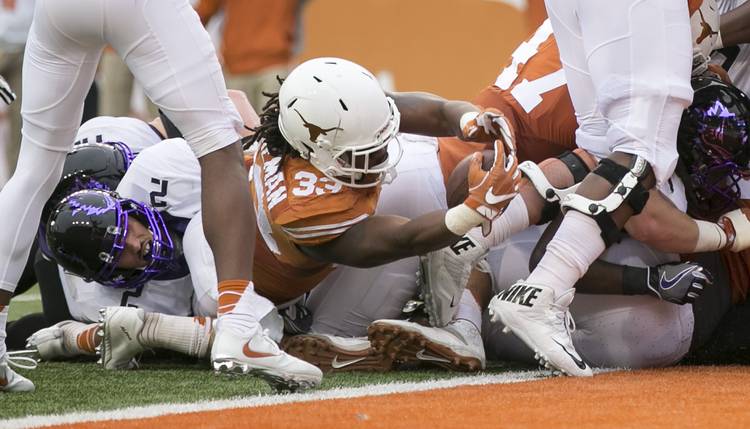 UT running back D'Onta Foreman reaches for the goal line but is stopped short in the second quarter against TCU at Royal-Memorial Stadium on Friday November 25, 2016. JAY JANNER / AMERICAN-STATESMAN

There were 161 snaps taken in Texas’ 31-9 season-ending loss to TCU on Friday. Here are five that ended up making a big difference:

TCU never trailed on Friday; the Horned Frogs forced a Texas punt to open the game, then put together an eight-play scoring drive. TCU quarterback Kenny Hill was 6 for 6 on the drive, for 65 yards, and scored the touchdown on a 4-yard run. It was the first of two touchdown runs from Hill; his 41-yarder near the end of the third quarter was another big one. The Texas A&M transfer accounted for 228 yards of total offense (150 passing, 78 rushing). This season, eight of 12 opponents scored on their opening drive of the game.

Texas made it to TCU’s 30-yard line five different times in the first half, yet managed only six points by halftime. The biggest miss came when running back D’Onta Foreman was stuffed on a fourth-and-goal run from TCU’s 1 in the second quarter. Replays indicated that he flirted with the goal line, but officials upheld the ruling on the field. Both Foreman (“I definitely got in. It’s up to the referees to decide, so we can’t get it back.”) and offensive coordinator Sterlin Gilbert (“When I saw it on the review, I felt good about it.”) disagreed with the call.

TCU, leading 7-6 at halftime, added a 28-yard field goal on its opening possession of the second half. Texas countered with a 31-yard field goal of its own. The big play on the drive, however, was a 44-yard run by Foreman down to the Horned Frogs’ 12-yard line. On that run, Foreman exceeded 2,000 rushing yards for thes season, becoming only the second Longhorn to rush for 2,000 yards (Ricky Williams had 2,124 yards in 1998, his Heisman Trophy year). Foreman finished with 2,028 yards. According to sports-reference.com, there have been 28 2,000-yard rushers since 1956. Foreman, though, is only the fifth on that list to play on a team with a losing record.

Hill’s second touchdown run gave TCU a 17-9 lead in the third quarter, and Texas pulled out an old trick as it attempted to claw back into the game. Following a sack of quarterback Shane Buechele, Texas sent in Tyrone Swoopes for a second-and-18 at its 28. Running out of the 18-Wheeler package, Swoopes picked up 12 yards. The Longhorns opted for another Swoopes run on third down, but the senior picked up only three yards on his last collegiate carry. The 18-Wheeler package had been parked since the Texas Tech game in early November, but it made a short appearance on Friday. Swoopes, however, was unable to re-capture the magic of his three-touchdown performance against Notre Dame on Sept. 4.

5. Running away with the game

The Longhorns were still in the game in the fourth quarter when Michael Dickson’s 74-yard punt pinned the Horned Frogs at their own 3-yard line. TCU responded, though, with an eight-play touchdown drive of 97 yards that essentially put the game out of reach with nine minutes to go on Travorris Johnson’s 5-yard run. Foster Sawyer, who replaced an injured Hill on the drive, completed a 28-yard pass on the possession, but the Horned Frogs mainly kept it on the ground. En route to giving TCU a 24-9 advantage, Johnson had five of TCU’s seven carries on the drive.