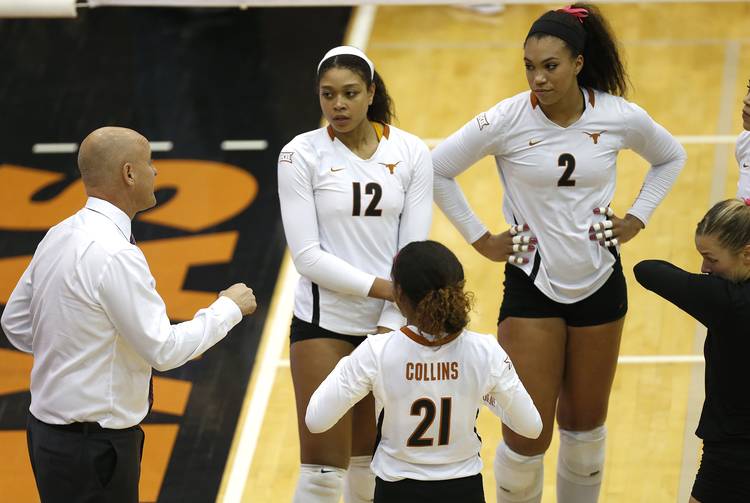 The Texas volleyball team stopped short of one usual destination this season. Now the Longhorns mobilize for what they hope is a trip to someplace else where they have almost annual reservations.

The No. 5-ranked Longhorns defeated West Virginia 3-0 on Saturday in front of 3,787 loud, engaged fans at Gregory Gym in their final regula- season match, but they failed to win the Big 12 championship for the first time since 2010.

On Sunday evening the Longhorns will find out matchups to start the NCAA Tournament, an event in which Texas has reached the Final Four seven of the last eight years, winning the national title in 2012.

Saturday’s 25-18, 25-13, 25-14 victory against West Virginia on senior day boosted the Longhorns’ record to 22-4 overall and 14-2 in the Big 12, good for second place, one game behind fourth-ranked Kansas. The Longhorns and Jayhawks split their two regular-season matches, but Texas lost at Iowa State 3-2 on Nov. 12.

“We put ourselves in that position,” setter Chloe Collins said. “Learn from it, and look forward to the NCAA Tournament.”

Texas has won three straight matches, losing just one set since the defeat at Iowa State. Of the three teams Texas recently defeated, only one, Kansas State, has a winning record. Even so, coach Jerritt Elliott believes the Longhorns have gained momentum going into the postseason.

“We’ve been building confidence,” Elliott said. “The last three matches have been really good. We’re starting to peak at the right time. We’re starting to be more patient, and let the game play the way it should be played with a high level of thought process, patience and execution.”

Collins had 34 assists. Elliott was encouraged by middle blockers Yaazie Bedart-Ghani and Morgan Johnson, sophomores who took on more responsibility when senior Chiaka Ogbogu, Texas’ all-America middle blocker, was lost for the entire season because of academic issues.

Bedart-Ghani led Texas with 10 kills against one error. Johnson had nine kills without an error and matched a career best with eight blocks.

Elliott said Johnson, who also tied her career high with eight blocks, had to make a big adjustment moving from a secondary to primary role.

“I’ve been hard on her all year long,” Elliott said. “Probably harder than on anybody else. She’s now starting to show that her work and her level of play at the (primary blocker) is good. She’s committed to herself in terms of her conditioning, and she’s getting to the point where she is becoming very dominant as a slide hitter, learning to be good at that and have more range.

“Yaazie has come along as well.”

Johnson said the process was not easy for her.