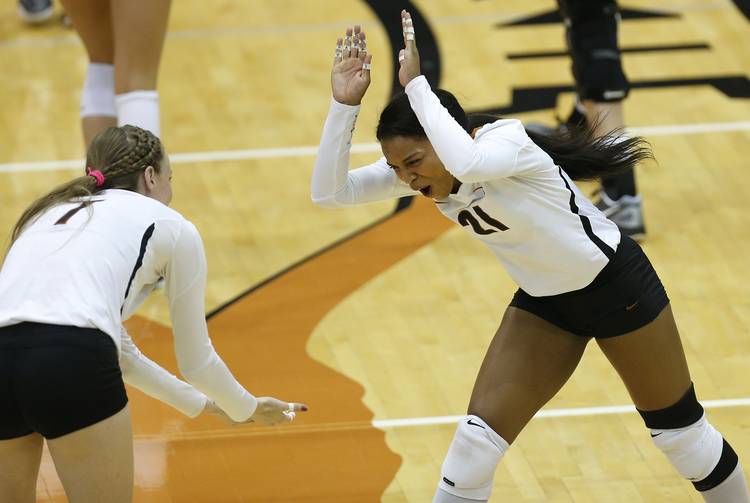 If Texas wants to get to Columbus, Ohio, the Longhorns are going to need to survive two weekends in Austin.

Texas snagged a No. 1 seed for the NCAA volleyball tournament on Sunday night. Anchoring a Texas-heavy section of its region, Texas (22-4) will host UT-Rio Grande Valley (21-13) on Friday. SMU (25-7) or Texas A&M (21-8) await if the Longhorns knock off UTRGV, and that second-round match would also be played in Austin.

Gregory Gym will host third and fourth-round matches should Texas win twice this upcoming weekend. That means that Texas would not have to travel in the postseason until the Final Four, which is set to be held in Columbus from Dec. 15-17. Texas has reached the Final Four in seven of the past eight seasons, and the Longhorns were national champions in 2012.

“Our fans are some of the best in the country, and playing at home, we’re used to that,” Texas senior Paulina Prieto Cerame said. “I definitely think that it’s a (comfort). We have that advantage, but we’ve got to be on our ‘A’ game.”

After doling out top seeds to Nebraska, Minnesota and Wisconsin, the NCAA selection committee gave its final No. 1 designation to Texas. The decision came at the expense of Kansas, which split its season series with Texas and finished a game ahead of the Longhorns in the Big 12 standings. Kansas had to settle for the second seed in Texas’ region.

Texas was rewarded for a challenging non-conference schedule. Two of Texas’ four losses were against Nebraska and Wisconsin, and only three of Texas’ non-conference foes are not in the NCAA tournament’s field. Knowing the strength of its calendar could be a factor in seeding, Texas intentionally adopted a stringent schedule.

“You schedule your matches, but you’ve got to make a good, educated guess and spend some time looking at teams and who you’re going to be playing,” said Texas coach Jerritt Elliott, whose team went 10-2 against the five other Big 12 teams that received invitations to the tournament. “Our studying was the advantage for us and ultimately allowed us to be a one seed.”

Texas is 13-1 at Gregory Gym this season, with that last victory being a sweep of West Virginia this past Saturday. The Longhorns have won nine of their 10 sets since a five-set setback at Iowa State, which will open the NCAA tournament against Purdue.

The Longhorns are led by outside hitter Micaya White, a seven-time Big 12 freshman of the week who is averaging 4.07 kills per game. Junior Ebony Nwanebu (3.67) and Prieto Cerame (3.55) rank fifth and seventh in the Big 12 in kills, and senior setter Chloe Collins is quarterbacking the offense with 11.33 assists per set. Junior libero Cat McCoy directs a defense that is holding teams to a .202 hitting percentage.

“You look at the record and you see the four losses and you’re like ‘Oh, what happened’ or ‘What’s going on,'” Prieto Cerame said. “I think the trials have made us a more mature team, and we’ve become more patience each time. We’re going back to basics and enjoying the game.”

How much is it costing Texas to get Tom Herman? How about $19 million?