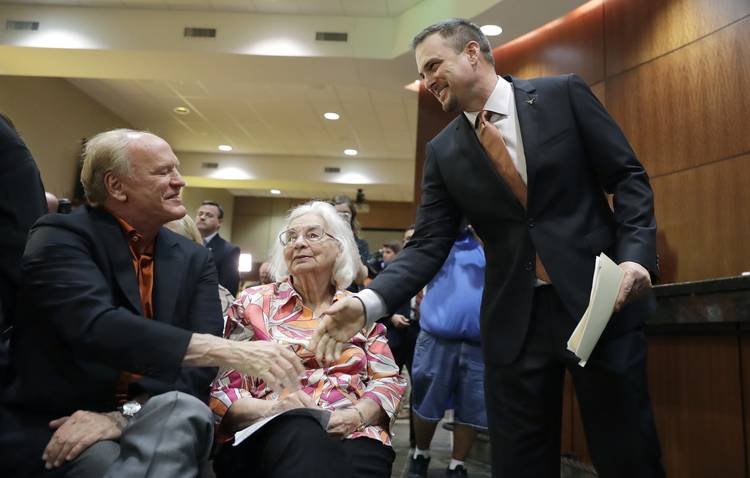 Texas coach Tom Herman met with Charlie Strong’s assistants on Monday, but none is likely to be retained, two sources told the American-Statesman.

“We were told to find jobs,” one of Strong’s assistants said.

During his introductory press conference on Sunday, Herman joked that “I’ve been here six hours.” But considering Texas is his dream job, it’s difficult to believe he hasn’t thought about his dream team.

“The most important thing for me right now is the players in the locker room for the University of Texas and getting on the road recruiting,” Herman said. “We’ll let the staff piece kind of play itself out over the next couple of weeks, but (I) haven’t given it much thought.”

A Houston source confirmed that all four coaches are expected to join the Longhorns.

UT President Gregory L. Fenves said both he and athletic director Mike Perrin view the football coach as “the CEO of the football program.” In that role, Herman “has responsibility and great latitude in putting a staff together, and we will be looking at his staff recommendations.”

When Strong came from Louisville in January 2014, he brought along three assistants and his director of operations, too.

All Texas assistant coaches’ contracts must be approved by the UT System Board of Regents.

Giles, an all-Southwest Conference defensive lineman at Texas in the early 1990s, was at the press conference on Sunday wearing a gray shirt with no school logo. He stood in the back of the room with a cellphone glued to his ear.

For a brief time on Monday, Warehime had a UT photo on his Twitter bio with a line stating he was the offensive line coach at Texas. After it got noticed, the UT-themed photo and language was quickly erased and replaced by a generic family photo.

It’s still unclear who Herman will tap to become his offensive and defensive coordinators.

Major Applewhite, Herman’s offensive coordinator at Houston, may not be allowed to return to UT considering his role in the ongoing legal battle between the university and Bev Kearney. The former track coach is suing the school for race and gender discrimination.

Applewhite gave a deposition in the Kearney case in 2014. The transcript is still under seal.

Houston’s defensive coordinator Todd Orlando was named the Cougars’ interim head coach for the upcoming bowl game. Both Orlando and Applewhite are candidates to get the permanent UH job.

“We wouldn’t be able to do the things that we’ve done at the University of Houston without a great staff, and by that I mean the nine assistants, the strength staff, the support staff, and everybody around our program builds us up,” Herman said.

Sam Ehlinger, Texas’ other recruits are staying strong with their commitments