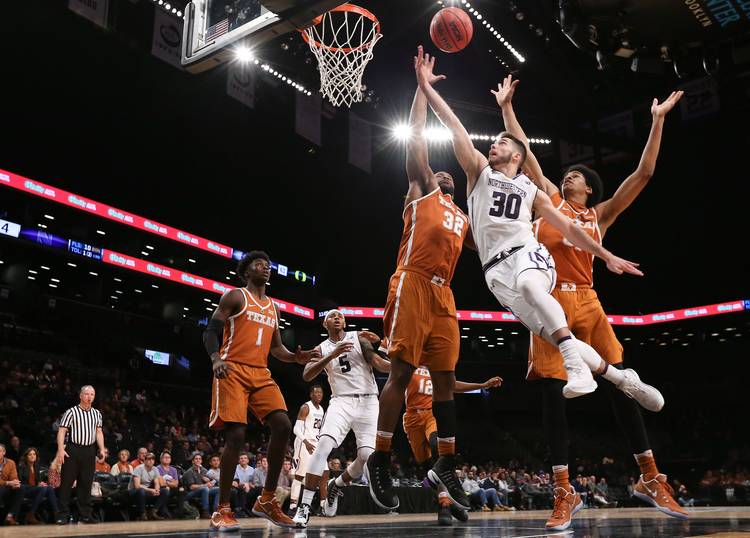 Bryant McIntosh (30) of the Northwestern Wildcats puts up a shot on Shaquille Cleare (32) and Jarrett Allen (31) of the Texas Longhorns in the second half of the 2016 Legends Classic at Barclays Center on November 21, 2016 in the Brooklyn borough of New York City. (Photo by Michael Reaves/Getty Images)

When the young Longhorns walked into Barclays Center last week, there was an overwhelming sensation.

In the pits of their stomachs.

“They had the game lights on where the bright lights are on the court and the rest of the arena is dark,” Texas coach Shaka Smart said. “For some of these guys, it was like, ‘Whoa.’ A little bit of deer in the headlights.”

The Longhorns went to Brooklyn for what was supposed to be two games against fairly even teams. But Texas suffered a 77-58 loss to Northwestern and followed that with a 68-54 loss to Colorado the next day. Suffice to say, there were plenty of teachable moments for Smart’s coaching staff.

Thanks to those two defeats, the Horns (3-2) fell out of the Associated Press Top 25 poll on Monday. Smart will see how well his charges respond with two home games this week, the first coming Tuesday against UT-Arlington (4-3).

Against Northwestern, Texas had two long scoring droughts in the first half, 14 turnovers and only seven assists. Freshman James Banks was ejected after being called for a flagrant 2 foul for fighting and had to sit against Colorado. Tevin Mack was the only player in double figures with 18 points.

“I told the team this before the second game,” Smart said. “What you guys are going through right now is, this is harder than you thought. That sometimes happens with young players.

“We all in life would things to be simple and easy, and that’s just not in sports, but it just doesn’t work that way,” he added. “So now, what do you do when it is hard? How do you respond?”

The Buffaloes also lost their first game in Brooklyn and responded by getting after it on the boards against the Horns’ thin frontcourt. Colorado won the rebounding battle by nine, scored 18 second-chance points and beat Texas with relative ease.

“You come to a place like this, you don’t want to go home 0-2,” Colorado coach Tad Boyle said.

Said Smart, “Any game that you lose is a setback. Basketball season is a long one. If you can learn from a setback, then it can actually can be something positive in the long run.”

The Horns were back home in time for Thanksgiving and had plenty of time to reset. Now they’ll face a UTA squad that forced overtime last season at the Erwin Center.

UTA will start the exact same five starters this season, including Kevin Hervey, a legitimate NBA prospect. Smart pointed out that all five starters Texas used that night are gone.

Once Isom gets cleared to play, he’ll be an interesting addition. Isom has a slender frame and can stretch defenses with his 3-point shooting ability.

Tom Herman’s first recruiting pitch wasn’t to an athlete, but to the state’s coaches