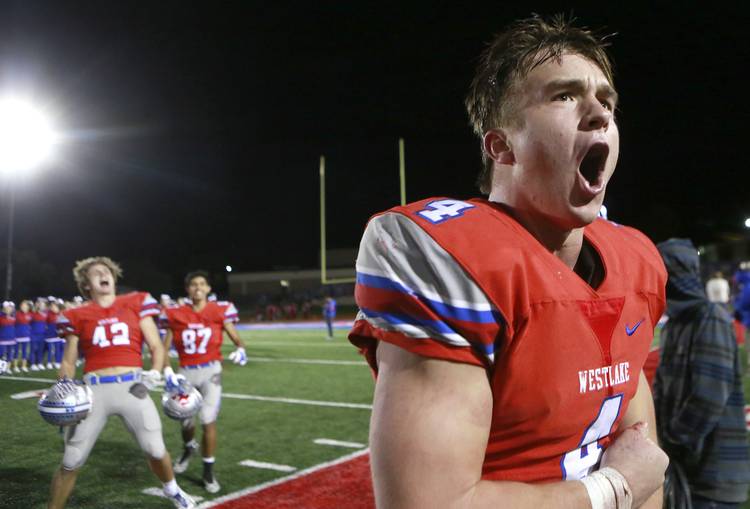 As he searches for answers to the Lake Travis defense this week, Westlake quarterback Sam Ehlinger is not questioning his future.

Ehlinger, a four-star prospect who committed to Texas in the summer of 2015, is the face of the Longhorns’ 2017 recruiting class. But he committed last year to Charlie Strong, who was fired last Saturday in favor of Houston’s Tom Herman, who was hired the same day.

Before Strong was fired, Ehlinger told the American-Statesman that he would enroll early regardless of who Texas’ coach is. In an interview with KXAN this week, Ehlinger said that plan hasn’t changed.

“Coach Herman has a bright future,” said Ehlinger, who also had an offer from Herman’s Cougars when he committed to Texas. “He’s the future face of college football. To get him here and get things rolling, he’s really going to turn things around. I believe it’s a really, really good hire.”

Herman met his new players at a team meeting Sunday afternoon prior to his introductory press conference. A day later, he started getting to know his new recruits.

Nacogdoches defensive back Josh Thompson, who committed this July, tweeted on Monday that he had already chatted with Herman. So did Lake Dallas defensive back Kobe Boyce. A day later, Ehlinger posted a picture with his new coach.

Hooks’ Montrell Estell told the Statesman that he’d missed his call from Herman on Monday, but that he’d already done some research on his future coach.

“I think he’s a great coach, seeing how he turned Houston around in two years,” Estell said. “That’s amazing.”

Herman inherits a class with only seven pledges from Strong, who was admittedly was not into hoarding early commitments. (Since it had a small senior class, Texas is also not expected to have a lot of open roster spots this offseason). Texas’ class is ranked 61st nationally by 247Sports’ composite ratings, though that has more to do with the size of the class; five of UT’s seven commitments are 4-star recruits.

On Sunday, Herman hinted at the sales pitch he’d give on the recruiting trail. He said recruits will get a chance to play with talented players at Texas, and that his teams will be both physically and mentally tough. He also stressed the character-building aspects of his program.

“They’re going to know that they’re going to get one of the premier educations in the entire country, living in the city in Austin and playing for a bunch of men that love them and want to build them into better husbands, better fathers and better employees,” Herman said. “Winning is just a byproduct of that love.”

Texas hasn’t lost any pledges since Strong was fired. Liberty-Eylau defensive end Lagaryonn Carson — the Longhorns’ highest-rated recruit who committed in October 2015 — has been vocal on Twitter about his unwavering commitment. Temple defensive end Taquon Graham said Herman was a “great coach” and remains firmly committed.

Like Ehlinger, Graham has other things to worry about this week. He and Ehlinger are the only Longhorns recruits whose teams are still in the state high school playoffs. Westlake is looking to end a nine-game losing streak against Lake Travis in the Class 6A Division I state quarterfinals. Temple is looking to advance to the Class 5A Division I semifinals with a win over Manvel.

Horns need a couple of upsets to move into bowl picture