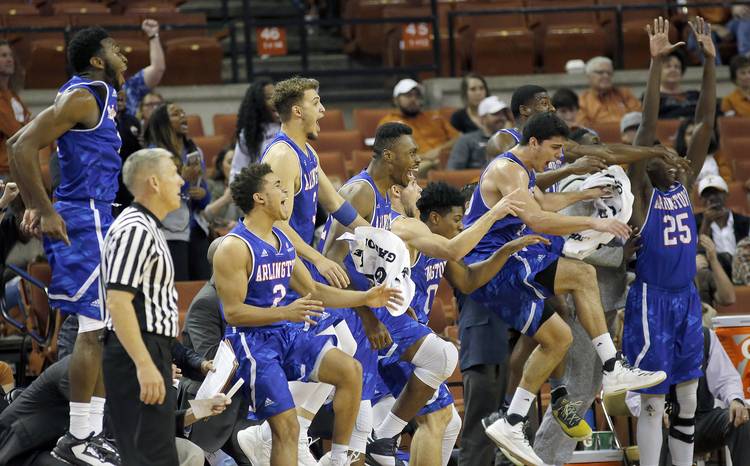 The UT-Arlington Mavericks bench reacts as they defeat the Texas Longhorns 72-61at the Frank Erwin Center on November 29, 2016 in Austin, Texas. (Photo by Chris Covatta/Getty Images)

These are jaw-dropping times for Texas athletics.

Coach Scott Cross, now in his 11th season, watched his Mavericks miss their first 11 3-point shots against the Longhorns. But UTA stormed back before halftime, took a 16-point lead after the break and captured a 72-61 win over the UT system’s struggling flagship basketball program, which is now 3-3 and mired in a three-game losing skid.

The hundred-plus fans in the Erwin Center’s upper deck could be heard loud and clear amid all the burnt-orange silence — “U-T-A!”

UTA first played Texas in men’s basketball on Nov. 28, 1989, but the Horns were 11-0 in the all-time series. In fact, Tom Penders, Rick Barnes and Shaka Smart won all those games by an average of almost 22 points. “Now we’re 1-11,” UTA guard Drew Charles said.

Sweating through his sport coat, Cross said, “This will definitely go down as one of the biggest wins in the history of our basketball program.”

Hervey, UTA’s best scoring threat, had 18 points and 10 rebounds. Charles had back-to-back killer 3-pointers that gave UTA a 59-43 lead with 6:45 remaining. Jalen Jones and Jorge Bilbao both added 10 points as Texas turned it over nine times in the second half alone.

“Disappointed with the game,” Smart said. “My wife has a great saying, in the absence of confidence, fight. We didn’t show nearly enough of that.”

Smart never blasted his team, never called anyone out. Some of it was just bad shooting; the Horns were 3 for 23 from 3-point range. Some of it was hustle; the Mavs won the battle on the boards by six.

“What we always try to do is paint a very realistic picture of what just happened and what needs to happen moving forward to play better and to keep games like this from repeating themselves,” he said.

Kerwin Roach Jr. had 16 points but a game-high six turnovers. “You’ve just got to go back in practice and just figure things out,” the Texas sophomore said.

The big-picture problems areas are easy to spot. Smart isn’t getting contributions from the players who must contribute, namely his veterans.

Seniors Kendal Yancy and Shaq Cleare started the game but had only two points and five rebounds for their efforts. They combined for 29 minutes.

Mack had 19 points and seven rebounds to go along with Roach’s totals. But UT’s third sophomore, Eric Davis Jr., continues to struggle with his shot. Davis was 0 for 8 from the floor, six of those coming from 3-point range. He had two assists and two turnovers in 20 minutes.

Those five veterans must shoulder the load — and a lot of the responsibility —  while the four freshmen continue to learn.

Jarrett Allen missed some easy outside shots, and James Banks lost the ball in midair while going up for a possible dunk. Andrew Jones and Jacob Young were 2 for 10 from 3-point range and got lost at times on defense.

“We do have some guys that are playing with a level of tension and playing not to make a mistake,” Smart said.

The Mavericks (5-3) had nothing to fear, especially after playing so well in Austin last season before succumbing in overtime.

Allen’s first-half dunk gave Texas an eight-point lead, but UTA whittled the lead down to two. Kaelon Wilson’s run-out bucket tied things up, and the Mavs took a 30-27 lead at the break on Hervey’s 3-pointer with 15 seconds left.

UTA opened the second half with a 10-2 run and took a 13-point lead on Bilbao’s layup. The Horns could never get the deficit back under double digits.

Horns need a couple of upsets to move into bowl picture