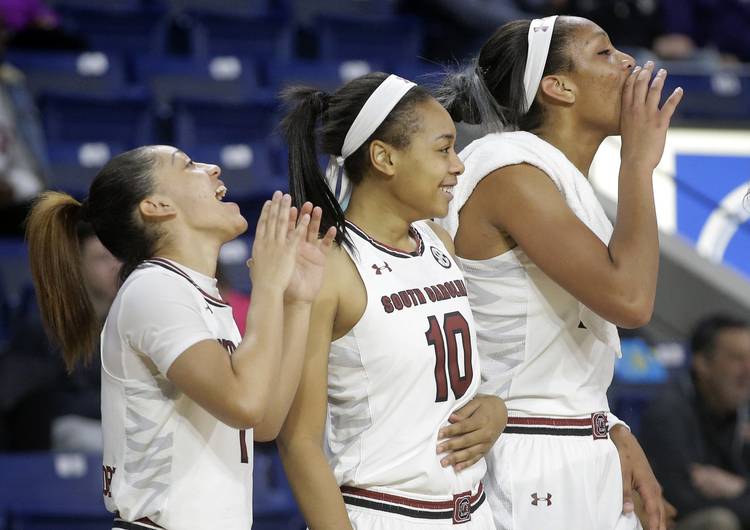 From left to right, South Carolina's, Bianca Cuevas-Moore, Allisha Gray and A'ja Wilson cheer from the bench during the first half of an NCAA Naismith Memorial Basketball Hall of Fame Women's Challenge game against Louisville, Sunday, Nov. 27, 2016, in Springfield, Mass. (AP Photo/Steven Senne)

Karen Aston is hoping Texas’ baptism-by-fire of a non-conference schedule will benefit the Longhorns when Big 12 play starts later this month.

No. 14 Texas has already lost games to No. 11 Stanford and No. 10 Mississippi State. The frying pan is even hotter now; the Longhorns (2-2) host No. 3 South Carolina on Thursday before playing at No. 2 Connecticut on Sunday, a rematch of last year’s NCAA Tournament loss.

The Longhorns hope free tickets to UT students will help fill up the Erwin Center on Thursday night.

While a victory over the Gamecocks would do wonders for the young Longhorns, Aston is more concerned about getting better in every aspect of the game.

“It’s a chance to take another test early in the season,” Aston said Wednesday. “We failed our first test (at Stanford) and we got maybe a C in our second test (at Mississippi State).”

Texas is still trying to find its identity after losing four seniors who helped last year’s team go 31-5 with a trip to the Elite Eight. All four of those players (Imani Boyette, Celina Rodrigo, Celina Rodrigo and Brady Sanders) “did their jobs” and each of them has been missed.

“I’ve probably told this year’s team to just do their jobs about one million times,” Aston said.

Perhaps no one has had to fill the void more than senior post Kelsey Lang, who can no longer find the 6-7 Boyette behind her shoulder. Among the players helping under the bucket is 6-3 freshman Joyner Holmes, a player who can play every position.

“With her size and strength at the (power forward) position, she’s a hard matchup for other post players,” Lang said.

Holmes has been inconsistent on offense, hitting 42.9 percent of her shots to average 11.5 points per game. Surprisingly, she leads the Longhorns with six boards a game.

Holmes, Lang and 5-9 forward Brianna Taylor will have one of their toughest challenges of the season against South Carolina. The tandem of 6-4 post Alana Coates, 6-5 forward A’Ja Wilson and 6-2 forward Kaela Davis averages 46 points and 23 rebounds a game.

No matter how Texas fares against the top-tier teams, the Longhorns believe they will benefit from the competition by March.

“Our tough schedule is helping us growing faster than anything else would have,” Lang said.

The level of competition will remain high when the Longhorns play host to Tennessee on Dec. 11.

“When you play these types of opponents, the players look forward to it, regardless of the outcome,” Aston said. “They like the competition and the measuring sticks that come along with it. … If you don’t play against challenging competition, some of the younger players can get a clouded vision of who they are.”

Among the bright spots for Texas has been the play of Taylor, a defensive specialist who has shown an improved offensive game. Through four games she is averaging 7.5 points while hitting on 66.6 percent of her shots from the field. By comparison, her career averages heading into the season were 4.5 points and 45 percent shooting.

Taylor said she worked hard with Aston and position coach Jamie Carey on improving her offense. As for the team, the Longhorns have a lot to look forward to.

“It’s early in the season and there’s so much time to grow,” she said.