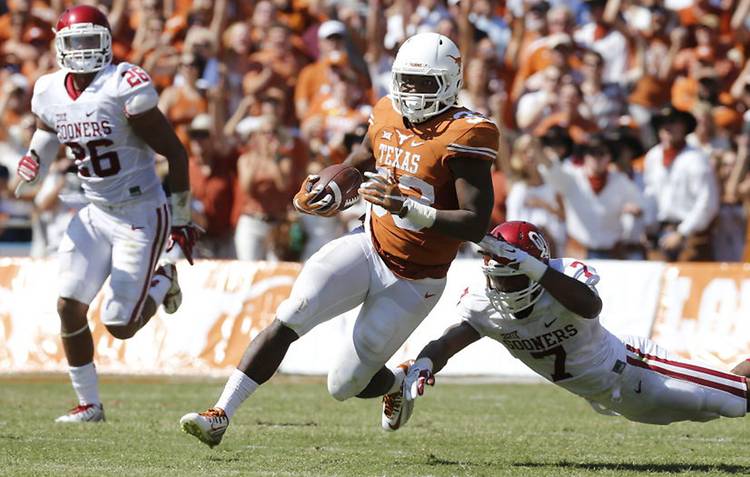 From unwanted to unstoppable, Texas running back D’Onta Foreman is going pro.

The former two-star recruit from Texas City, once considered an add-on benefit for schools that were recruiting his twin brother Armanti, turned himself into the nation’s leading rusher.

On Wednesday, Foreman announced he’s leaving the Longhorns after leading the country in rushing with 2,028 yards in only 11 games during his junior season.

“I had a wonderful season, and I feel like it’s time for me to pursue my dream,” Foreman said during a press conference at Bellmont Hall.

Asked where he wanted to land, Foreman said, “To be honest, anybody that wanna give me some money.”

It was only the second time in UT history that any Longhorn had more than 2,000 yards. Ricky Williams holds the school record with 2,124 yards during his Heisman Trophy winning campaign in 1998. Foreman also became the first 1,000-yard rusher at Texas since Jamaal Charles had 1,619 yards in 2007.

There was slight hope that Foreman would follow the path Williams laid in 1997. The talented junior shocked all Texas fans by announcing he was staying put for the head coaching transition from John Mackovic to Mack Brown. Williams won the Heisman that following season, and Brown’s program took off.

Foreman said he spoke with new coach Tom Herman about his decision on Monday. But it wouldn’t have mattered. Foreman said he would have left no matter what.

Players must capitalize on their talents when they can. The NFL Players Association has calculated the average player’s career lasts 3.3 years. And running backs’ careers last just 2 1/2 seasons on average.

“I’ll be a Longhorn for the rest of my life,” Foreman said.

Foreman is leaving Texas with one of the most impressive records on the books. He broke Earl Campbell’s 39-year-old mark with 13 consecutive 100-yard games, dating back to the 2015 season. Campbell had 11 such performances during his 1977 Heisman winning season.

Foreman had a school-record 51 carries for 250 yards against Kansas in a 24-21 overtime loss on Nov. 19. By the end, it was obvious he had little tread left on his tires.

“I didn’t feel like I had 50 carries during the game, so when they told me after the game I was like, ‘Wow,’” Foreman said three days later. “But if that’s what they ask me to do, then I’m going to do that.”

Foreman averaged 6.4 yards per carry during his career, which would be a new school record for runners with more than 500 carries. However, he fell 67 carries short of qualifying for that mark, so Ricky Williams’ 6.2 average is safe.

Still, Foreman probably wouldn’t have come close all these accomplishments this season had fellow running back Chris Warren III not suffered a knee injury against Oklahoma State. Going into the season, former coach Charlie Strong wanted to utilize Foreman and Warren, both 250-pound runners, as a combination.

Warren had 119 yards against California and 106 against Oklahoma State before getting hurt. Warren, a sophomore from Rockwall, already has 836 career yards and averages 6.3 yards per carry. He’s expected to return healthy in 2017 as a prime threat for Herman.

“I think he’s more than ready,” Warren said of Foreman. “He’s good. He knows what he’s going into.”

As the season wore on and Foreman kept piling up impressive numbers, he finally gathered some Heisman attention. It’s unclear whether he will reach New York as one of the Heisman finalists, though. Final ballots are due by 4 p.m. Monday.

“I definitely feel like I should be there, but it’s not up to me to decide,” Foreman said in mid-November. “It’s for everybody else to decide, so I’m just going to keep working hard and finish the season strong and see what happens.”

Heaven help any NFL general manager who doubts Foreman’s work ethic. He’s always carried a chip on his shoulder the size of Texas itself. “I should get a tattoo,” Foreman said.

Armanti Foreman was born first in April 1996, but D’Onta came rushing out 12 minutes later. The twins did everything together while growing up, and eventually became superstars in Texas City. College recruiters chased Armanti first because D’Onta still had to get his academic house in order.

Numerous times the last two seasons, D’Onta told the story how Brown and then-offensive coordinator Major Applewhite offered Armanti a scholarship, but not him. “So we leave, and I was hurt,” Foreman said. “Honestly, I was hurt.”

Other schools took a similar tact, prompting D’Onta to get busy with the books. Once he landed a better test score, the offers poured in. D’Onta and Armanti both chose to sign with Texas in 2014.

Foreman started his career behind Johnathan Gray and had to wait his turn. Then as a sophomore, Foreman electrified the UT side of the Cotton Bowl with an 81-yard sprint against Oklahoma. Armanti chased D’Onta down the field, and the two brothers had an emotional embrace that was caught on camera. The TV screenshot eventually became an Internet meme, and the brothers took that photo to an Austin tattoo shop and got the moment inked on their backs permanently.

“At the end of that quarter,  I’m watching them walking down the field and Armanti is hugging him, I see these two little boys walking off the field as Little Leaguers,” said Darreck Foreman, the twins’ father. “It brings tears to my eyes.”

The latest measuring stick for the Texas women? No. 3 Gamecocks, No. 2 Huskies