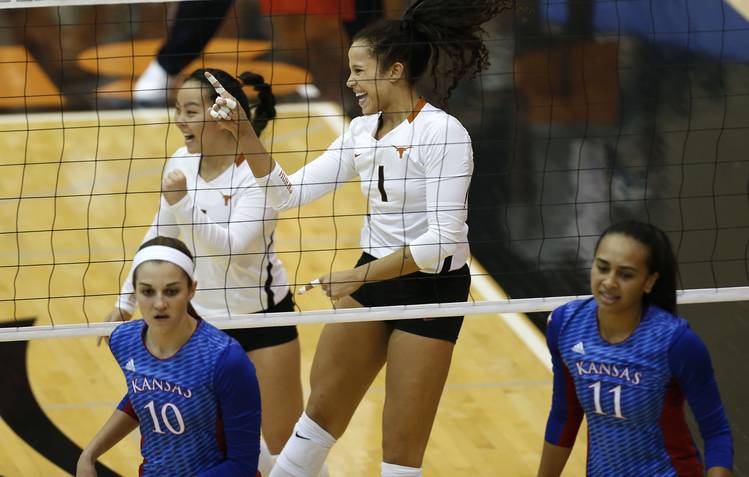 When it comes to nets, Micaya White would rather get a ball over one than in one.

White is the daughter of Randy White, the 1989 first-round pick of the Dallas Mavericks who played five seasons in the NBA, and she’s the sister of R.J. White, a senior men’s basketball player at UNC-Greensboro.

White, though, was never a fan of basketball. She disliked the running and contact associated with the sport, and jumped at the opportunity to quit once she got to high school.

No, White has made volleyball her branch on her athletic family tree.

“My mom swears she was the bomb.com in middle school, but I’m going to claim I was the first volleyball player,” White said.

A 6-foot-1 outside hitter, White and her Texas teammates open their annual trip to the NCAA Tournament on Friday. The Longhorns (22-4) face UT-Rio Grande Valley (21-13), and a victory would secure a next-day meeting with either SMU (25-7) or Texas A&M (21-8). The Longhorns, who were runners-up in the Big 12, have secured one of the four national No. 1 seeds for the NCAA tournament.

White leads Texas with 4.07 kills per set, and she is also contributing 1.98 digs per set and a .268 hitting percentage. She set a Big 12 record this season when she won eight of the conference’s 13 freshman of the week accolades. On Monday, she scooped up the Big 12’s freshman of the year award as well as first-team honors on the all-conference honor roll.

“She’s a six-rotation player for us,” senior setter Chloe Collins said. “I’m really proud of her; she’s done outstanding just on and off the court. I think she’s a physical threat for us, and that’s huge.”

White signed with Texas in 2015, but the Longhorns had to wait a year for her; she was sidelined by a painful tibial stress fracture in her leg. She ended up redshirting that season, as Texas reached the NCAA championship match.

The inactivity was something new for White, a three-time district MVP at Frisco Centennial. The psychology major, however, used the off year to gain an on-court education. During that year’s NCAA tournament — a time in which White was beginning to practice again — she also observed players she admired like Nebraska’s Kadie and Amber Rolfzen and the Tapp twins from Minnesota.

“I learned so much, and I honestly would redshirt again if I could go back,” White said. “I learned and I grew, and I got to watch some amazing players.”

White is one of six freshmen on Texas’ roster, although she has been on campus longer than her classmates. The five members of the 2016 recruiting class have also been heard from this fall.

Roommates Claire Hahn and Autumn Rounsaville are each contributing on the back line of a defense that has held 10 of its last 11 opponents under a .200 hitting percentage. Middle blockers Orie Agbaji and Blair Westerlund have also played. Those four have assisted La Grange’s Riley Fisbeck, who sits behind two senior setters on the depth chart, with carrying the team’s “good vibes tribe” mantra throughout the season.

Texas’ freshmen will now get to participate in “December Madness,” a phrase used on Sunday at the team’s watch party for the NCAA selection show by senior outside hitter Paulina Prieto Cerame. The Longhorns have reached the Final Four in seven of the last eight years, and won the national championship in 2012.

“I’m super excited. I don’t really know what to expect since it’s the first,” Hahn said. “I guess I expected to be more nervous than I am, but Jerritt (Elliott, the Texas head coach) has really prepared us well.”