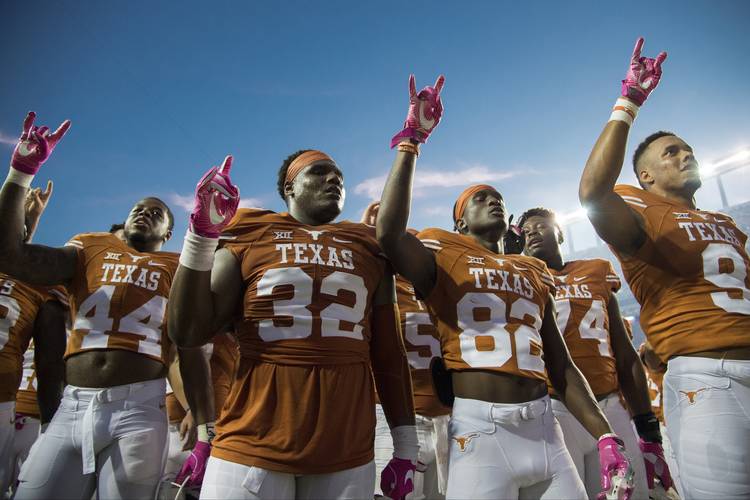 It’s understandable if Texas coach Tom Herman doesn’t yet know the backstory, parents’ names and skills of every scholarship player on the Longhorns’ roster. He’s held the job one week.

During his introductory press conference, Herman said, “No, I have not studied the roster.”

However, he wasted little time sending a message to the current players. Buckle up. This is the same coach who arrived at Houston, padlocked the locker room shut, took away UH-branded workout gear and told the players they had to earn it all back.

“I pulled some of the key players into my office here this week and told them, ‘Hey, I’m going to need a voice in that locker room, because things are going to get really hard,’” Herman said Thursday on 104.9 The Horn. “I mean, when I say hard, it’s unfathomably hard.”

Herman is inheriting a roster chock full of talent, but one that clearly needs better direction.

Thirty-seven players on the 44-man two-deep roster are projected to return in 2017. Make it 38 if running back Chris Warren III returns healthy, as expected.

If Herman puts any emphasis on finding a reliable kicker, he deserves a statue already.

“I think the guys are excited but still probably not quite sure what they’re getting into,” Herman said.

Here’s a look at the roster Herman inherits. It’s a group that Strong himself believed could win 10 games next season and compete for a national championship.

Watch out for: Sam Ehlinger

Buechele, a freshman this season, finished 42 yards shy of joining Chris Simms, Major Applewhite, Vince Young and Colt McCoy as the only 3,000-yard passers in UT history. That’s quite a group. And Buechele really didn’t play that well down the stretch. His three interceptions doomed UT at Kansas, and Buechele was mediocre against TCU.

Ehlinger is expected to enroll later this month so he can participate in spring drills. He’s suffered multiple injuries as a senior at Westlake, including a wrist injury that kept him out of Friday’s playoff game against Lake Travis.

Normally, you’d give the edge to the returning veteran and not think twice. But Buechele and Ehlinger will be starting from scratch with a new coaching staff. May the best passer win.

Watch out for: Kirk Johnson

In the first four games, D’Onta Foreman showed he could get loose in tight spaces with some side-to-side wiggle. Warren was a straight-ahead bruiser and couldn’t really create something out of nothing. Still, Warren was averaging 91 yards per game before suffering a knee injury at Oklahoma State.

The question must be asked: Does a 250-pound running back truly fit Herman’s offensive style? Houston had no athlete like that this season. Duke Catalon, who ironically transferred to Houston from Texas, weighed 210 pounds.

Herman probably kept close tabs on Porter’s performance at Katy, the 2015 Class 6A Division II state champion. Porter ran for 205 yards as a third-stringer this season at UT. There’s always been high hopes for Kirk Johnson and Tristan Houston. Could Herman bring their potential to the forefront? There were rumblings that Houston wanted to transfer. Why not see what the new coach has to offer first?

Overall, this could be the most dangerous group of receivers in college football. They also drop some critical balls at the most inopportune times.

Duvernay finished the season with a team-high 20.6 yards per catch, but he was still underutilized considering his skill set. Johnson had two impressive touchdown catches against Texas Tech running the same route in opposite directions but only three scores all season.

There was talk that Humphrey could run the 18-Wheeler package next season in place of Tyrone Swoopes. But now that offensive coordinator Sterlin Gilbert is gone, that package is likely gone, too. Hemphill-Mapps cooled his jets as a redshirt.

The Longhorns are losing right guard Kent Perkins, but there’s plenty to work with. Williams, who will likely earn more All-America nods in the coming weeks, will be back for his junior season. Texas hasn’t had an offensive lineman drafted since 2008.

Vahe got crossways with the previous staff for speaking his mind. Those coaches responded by putting a former freshman All-American on the bench. Shackelford was held together with duct tape and glue by the end, and McMillon should’ve gotten more praise for his play as a backup.

For the juniors and seniors next season, Derek Warehime will be the third offensive line coach they’ve had at Texas.

Hager and Roach emerged as major disrupters early this season, and the two combined for nine sacks. They played in Strong’s hybrid “Fox” position, which was part defensive end and part linebacker. Could they be as effective playing in either of those traditional roles?

Strong probably cringed at Hager’s honesty with reporters, something that got him banned from doing interviews in November. Herman might love it.

Nelson and Ford clogged up the middle, combining for 11.5 tackles for loss. Hopefully for the Horns, Christmas and Wilbon spent the year learning from senior Paul Boyette Jr. how to play with tenacity and grit as a true team leader.

Jefferson was labeled the face of the program last summer, and that may have been too much pressure to bear. Jefferson didn’t play like his normal self at times this season. Eventually, he got benched against Kansas State and needed a family intervention to snap out of his funk.

Freeman quietly had a solid season, getting three sacks, two interceptions and nine tackles for loss. McCulloch played in 11 games but played like a freshman at times and got ejected late against Kansas for targeting.

This group has speed and some play-making potential. Boyd and Fowler boost the options. But not many epic game-changing moments come to mind from this past season.

Watch out for: Eric Cuffee.

Davis and Hill lost their confidence and eventually their starting jobs, too. Two of Strong’s best defenders in 2015 simply vanished one year later. Boyd and Bonney finished the season as the starting corners, and they certainly played well.

Elliott and Jones are the future at safety, and it’ll be curious to see if the win starting jobs this spring. Locke found his niche as a nickel corner. In the Big 12, that practically makes him a 12 starter considering how many teams use spread offenses.

Once Strong took over the defensive play-calling duties, the defense actually got better. The unit gave up 15 passing touchdown in the first six games, only seven in the last six.

Watch out for: Anyone who can kick field goals.

Dickson still could win the Ray Guy Award as the nation’s best punter, but he’ll have to sneak past Utah’s Mitch Wishnowsky to do it. Dickson averaged 47.4 yards per boot in one of the best seasons of any UT punter in years.

However, the kicking situation was horrendous under Strong. Trent Domingue fell into UT’s lap as a graduate transfer, but now he’s gone. Blocked kicks against California and Notre Dame were just the appetizer to Oklahoma State, which blocked three extra points.

The return game was nothing to brag about, either. Game after game, UT’s kick returners would field balls in the end zone only to return them short of the 25-yard line. On punt returns, Strong wanted Jacorey Warrick to simply catch the ball and not worry about any return.

Jeff Traylor was listed as UT’s special teams coach, but that was in name only. There was scant attention paid to special teams, and that stems from the head coach. Herman should make this one of his top priorities in 2017.

Yaazie Bedart-Ghani leads Texas to a sweep in NCAA opener