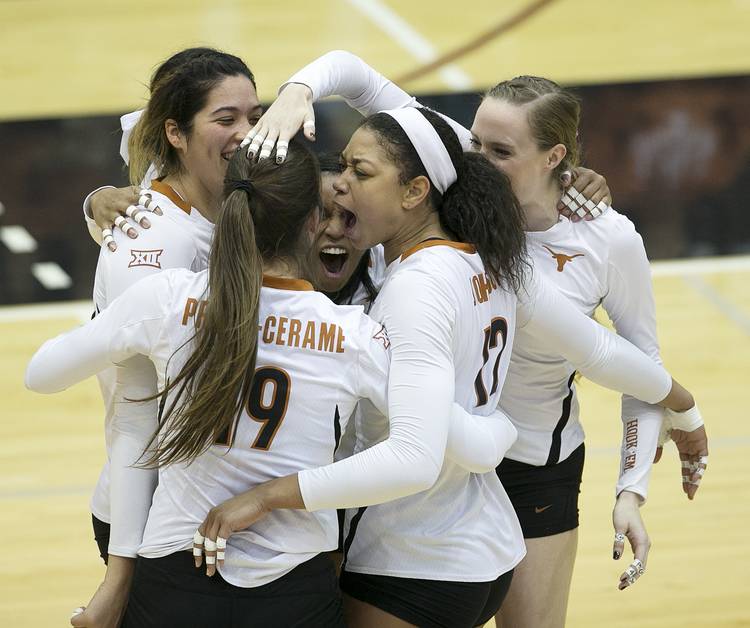 Texas players react to a point against University of Texas Rio Grande Valley during the first-round NCAA volleyball tournament on Friday, December 2, 2016. Texas beat UTRGV to advance in the tournament. DEBORAH CANNON / AMERICAN-STATESMAN

It is tournament time for Texas.

Sophomore Yaazie Bedart-Ghani and senior Paulina Prieto Cerame recorded double-digit kills, and Texas started its December with a 25-14, 25-16, 25-17 sweep of UT-Rio Grande Valley. The weekend-opening win gave Texas a victory in its 13th consecutive trip to the NCAA Tournament. The Longhorns also improved to 33-0 in their all-time tournament openers.

“I thought we were just really steady the entire match,” senior setter Chloe Collins said. “We maintained our composure the entire time, and the momentum, we kept it. I just felt that we played really well tonight.”

In addition to being a clash between the No. 1 and 16 seeds in their bracket, Friday’s mismatch was also a testament to experience. Texas has reached the Final Four in seven of the last eight years, while UTRGV was making its first appearance at the NCAA Tournament. In its debut, UTRGV was schooled by the veteran Longhorns.

Texas trailed once over the first two games — a 1-0 hole in the second set — as the team’s .310 hitting percentage was boosted by Bedart-Ghani, a 6-foot-4 middle blocker who was a nearly-flawless 8-for-9 on her kill attempts. Bedart-Ghani then connected on each of her five attacks in the third set, the last of which secured the sweep.

A NCAA all-tournament honoree as an outside hitter in 2015, Bedart-Ghani was moved to the middle in early October. Bedart-Ghani said the position change had gone “a lot smoother than I anticipated,” and she led Texas in kills for a second straight match. (Bedart-Ghani was 10-for-12 on her attempts against West Virginia on Nov. 26).

“(Collins and I) were just connecting really well,” Bedart-Ghani said. “We got into a nice grove.”

Prieto Cerame added 10 kills for Texas, and Collins had 36 assists. The two seniors will graduate at noon on Saturday. Collins is majoring in corporate communication, while Prieto Cerame has earned a degree in youth and community studies and a minor in human development.

Collins said Saturday would be “hectic,” but added the Texas coaches had put together a workable schedule that included a walk-though at 3 p.m. and the match against SMU at 7 p.m. Texas coach Jerritt Elliott joked he was more stressed than the players since he had to be at two different ceremonies.

On the other side of the net, UTRGV was limited to a .114 hitting percentage. Ragni Steen Knudsen and Bojana Mitrovic combined for 15 kills to lead UTRGV (21-14).

“It took a lot for us to come together and stay disciplined and focused and not ride with the emotions that they were giving,” said UTRGV senior Alisha Watson, who graduated from nearly Round Rock High. “They’re a pretty solid team, there’s no doubt about that.”

The Longhorns moved into a Saturday showdown with SMU, which prevented a Texas/Texas A&M reunion with a sweep of the Aggies on Friday.  Anchored by its ball-handling and a defense led by three-time American Athletic Conference libero of the year Morgan Heise, SMU is making only its second appearance in the NCAA Tournament.

“They’re going to have a huge fan base and we’re going to have a huge fan base, so I think it’s going to be really fun,”  SMU middle blocker Kristen Stehling said. “They’re obviously a great team, just like A&M was a great team. Since we don’t have as big of schools in our conference, I think it’s really fun for us to get to this tournament and get to be able to play teams like this.”

Roster 101: Tom Herman is inheriting a veteran Texas team in 2017