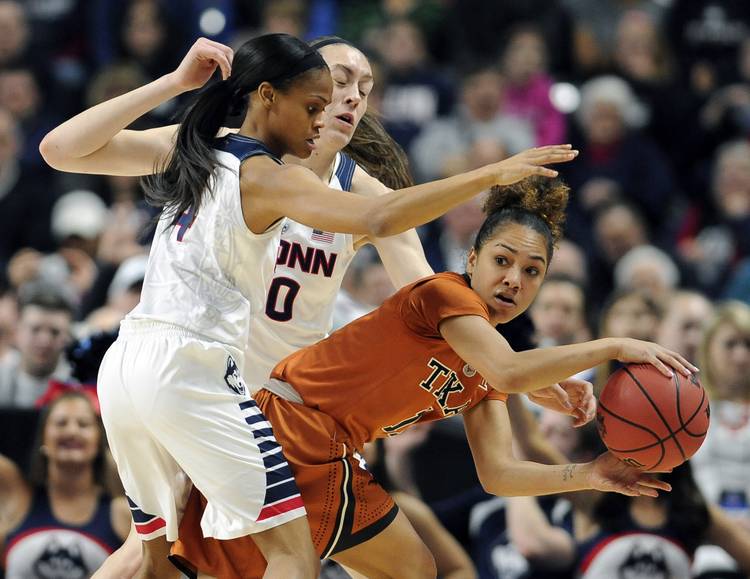 Connecticuts Breanna Stewart, rear, and Moriah Jefferson, left, defend against Texas Brooke McCarty during the first half of an NCAA college basketball game in the regional final of the women's NCAA Tournament, Monday, March 28, 2016, in Bridgeport, Conn. (AP Photo/Jessica Hill)

Karen Aston compares her team’s brutal early schedule to what the Longhorns will see in the NCAA Tournament.

Texas, ranked No. 14 in the country, has absorbed losses to No. 3 South Carolina, No. 10 Mississippi State and No. 11 Stanford. Now the Longhorns (2-3) face their toughest challenge so far when they tangle with defending national champion UConn on Sunday in Uncasville, Conn.

This is the first time Texas has lost three of its first five games to start a season since 1998. After Thursday night’s 76-67 loss to the Gamecocks at the Erwin Center, Aston said no one wearing burnt orange is having any fun.

Yet the goal of having a successful NCAA run in March is still on the table.

“We’re going to go to the tournament and we’re going to have situations where you have to turn around really quickly and play a quality opponent back to back,” Aston said. “So we have to look at it in that manner. This is a going to be a great learning tool to be able to use somewhere down the road in tournament play.”

Second-ranked UConn (6-0) presents another challenge despite having its top three players taken with the first three picks of this past spring’s WNBA draft. The Huskies, who are 7-0 all-time vs. Texas, have reloaded with a new crew of outstanding players.

UConn has ended UT’s season the past two years in the NCAA Tournament. Last season the Huskies prevailed in an Elite Eight matchup, 86-65.

On Thursday night, while Texas was losing to South Carolina, UConn destroyed No. 15 DePaul 91-46 behind a career-high 33 points by junior guard Kia Nurse. Despite the easy victory, coach Geno Auriemma was not pleased by his team’s overall performance.

“We played 20 minutes of good basketball in the first and third quarters, the other two quarters nothing good,” Auriemma said after the game. “We played 20 good minutes against a quality team, but is 20 good minutes going to be enough to be Texas, Notre Dame, Ohio State, and Maryland, I don’t think so.”

As for Texas, which went 31-5 last season, losing to quality teams is wearing on players. Guard Ariel Atkins was unaccustomed to losing at Duncanville High, whose teams were a combined 148-10 during her four years on varsity, including a winning streak that spanned 105 games.

“It is really hard,” Atkins said Thursday night. “Nobody likes to lose. Personally, I really hate it. But it’s the game of basketball. But like Coach said, I would be discouraged if we weren’t getting better. I think we took a big jump this week in our preparation and actually listening to the coaching and doing what they want us to do so I’m not discouraged.”

Among the bright spots for Texas was noticeable improvement from senior center Kelsey Lang, who led the Horns with 15 points and 12 rebounds.