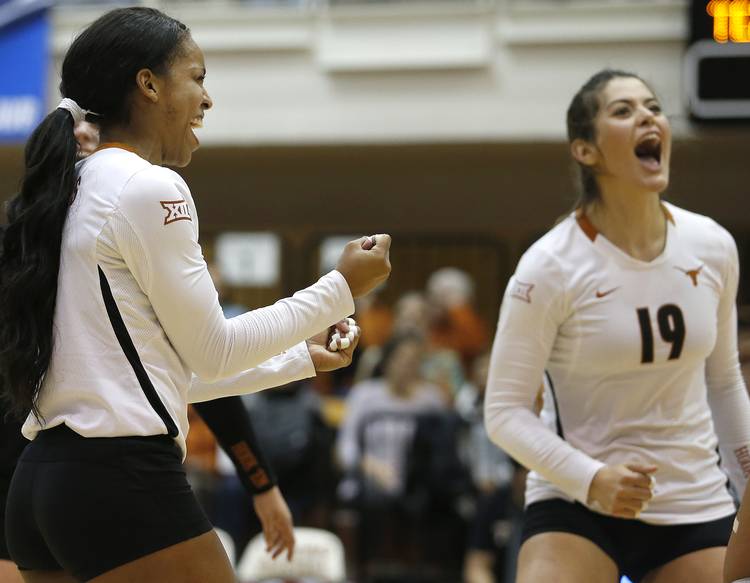 That home-field advantage should come in handy in the near future since Saturday’s victory ensured that third- and fourth-round matches will be played on the Texas campus next week. The Longhorns (24-4) will meet BYU (29-3) in the Sweet 16, while Michigan (24-10) battles Creighton (28-6). The winners of those two matches will then compete for a trip to the Final Four, which is set to be held in Columbus, Ohio from Dec. 15-17.

“It’s a blessing to get to the Sweet 16, it’s not as easy as everyone thinks,” Texas libero Cat McCoy said. “We’re really lucky to be hosting it and having our fan support because that’s huge for us.”

The sweep capped a memorable weekend for Collins and Prieto Cerame, who both participated in noontime graduation ceremonies on Saturday. (Nicole Dalton, the third senior on Texas’ roster, has already graduated). Collins majored in corporate communication during her time at Texas. Prieto Cerame, who transferred to Texas from Penn State in 2014, picked up a degree in youth and community studies and a minor in human development.

Following their ceremonies, the graduates scooted over to training and warm-ups. Then came a match in which Prieto Cerame registered 14 kills on a .312 hitting percentage while Collins had 45 assists and 10 digs. The 5-foot-7 Collins also recorded three kills.

Were Collins or Prieto Cerame concerned with their busy schedules on Saturday?

“I think my whole focus was don’t be in my heels too long,” Collins said. “Other than that, no. Jerritt (Elliott, the Texas head coach) did a really great job just planning it out for us so we’re not stressed. We were just able to come in and focus on the match.”

In addition to Prieto Cerame, Texas also rolled behind 15 kills from junior Ebony Nwanebu and freshman Micaya White’s 13 kills. The three outside hitters, each of which earned first-team honors on the Big 12’s all-conference team, all hit better than .300 on Saturday night.

SMU, on the other hand, struggled against a Texas defense that uses 6-foot-4 Yaazie Bedart-Ghani and 6-foot-3 Morgan Johnson as its middle blockers. The 6-foot-4 Nwanebu and 6-foot-2 Prieto Cerame also contributed to Texas’ eight team blocks, and McCoy led all players with her 18 digs.

“They knew what we were going to bring at them,” said junior Katie Hegarty, who led SMU with 11 kills. “We were doing shots and doing some different things, but it was something that we hadn’t seen before. They were very big, and we respected that.”

Collins said she enjoyed seeing the smiles of family members on Saturday, and the Cypress native added that “I’m just so happy that I graduated.” Prieto Cerame, who grew up in Puerto Rico and attended high school in Miami, did not have her family in town, but Elliott and members of the volleyball team filled in.

Hours later, Texas moved onto the NCAA tournament’s third round for the 11th years in a row.