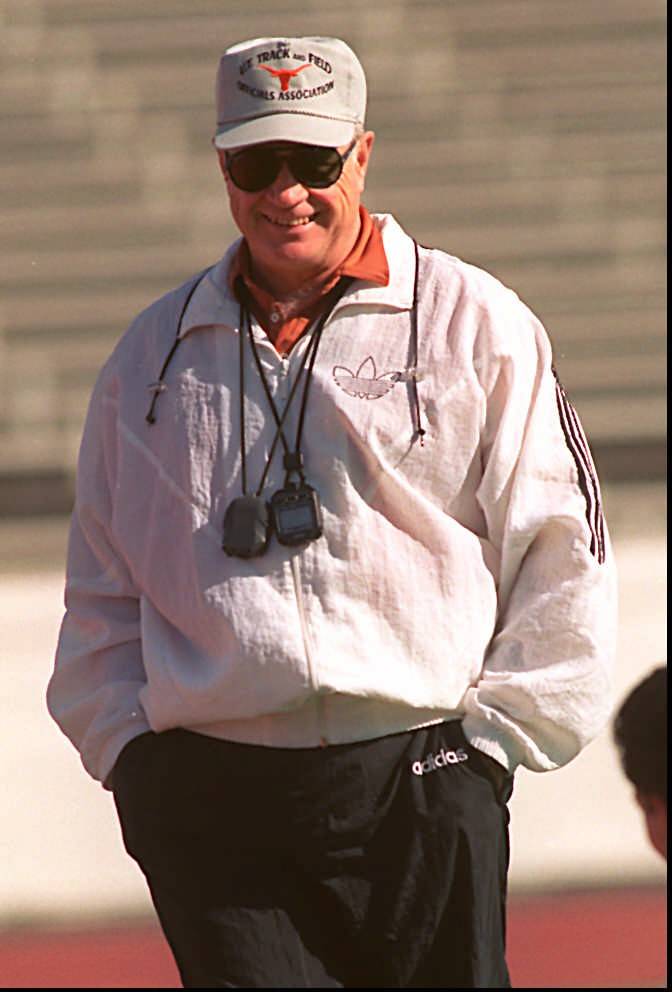 On an otherwise dreary Saturday, hundreds of friends, family members and former athletes gathered at St. Theresa Catholic Church in Northwest Austin to celebrate the life and legacy of Stan Huntsman, a former University of Texas track and field coach for whom the sport was a lifelong passion.

Huntsman, 84, died Nov. 23 of complications from a stroke he suffered two years ago, according his wife of 52 years, Sylvia. He is also survived by son Stanley Stephen of Los Angeles; daughter Coni Huntsman Stogner of Austin; her husband Bradley Stogner; and the Stogners’ children, Connor, Mackenzie and Quentin.

Huntsman spent 39 years as a college head coach and was the head coach for the U.S. men’s track and field team in the 1988 Seoul Olympics. Six times during his career he was chosen as the NCAA’s coach of the year.

“He was the best of the best and a gentleman,” former UT men’s athletic director DeLoss Dodds said Friday. “For years, he and Sylvia were the face of track and field in the NCAA.”

Huntsman headed track programs at Ohio (1956-71) and Tennessee (1971-85) before he was tabbed by Dodds to take over the men’s program at Texas in 1985. He promptly revived a flagging rivalry with a powerhouse Arkansas program, winning six Southwest Conference outdoor titles, and twice finished runner-up in the NCAA Championships in his 10-year run at UT.

“I had the advantage of having been a track coach,” said Dodds, who coached at Kansas State before switching to the administrative side. “I didn’t know a track coach in the nation who was better than Stan Huntsman, and I knew them all.”

Back when Dodds hired Huntsman, UT women’s coach Terry Crawford was excited to hear the news. She’d been plucked by Texas the previous year and had been the women’s coach at Tennessee.

“As a young coach, he was my role model. I shadowed him,” said Crawford, now the director of coaching for U.S. Track and Field.

“He was a great competitor. He wanted to win, and he knew how to win,” Crawford said Friday. “He was a master at identifying and developing talent.”

Huntsman valued walk-ons more than most coaches. In football, they often are little more than tackling dummies. But Huntsman understood that they might provide a few crucial points in a conference track meet, could be of value in recruiting five or 10 years down the road, and perhaps would blossom into much more.

“He could always see the big picture,” Sylvia Huntsman said.

Crawford said she used to joke with Huntsman, “I’m waiting for the next Harry Green to walk into my office.”

Green was less than a blue-chip miler and two-miler at Memorial High School in Houston. Practice? He might show up. A meet tomorrow? No reason not to go out that night.

“I was under-trained and somewhat irresponsible,” said Green, now a graphic artist and web designer in Pennsylvania.

Green walked on at Texas and vowed to Huntsman to get more serious about running.

“It was like a perfect storm,” said Green, who became a seven-time All-American and a team captain at UT. When he was done competing in 1989, he held six school records.

“Anyone who was really committed and had some talent was welcome to train with the team,” Green said Friday. Like many athletes, he continued to talk with Huntsman long after he was done competing.

Huntsman could also work with talented athletes, and among the best he coached was Jamaican hurdler Winthrop Graham.

Graham spent his freshman season at Central Arizona, and when he let it be known he was leaving, he was recruited by other schools. He said Huntsman was the only coach who talked with him about getting an education and graduating rather than focusing strictly on athletics.

Not that Huntsman was one to de-emphasize training. Graham remembers a rare day when it was really wintry in Austin.

He made his way to the intramural fields to see if practice was still on.

“Stan was there standing in the middle of the snow waiting for me,” Graham recalled Friday.

He said that as a Jamaican he had no family in Austin but would often stop by the Huntsmans’ house on the holidays.

Graham said Huntsman continued to work with him even when the two became rivals in 1988. Graham made the Jamaican Olympic team, and Huntsman was appointed the head coach for the U.S. men’s team. Crawford was named the women’s coach, the first time one school held both prestigious positions.

“That’s a feat that has never been repeated in track and field,” Crawford said.

Back then, Huntsman explained to the Alcalde, UT’s alumni magazine, something of his love for track and field.

“You measure yourself against the best in the world, and there’s very little cheating,” he said.

Uhhhh, in 1988, not so much. At the Olympics in Seoul, athletes were running faster, jumping higher and looking a lot stronger — and people were wondering why.

“We were definitely battling the East German machine,” Crawford recalled.

At the pool, the U.S. female swimmers under UT coach Richard Quick were getting dunked by the East Germans, and on the track, Canada’s Ben Johnson was shocking Carl Lewis in the 100 meters, before Johnson’s victory was overturned because he failed a drug test. Lewis picked up that gold, one of the world-leading seven gold medals Huntsman’s team won. Another U.S. gold came in the 1,600-meter relay, where Graham got a silver running for the Jamaican squad.

But though men’s track was highlighted at the Olympics, it faced continuing problems on the home front. In 1991, the NCAA limited men’s track scholarships to 12.6, continuing a trend of shrinking emphasis on the sport, which is not a money-maker for colleges.

Huntsman argued that college sports should be about more than money.

“He was a purist,” Sylvia Huntsman said.

“He wanted to have a track team, not a relay team or a distance team. He didn’t want to have 10 guys,” Dodds said.

On Saturday, many more than that turned out to honor the coaching legend.

Pomp and circumstance: Texas advances to Sweet 16 after seniors graduate