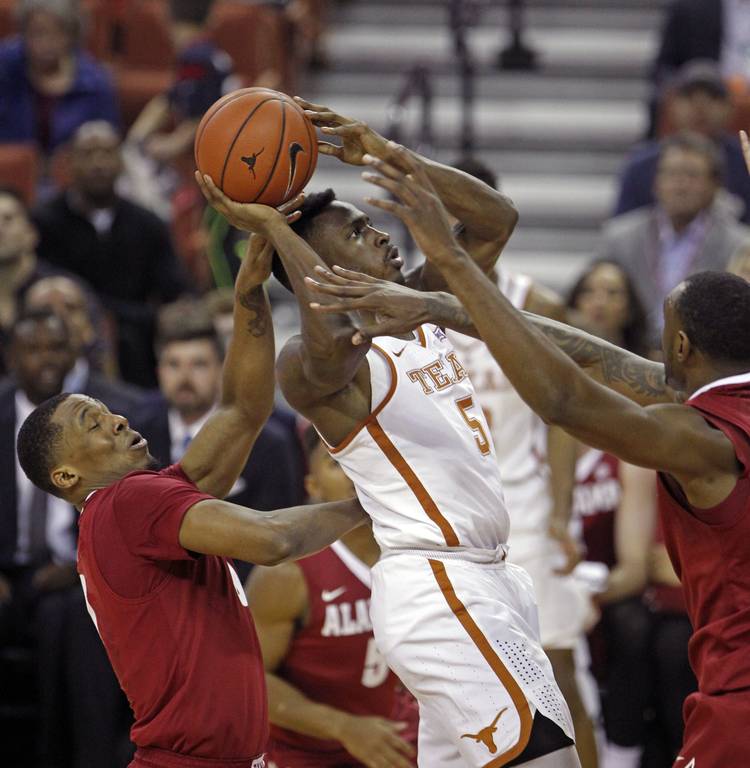 The day after an embarrassing loss to UT-Arlington, the Texas coaching staff spent an hour and 15 minutes showing the Longhorns clips of offensive and defensive plays labeled “NGE.”

“When we had that film session the next day,” Texas coach Shaka Smart said, “I think there was a real agreement among the guys that we have to be better.”

Wednesday and Thursday produced “elite, high level” practices, according to senior Shaq Cleare. And Friday, when faced with a 12-point deficit against Alabama, something finally clicked.

In their seventh game of the season, the Longhorns turned in 20 minutes of stunning basketball that led to a 77-68 come-from-behind win over the Crimson Tide. After halftime, Texas scored 51 points, shot 56.7 percent and forced eight turnovers in what felt like a season-turning moment at the Erwin Center.

“This is the thing, man,” Smart said. “If we can ever put this in a bottle, we’ll really have something.”

Fans were on their feet the last four minutes, cheering and shouting as if this was a mega-matchup of two conference rivals. Alabama (4-3) was picked to finish in the middle of the SEC.

“Give them credit,” Alabama coach Avery Johnson said of Texas, also 4-3. “This is a team that lost three games in a row and they were desperate.”

Was it a must-win situation in early December? Sophomore Tevin Mack, weary after a career-high 37 minutes, sure seemed to think so.

“I think desperate is a little bit of a stretch,” Mack said, “but we were definitely hungry for a win.”

This wasn’t the result of a handful of plays, although Jacob Young’s 3-pointer with 3:38 remaining was a big one. This was the result of two intense days of hard work and introspection after Tuesday’s 72-61 loss to UTA.

Asked who took ownership and showed leadership, Smart didn’t hesitate. It was Cleare, the 6-foot-8 senior.

Cleare spent two days forgetting about his personal stats and focusing on his teammates, the coach said. That karma was returned two-fold against the Tide as Cleare had 11 points and got multiple baby hooks to fall true.

Five players finished in double figures, with Kerwin Roach Jr. leading the way. He was 12 for 16 from the foul line and had 16 points. All nine players contributed in some form, such as Andrew Jones’ lone 3-pointer or Jarrett Allen’s two free throws late.

Mack’s 3-pointer with 9:15 remaining got Texas within one. Cleare’s short jumper gave the Horns a 58-57 lead. Eric Davis Jr., who went 0 for 8 against UTA, ended his personal drought with a breakaway giving UT a three-point edge.

Make no mistake, the Tide made things harder on themselves by missing 13 shots after halftime. “Boy, we missed some really great looks,” Johnson said. “We didn’t have anybody between here and Dallas or San Antonio.”

The Longhorns were the ones converting, getting 15 points off turnovers and 12 more off second chances. Instead of sitting on the wings, they attacked, making 14 of 23 two-point shots after halftime.

There shouldn’t be many NGEs after this one.

“It’s hard to play with a level of fight when you’re feeling sorry for yourself or you get down,” Smart said. “I think we made some progress in that area tonight. Now, are we willing to look at what went into this game and keep doing those things better?”

Yaazie Bedart-Ghani leads Texas to a sweep in NCAA opener

The latest litmus test for the Texas women? Mighty UConn, that’s all