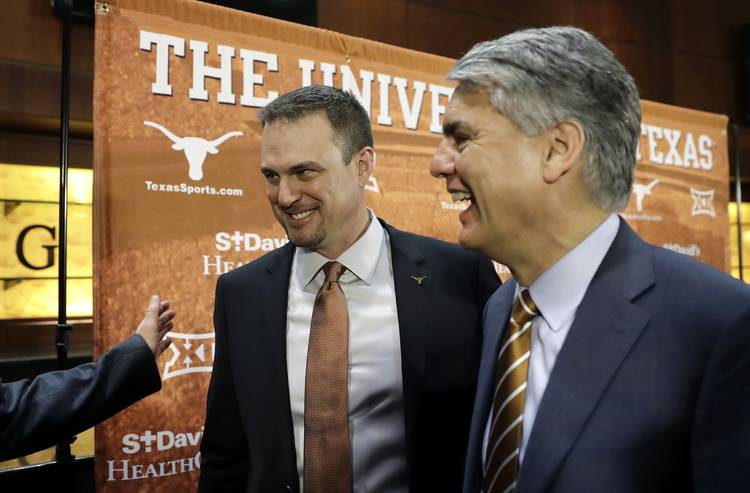 Texas is betting Tom Herman is worth at least $25 million and hopefully much more.

The UT System Board of Regents approved a five-year contract for the Longhorns’ new football coach in a rare Saturday afternoon meeting.

The overall structure of the deal is similar to what former coach Charlie Strong received, but Herman will start with a slightly higher base salary.

“Well, we’ve got a great coach,” Fenves said. “Once we make the decision, I like to get things done.

Strong was 16-21 over the past three seasons. He had the lowest winning percentage (.432) of any coach in Texas football history. Herman is 22-4 in his only two seasons as a head coach, both at Houston.

The contract includes more built-in features to protect the university. For the first time in UT history, the head football coach’s contract has a buyout provision — and it’s a hefty one. Should Herman leave UT, he would owe the school $3 million for every year remaining on his deal plus the total compensation due to his assistants.

Herman already owes Houston officials $2.5 million for leaving town, according to the terms of his contract there. Fenves confirmed that UT officials are in discussions with Houston about that buyout.

There is also a retention bonus on Herman’s UT deal. Herman will receive $1 million if he’s still at Texas on Dec. 25, 2019.

Regent Alex Cranberg said he believed this contract was more “performance driven” than what Strong received. Strong is still owed at least $10.4 million for the final two years of his guaranteed contract.

“The guarantee structure of the past contract associated with previous administrations are, in my opinion, absolutely disastrous and frankly embarrassing to me as somebody who did in fact vote for them,” Cranberg said.

Herman’s contract includes various performance bonuses that could capture an extra $575,000 annually should he hit them all. For example, Herman would receive an additional $100,000 if Texas plays in the Big 12 championship game, which will return in 2017. He’d get another $250,000 if Texas wins the College Football Playoff championship.

“That seems to be the standard of what’s trending in the market, and we need to be competitive,” he said.

Perrin said he was pleased to have regents’ approval and now the athletic department can move forward.

Read full details of the contract below:

The latest litmus test for the Texas women? Mighty UConn, that’s all