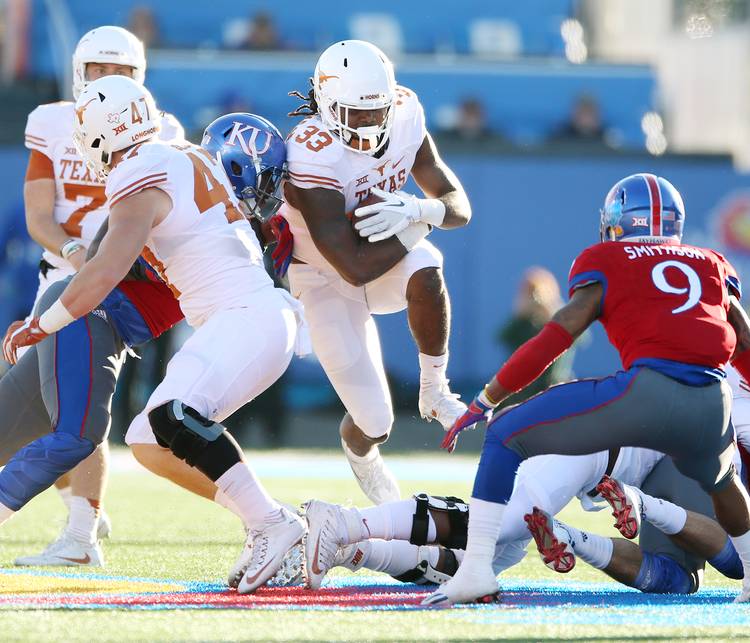 Texas's #33 D'Onta Foreman during the first half in Lawrence, Kansas on Saturday, November 19, 2016. DEBORAH CANNON / AMERICAN-STATESMAN

Texas junior running back D’Onta Foreman has earned the statistics but not the votes.

Foreman was omitted from the list of finalists for the Heisman Trophy on Monday. The Texas City product’s standing among the Heisman Trophy voters won’t be revealed until this weekend, but he did not garner enough support to earn a trip to New York City for the award ceremony. Foreman was attempting to become Texas’ third Heisman Trophy winner, joining Earl Campbell (1977) and Ricky Williams (1998).

Louisville quarterback Lamar Jackson, Michigan linebacker Jabrill Peppers, Clemson quarterback Deshaun Watson and Oklahoma’s quarterback-receiver combination of Baker Mayfield and Dede Westbrook will head to New York as the finalists for the Heisman Trophy, which is annually given to the best player in college football. The winner is set to be announced on Saturday evening.

Foreman became the second 2,000-yard rusher in Texas’ 124-year history this fall, and his 2,028 yards trailed only the 2,124 yards accumulated by Williams in 1998. He scored 15 times and became a workhorse after Chris Warren III sustained a knee injury against Oklahoma State on Oct. 1. Foreman ran at least 30 times in six of the eight games following Warren’s injury, and he logged a school-record 51 carries in an overtime loss at Kansas.

Foreman is also a finalist for the Doak Walker Award, which is awarded to the nation’s top running back.

San Diego State senior Donnel Pumphrey needs only 11 yards in the Las Vegas Bowl on Dec. 17 to take the FBS rushing title away from Foreman. (Pumphrey is also 108 rushing yards shy of becoming college football’s career champion). Pumphrey, though, has already played in two more games this season than Foreman, who leads the country with his 184.4 yards per game.

Foreman’s statistics not only put him at the head of the class in 2016 — UTEP junior Aaron Jones’s 1,773 yards rank third among the 128 FBS rosters — but they were comparable to the previous five running backs that won the Heisman Trophy. Of the five trophy-winning running backs since 1995, only Williams rushed for more yards before the ballots were cast.

How do D'Onta Foreman's stats stack up against the last five running backs who won the Heisman Trophy?

Foreman certainly had the statistics to get to New York, but it appeared the biggest hang-up was Texas’ record. The Longhorns slumped to 5-7 in 2016, and an injury actually sidelined Foreman for Texas’ 41-7 win over UTEP.

In its history, the Heisman Trophy has only been given to one player on a team with a losing record (Notre Dame’s Paul Hornung in 1956). Oklahoma fullback back Steve Owens is the last winner to play for a team that had four losses before its bowl game, and he beat out Purdue quarterback Mike Phipps for the award in 1969.

Foreman had costly fumbles in close losses to Oklahoma and Kansas, but he was hardly a contestant in the blame game for Texas. He averaged 167.1 yards per game in those seven defeats, and Texas received two touchdowns from Foreman in its setbacks against California, Oklahoma State, Oklahoma and Kansas.

“I think our win-loss ratio doesn’t accurately show who we are and who we are as a team,” offensive lineman Connor Williams said last month. “As a running back, he’s done everything you could ask for a running back to do.”

Using the “HEISFOREMAN” hashtag, Texas mounted an online campaign for its first Heisman Trophy candidate since Colt McCoy in 2009. Foreman also didn’t shy away from self-promotion. Several times this year, Foreman said he believed he had done enough to earn a trip to New York City.

“I definitely feel like I should be in New York,” Foreman said last week. “We didn’t put up the wins like we should have, but I was consistently productive for my team. I did everything I could to help us win. I know it goes into how many games you’ve won, but I feel like it’s supposed to be the best player and I feel like I’m one of those players.”

Foreman has announced that will forgo his senior year at Texas and enter the NFL Draft. Instead of becoming Texas’ third winner of the Heisman Trophy, he must now focus on becoming only the sixth Longhorn running back taken in the NFL Draft since 1991.

And although his efforts were overlooked by Heisman Trophy voters, they will not be forgotten by the Texas record books.

In addition to his 51-carry outing, Foreman set another school record in that Kansas game when he recorded his 12th straight 100-yard rushing performance. (He extended that streak to 13 games in Texas’ season finale). A 341-yard against Texas Tech was only nine yards off Williams’ school standard, and he became Texas’ first 1,000-yard rusher since 2007.

Foreman, who ran for 754 yards over his freshman and sophomore seasons, exits Texas as the 40 Acres’ eighth-leading rushing of all-time.