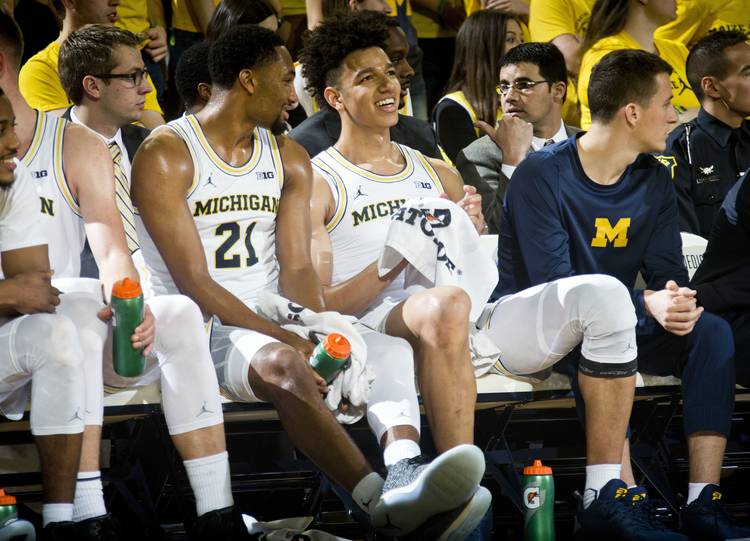 Michigan guard Zak Irvin (21) and Michigan forward D.J. Wilson, center, share a laugh next to each other on the bench in the second half of an NCAA college basketball game against Kennesaw State at Crisler Center in Ann Arbor, Mich., Saturday, Dec. 3, 2016. Michigan won 82-55. (AP Photo/Tony Ding)

There’s no reason to dredge up old memories of recent Texas-Michigan basketball games. Practically everyone is gone.

Isaiah Taylor and his crew watched Michigan drill 14 3-pointers over their heads in a 2014 NCAA Tournament game. “The three is not what beat us tonight,” then-coach Rick Barnes said stoically after the 79-65 loss. Um, yes it was, coach.

Taylor and the Longhorns gave it another go against the Wolverines last season in the Bahamas, but lost 78-72.

“I’ve been watching our Michigan game from last year,” current UT coach Shaka Smart said. He noticed nary a starter is back. “I was texting with Javan (Felix) and said, ‘Man, wish we had another year with you guys.’”

On Tuesday, Smart will take his predominately young team to Ann Arbor to face a decidedly older one dressed in maize and blue. It’s the toughest opponent on the non-conference schedule, and frankly, it’s an early December gut-check for the Longhorns (4-3).

Michigan (6-2) is shooting almost 45 percent overall and 35 percent from 3-point range. The Wolverines make their free throws, usually win the battle on the boards and force nearly 13 turnovers per game.

If Texas comes out with the same modicum of effort it showed against UT-Arlington, it’ll be a long, cold night at the Crisler Center. However, if the Longhorns play with the same grit and tenacity they showed in the second half Friday night against Alabama, it could be a huge road win.

This isn’t a matchup about talent, per se. It’s about want-to.

“Coach always talks about responding, and I finally feel like we took on what he was saying and executed what he wanted us to do,” sophomore Tevin Mack said after Friday’s come-from-behind win, when Texas trailed by 12 at halftime and wound up winning by nine.

Said senior center Shaq Cleare, “This was a glimpse of what we could really be like. We’ve just got to keep working hard going forward.”

Will the Longhorns fall behind early and have to battle out of a trench? Will they come out full guns blazing?

“The observer in me is really excited to see how our guys respond as a team and individually to that,” Smart said.

The Horns have shown flashes of intense desire at times, like when Allen dove on the floor for a critical loose ball against Incarnate Word. Or, like when Kerwin Roach Jr. was aggressive enough to get rewarded with 16 free throws against Alabama.

Other moments are just head-scratchers. Kendal Yancy scored only eight points combined in the last three games. Allen, Cleare and Banks combined for only seven rebounds against the Crimson Tide.

“The best teams play hard, they play smart and they think ‘team,’” Smart said. “You put ‘play hard’ first for a reason. That’s kind of the baseline if you want to be a high-level team. But it’s not a given, you’ve got to make it happen, and it starts in your mind.

“Playing hard is not just about physicality and aggressiveness, it’s about mindset and approach.”