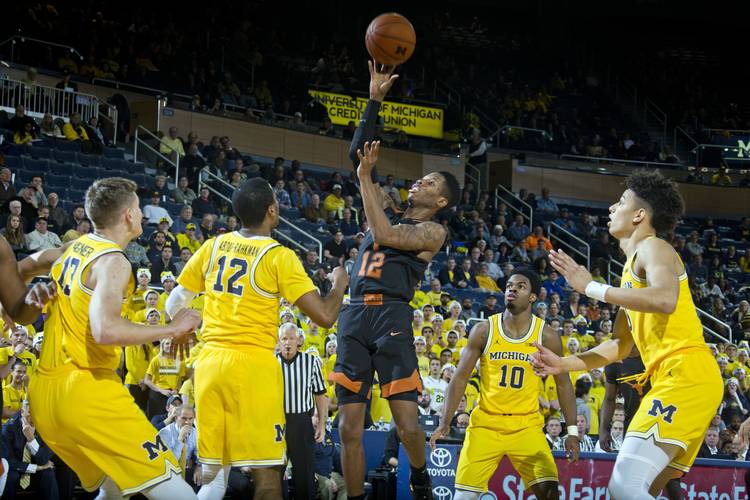 Texas guard Kerwin Roach Jr. (12) goes to the basket in the first half of an NCAA college basketball game against Michigan at Crisler Center in Ann Arbor, Mich., Tuesday, Dec. 6, 2016. (AP Photo/Tony Ding)

Effort wasn’t the issue against Michigan, nor was it the defense. Both were at winning levels in what was easily a winnable game at the Crisler Center.

Don’t blame those all-new black Nike uniforms, either. Pin this 53-50 loss on the offense. Texas missed 10 of its last 12 shots in the final nine minutes and watched the home team celebrate with its fans on a damp, chilly Tuesday night.

The offense struggled with its half-court sets down the stretch and, frankly, the Horns missed some shots you must make to win at this level. Tevin Mack had 18 points, two shy of tying his career high. But Andrew Jones was the next leading scorer with seven points as Texas shot 35 percent after halftime.

“Just gotta figure it out, man,” said Davis, who had 23 family members and friends in the crowd from his hometown of Saginaw, Mich. “In spurts, we’ve shown we can put everything together. We get stops and play good as a team. But it’s still early in the season. It’ll happen for us.”

Smart generally doesn’t like to use the word “frustrated.” But his emotions afterward were readily apparent.

“Those guys are disappointed,” Smart said. “I think they knew that was game we could take. When you have a team like this, you’ve got to learn how to take those games on the road. A team like this is not going to give it to you. Guys are upset that we didn’t take the game.”

As in other games this season, there are plenty of things Smart’s coaching staff will dissect and praise.

James Banks had terrific energy in the night’s best sequence when he subbed in for Jarrett Allen, who was in foul trouble. With Banks holding down the middle, Texas overcame a 10-point deficit. Mack hit a 3-pointer from practically downtown Detroit. Jacob Young hit another 3-pointer, and Andrew Jones threw down a vicious tomahawk dunk on a runout.

“Yeah, we did have some mojo at that point, and you could tell by the point swing,” Banks said. “At no point in time did we think we were out of it. So I knew in their head, they were thinking the same thing.”

That spurt gave Texas a 40-37 lead with 14:03 remaining. But soon after, things went south offensively.

Davis’ floater and Shaq Cleare’s soft dunk gave Texas a one-point lead with 9:48 remaining. From that point on, it was a struggle.

It sure didn’t look like the Horns panicked in their half-court sets. They just couldn’t play inside out. Several shots came late in possessions, and some were plain difficult. Roach’s driving layup in MoPac-level congestion with 1:56 remaining was UT’s only field goal in the last four minutes.

“Their defense is good, but it was more on us, honestly,” Mack said. “We could have made some pays to win the game, but we just didn’t make the right plays down the stretch.”

The Wolverines (7-2) got the upper hand when Zak Irvin missed a reverse layup, but Wagner was there for the critical putback with 16 seconds left. That gave Michigan a 51-50 lead.

Wagner had a team-high 15 points, but it wasn’t like the Wolverines were burning through the nets, either. Michigan shot 33 percent in the second half, mostly because of some strong UT defense. Banks had two of UT’s four blocks, and the Horns had six steals.

Single out Wagner’s putback as the play of the night if you like. But this game was lost in the last nine minutes as Texas couldn’t it going on the other end.

“We’re definitely just learning, growing,” Roach said. “It’s a long season. Might as well get the growing pains out now before conference comes.”

Conference play begins five days after Christmas. There’s still time to get it all figured out. But not much.

“I don’t think it damages our psyche,” Banks said. “It fuels us.”