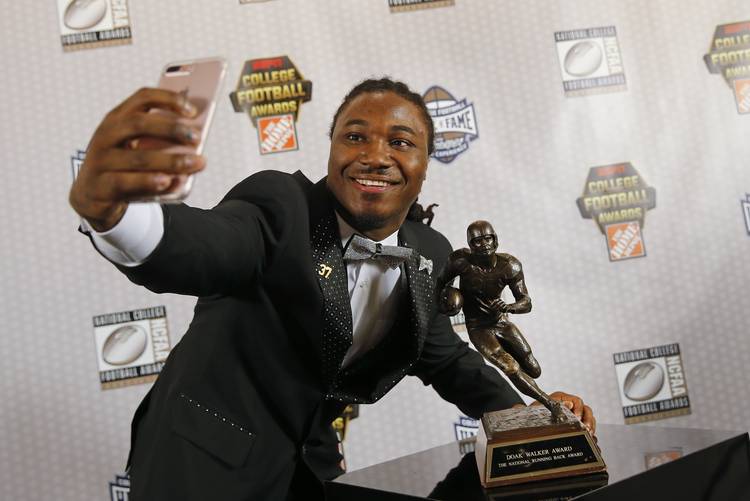 ATLANTA — D’Onta Foreman’s past few weeks have been hectic enough.

“I’ve been trying to soak in all the award stuff and move out of my dorm and get ready to start my future,” the former Texas running back said.

The nation’s leading rusher galloped away with the Doak Walker Award on Thursday at the College Football Awards. Snubbed as a Heisman Trophy finalist, Foreman was practically giddy at taking home the award as the nation’s best running back.

“I told my mom, ‘I don’t know if it’s going to happen today.’ I’m just blessed to be here,” Foreman said in the media room immediately afterward. “When they called my name, emotions ran.”

An assistant who was escorting players from the award show floor to the media room said Foreman was giddy in the elevator ride up.

“I didn’t jump up and down. I looked up and I was actually telling God thank you. He’s blessed me so much,” he said.

The Longhorns hoped to have dual winners. Punter Michael Dickson was a finalist for the Ray Guy Award, but that honor went to Utah’s Mitch Wishnowsky.

Playing only 11 games this season, Foreman was outstanding. The Texas City star became the second player in UT history to rush for more than 2,000 yards in a single season. He joins Ricky Williams (1997, 1998) and Cedric Benson (2004) as the only Longhorns to ever win the award named after the SMU legend.

“I did everything I could to help our team win,” Foreman said. “I gave it my all every game, and unfortunately we just didn’t get the wins that we wanted, but it meant a lot to me to be a leader of the team and try to put up numbers.”

Lake Travis graduate Baker Mayfield of Oklahoma was up for the Davey O’Brien Award as the nation’s best quarterback, but Clemson’s Deshaun Foster won the honor after leading the Tigers back to the College Football Playoff.

However, another Central Texan had plenty to celebrate. Oklahoma receiver Dede Westbrook, a former Cameron Yoe star, won the Biletnikoff Award as the nation’s best receiver. It was the first time a Sooner, coming from a school with a long history of great running backs, had picked up the award for wideouts.

Foreman, a junior with 2,782 career yards, already has announced he’s leaving Texas and entering the NFL draft. He signed with Select Sports Group in Houston and will train with EXOS in Florida. Most mock drafts have Foreman going in the early rounds, possibly even late first.

He credited Longhorns first-year offensive coordinator Sterlin Gilbert and offensive line coach Matt Mattox with helping him learn patience. In September, Foreman split carries with fellow running back Chris Warren III. But Warren, a sophomore from Rockwall, suffered a knee injury against Oklahoma State on Oct. 1 and was lost for the season.

From then on, it was Foreman left, right and up the middle. He rushed for 159, 136 and 124 yards in three consecutive games. Foreman went wild against Baylor, piling up 250 yards and scoring twice.

“I believe we would have rotated, but I also feel like in the games we did share carries, I was still able to put up the numbers I needed to put up,” Foreman said. “Getting more carries took a toll on me later in the season, and that’s probably why it took more carries to get the yards I really wanted.”

If there’s a single game that truly stands out, it came on a gloomy, cool day in Lubbock against Texas Tech.

Against an awful Red Raiders defense, Foreman had 341 yards, a mind-boggling number and one that was nine yards shy of tying Williams’ single-game record set against Iowa State in 1998. He did it on 33 carries, including one that saw Foreman race 74 yards for a touchdown while wearing only one shoe.

Foreman was so dominant that day, fans were apoplectic that Gilbert had backup quarterback Tyrone Swoopes run on third and fourth downs in crunch time. Swoopes got stuffed, but Texas escaped with a 45-37 victory when Kris Boyd made a game-ending interception in the end zone.

“On the sideline, I told them, ‘Give it to me,’ ” Foreman said. “I wasn’t upset with the call. I guess after the game, I was a little more upset with it because I needed nine yards. That was the biggest thing. I could have broken the record with those two carries.”

Foreman ran a school-record 51 times for 250 yards in a critical overtime loss to Kansas and finished with 165 against TCU. He leaves Texas having run for more than 100 yards in 13 consecutive games, a new school record.

Foreman said he’ll always consider himself a Longhorn and had a word of advice for everyone who will suit up for new coach Tom Herman.

“Every day you have to go out there and grind like it’s the last,” Foreman said. “I really feel like we had a great off-season and we were prepared, but we have to prepare better.”

Frustrated? No, the Texas men are ‘disappointed’ with their 4-4 start