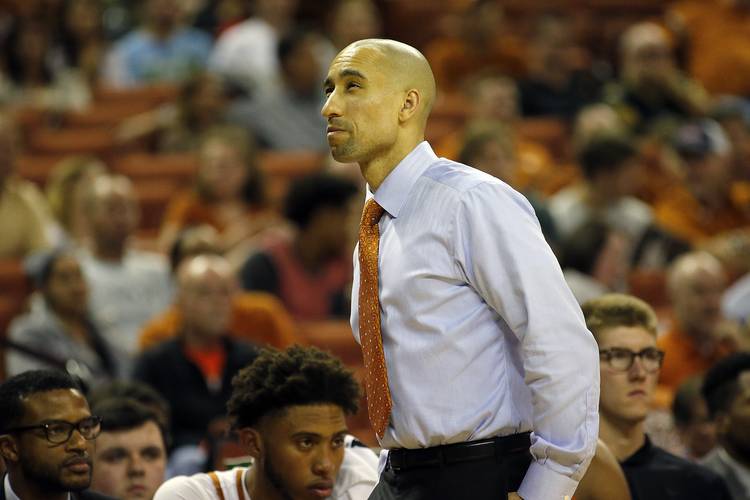 Texas coach Shaka Smart reacts as his team is defeated by the Texas-Arlington Mavericks 72-61at the Frank Erwin Center on November 29, 2016 in Austin, Texas. (Photo by Chris Covatta/Getty Images)

Already this season, there have been times when Shaka Smart wanted to drop an F-bomb. But he never uses that word — frustrated.

“Disappointed with the game,” Smart said after Texas lost to UT-Arlington last week.

Maybe it’s psychological or simply practical. Disappointment implies that you expected to win and didn’t. Frustration stems from not being able to identify what’s wrong and make corrections.

Texas (4-4) wants to ease its disappointment, frustration or whatever you choose to call it on Saturday against Long Beach State at the Erwin Center.

“We never use the word ‘frustrated,’” freshman James Banks said after the Michigan loss. “Everybody wants to win. Every person, from our managers to the leading scorer on our team to our coach, everybody wants to win. So when you come here, you’re more so disappointed, especially when you have the ability to win here. It would have been a great one.”

There is no cavalry coming, so the Longhorns must figure things out themselves.

“Being young is not an excuse,” sophomore Tevin Mack said. “We’ve still got to win games like (Michigan).”

Kerwin Roach Jr., Eric Davis Jr. and Andrew Jones must find some way to get things moving in half-court offensive sets. The Horns had just 11 assists total during two losses in Brooklyn. It’s been a struggle to get double-digit assist totals the last three games.

The Horns, like probably everybody else, were buzzing about Golden State’s Klay Thompson, who scorched the Pacers for 60 points in just 29 minutes last Monday. Twenty of his 21 field goals produced assists, and ESPN calculated that Thompson dribbled the basketball only 11 times.

Every basketball team could learn from ball movement like that.

Against Michigan, Mack said of the offense, “I feel like it was kind of stagnant. We just didn’t get the shots we needed to get in order to win the game. We ended up taking some tough ones at the end of the (shot) clock.”

None was more difficult than Davis’ go-ahead attempt with four seconds left. Dribbling to his left, he said he thought there’d be some daylight for an attempt to drive inside. Instead, Davis got stopped, so he fired up a shot that was partially blocked.

It could have been an electrifying moment for a player that, by all accounts, is one of the team’s better shooters in practice. Yet, Davis is struggling when the lights come on. The sophomore is shooting 27 percent in eight games and averaging just 7.1 points.

“I know I’m a good player,” Davis said. “My process is just different from everybody. It’ll start happening for me.”

Said Smart, “He’s trying. He’s trying to work his way back to being the Eric he can be. I think he needs to think a little bit less and just continue to try to attack.”

The Longhorns must attack the rest of the non-conference schedule this month. Texas has only four games left before Big 12 play begins at Kansas State on Dec. 30. UT is 18-4 at home under Smart.

“Right now, we’re growing,” Banks said. “We realize that we’re a good team. We realized that we can beat other good teams. And we realize we have to play better on certain offensive sets. We’ve got to get better on the defensive end. We have to keep getting better.”