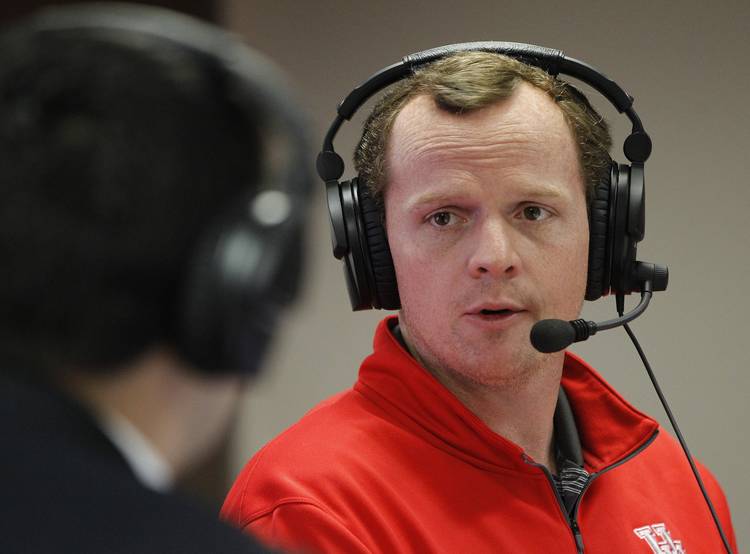 In this Feb. 4, 2015 photo, Houston's offensive coordinator Major Applewhite speaks during a webcast in Houston. Applewhite was hired to replace Tom Herman as coach at Houston on Friday, Dec. 9, 2016. ( Karen Warren/Houston Chronicle via AP)

Friday’s news with Tom Herman’s former employer in Houston had huge ripple effects for his new job with the Longhorns.

Both coaches interviewed for Herman’s old position; however, it was believed that both would come to Texas if Houston hired someone else.

A UT spokesman had no comment on Friday when asked if Orlando was indeed coming to Texas. Orlando is expected to stay with the Cougars through their bowl game on Dec. 17.

Tilman Fertitta, chairman of the UH System Board of Regents, echoed Yurachek’s thoughts in an interview with the Houston Chronicle.

“It’s probably known out there that Todd’s probably going to go join Tom Herman at the University of Texas,” Fertitta said. “I don’t know if he’s officially told us. But I interviewed him, and Todd’s not going to stay.”

Fertitta added that Orlando was “a great guy, gosh I wish him the best of luck. I would have done anything to keep him.”

For Applewhite, staying at Houston is a unique opportunity for the former Texas quarterback, who now occupies one of the best Group of Five jobs in college football.

“We poured a lot of energy into that program together the past two years and Major will do a terrific job continuing to build on that,” Herman said in a statement. “His goal has always been to have an opportunity to run his own program, he’s ready for this next step and I’m just thrilled for Major, Julie and his family.”

Applewhite may also choose to retain Houston safeties coach Craig Naivar, another Herman assistant that was thought to be coming to Austin.

With Applewhite now out of the mix at Texas, who becomes the Longhorns’ offensive coordinator? That is now unclear.

“Some of them are coming from different places,” Herman said Friday after delivering pizza to UT students, “so we’ll know a lot more next week after recruiting stops this weekend and let the dust settle a little bit next week.”

The NCAA-mandated dead period begins on Monday. Coaches are not allowed to contact recruits until Jan. 11. However, recruits can still call coaches.

Herman also sat on the front row at Gregory Gym on Friday as the Texas volleyball team faced BYU in the NCAA tournament.

Down but not out: Texas advances to Elite 8 with fifth-set comeback