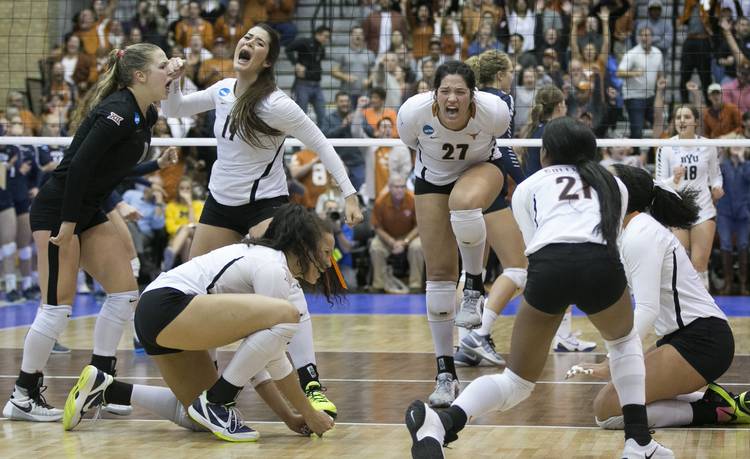 UT volleyball players, left to right, Cat McCoy, Paulina Prieto Cerame, Micaya White, Yaasmeen Bedart-Ghani, Chloe Collins and Ebony Nwanebu celebrate a tying point in the fifth set of their win over BYU at the regional round of the 2016 Division I Women's Volleyball Championship at Gregory Gym on Friday December 9, 2016. JAY JANNER / AMERICAN-STATESMAN

There were 214 points scored Friday, but the most significant were the last four. Texas fought off two match points in the final set, and the Longhorns closed out their evening with four straight points.

“It kind of feels like I just woke up from something,” said junior Ebony Nwanebu, whose team will host Creighton in a regional final Saturday night. “It was really emotional, and I think I’m more emotional about the fact that we fought so hard. It’s nice to be around a group of people that never for a second thought that we were going to lose.”

BYU controlled much of the opening set, and the Cougars were sending an early message when Texas coach Jerritt Elliott burned a timeout with his team trailing 20-17. White used five kills and an ace to force ties at 20, 21 and 23. With White on the service line, Texas outside hitter Paulina Prieto Cerame then put the set away with back-to-back kills.

White and Prieto Cerame were responsible for 14 of Texas’ 18 kills in the opening set. White, though, credited her senior teammate with an assist.

“A lot of people don’t see the leadership she does,” White said. “In the middle of the first set, she looked at me and she said, ‘No one is stopping you.’ That just gave me a confidence boost.”

Texas followed up its rally with a rout. After closing the first set on a 4-0 run, the Longhorns coasted with eight of the second session’s first 11 points.

The next two sets, though, belonged to BYU.

White and sophomore Morgan Johnson led Texas to within a point of a sweep, but BYU fought off two match points in a 26-24 revival. The Cougars then held off Texas in the fourth frame to set up a fantastic finish.

Thanks to two aces from freshman Mary Lake, BYU scored the first five points of the fifth set. The Cougars closed in on an upset with 12-7 and 14-12 advantages.

Led by two players who have won national championships — Nicole Dalton at Texas in 2012 and Prieto Cerame at Penn State in 2013 — UT didn’t flinch. The Longhorns had one last rally in them.

“We kind of just looked at each other, even though we were down by that much, and said we’re not losing this game,” Nwanebu said. “We never had the mindset that we were going to lose the game. (Assistant coach Erik Sullivan) always says don’t look at the scoreboard, and sometimes you have to. The score doesn’t matter until it’s the final point.”

Trailing 14-12, Texas used a kill from Nwanebu to get the serve to freshman Autumn Rounsaville. White and Nwanebu exchanged kills as the Longhorns took their first lead of the set, and Texas then closed out the match on a hitting error by BYU’s Amy Boswell.

“Everybody thought we were down and out, down 12-7,” Elliott said. “I give my team a lot of credit for the belief, making plays and executing at the end.”

Texas hit .323 as a team, and White, Nwanebu (19), Prieto Cerame (16) and Johnson (11) all registered double-digit kills.  Chloe Collins paced the Longhorns with a career-best 70 assists, and Cat McCoy recorded 23 digs.

A balanced BYU attack had five players who tallied between 12 and 16 kills, and freshman McKenna Miller led the Cougars with 16 kills on 50 attempts. BYU, which eliminated Texas in the national semifinals in 2014, had its 13-match winning streak snapped.

“Texas is obviously a fantastic team, and volleyball is a game of runs,” Boswell said. “We just came up a little bit short, and their run was a little longer than ours. I can honestly and without any regret say that we fought the entire time. We didn’t give anything to Texas; they had to take it.”

Karen Aston: Texas-Tennessee is a measuring stick for both basketball teams