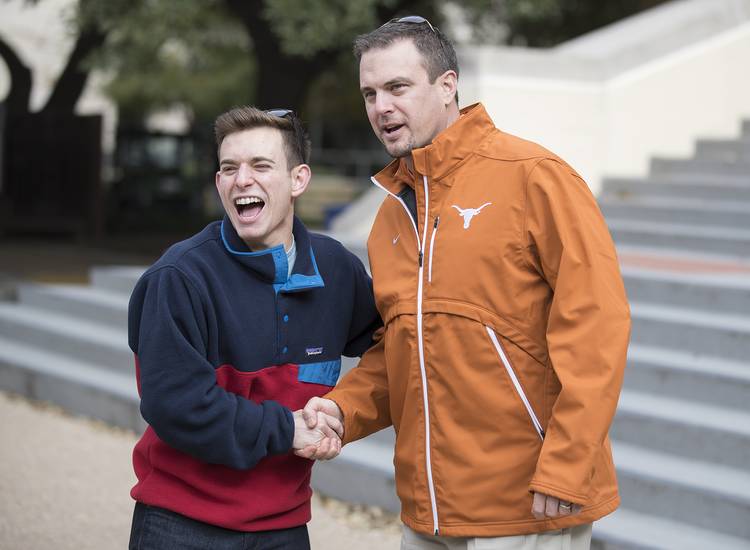 If meeting Tom Herman didn’t get Texas students to stand in line on a cold day, a couple Kawasaki Mule-loads of Gatti’s Pizza did the trick.

Hundreds showed up, and the new Longhorns football coach greeted them all with a handshake, smile and photo opportunity Friday afternoon outside Gregory Gym.

“Enjoy your pizza,” Herman said on repeat for a full hour in 40-degree temperatures. Make no mistake, he got in a few bites, too.

The students, many of whom chanted his predecessor’s name a couple of months ago, appreciated the gesture. To paraphrase sophomore cornerback Kris Boyd, these fans will root hard for Herman just as they did for Charlie Strong.

“I’m excited,” Texas freshman Nick Kucholtz said. “I was a big Strong supporter, but with the way we ended the season I think it was just time for a change. … What (Herman) did at Houston was pretty incredible, so I’m hoping he can repeat that success here.”

Herman said getting face to face with the students was just part of his “old-school” approach to building a relationship between the team and student body. “Can’t wait to meet  you & wish you good luck on finals!” he said in a tweet welcoming students to join him for the meet-and-greet.

“I want them to know that we play for them and we take that job very seriously.”

The interactions were full of not-so-subtle reminders that these students take their Longhorns football seriously, too. One graduate student told Herman that he went to undergrad at Alabama, “so expectations are high.”

Another wanted to know if Herman had decided on an offensive coordinator. “Not yet,” he replied with a chuckle.

One fan even had a suggestion, albeit an outdated one.

“We want Major back,” the fan said, not realizing that Major Applewhite had already been announced as Herman’s successor at Houston on Friday morning. Herman broke the news.

Speaking of the Cougars, UT student Maria Bustamante showed up to meet Herman wearing a Houston sweatshirt. She said it was her only available shield against the cold. Herman didn’t mind.

“Nice sweatshirt,” he said when she came up for a photo.

Multiple students mentioned Strong’s weekly appearances at Plucker’s, but said he never did anything quite like this. Even if they just came for the pizza, students can now put a face with their new head coach.

Frustrated? No, the Texas men are ‘disappointed’ with their 4-4 start