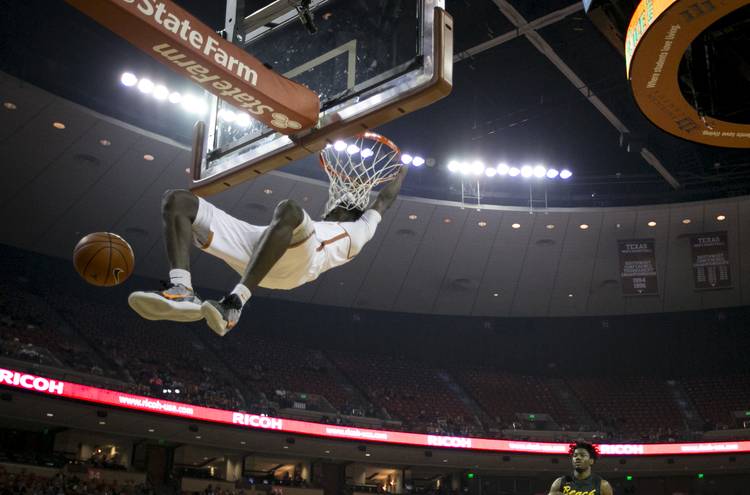 UT's Andrew Jones dunks the ball in the first half against Long Beach State at the Erwin Center on Saturday. JAY JANNER / AMERICAN-STATESMAN

Was it easy? Is it ever? But the Texas men’s basketball team finally found its often-absent offensive mojo in the second half Saturday to overcome a 12-point deficit and roll to a 71-65 victory over Long Beach State.

The Longhorns, improving their record to 5-4 before a crowd of 10,173 in the Erwin Center, erupted for 43 points in the second half. That followed a first half that exemplified their status as the worst statistical offensive team in the Big 12 Conference in every major category.

“When you struggle to score,” Texas Coach Shaka Smart said, “there’s always a reason why.”

Texas came alive over the second 20 minutes when swingman Tevin Mack awoke from a first-half slumber and guard Eric Davis Jr., showed signs of awakening from a season-long offensive nightmare.

Mack scored 16 of his team-high 18 points after the break, hitting 5 of 8 field goals after missing all three of his first-half attempts. Davis, mired in a horrendous shooting slump, drained a season-high three 3-pointers overall and hit two straight buckets during a 24-10 run in the second half to help put the game away despite a late threat by the 49ers (2-10).

“It feels great,” Mack said of Davis’ performance. “It’s what we expect from Eric.”

Yet Davis insisted that his confidence wasn’t shattered and he knew his teammates still had faith in him.

“I give a lot of credit to my team of doing a really good job of staying with me,” said the sophomore from Saginaw, Mich. “I’m not sure at any other school I’d get the same thing. This group of guys is really special.”

Long Beach State was paced by guard Evan Payne’s 26 points, which included eight 3-pointers. The junior opened the second half with consecutive 3-pointers to build the 49ers’ lead to 40-28.

That, said Smart, served as a wake-up call for his team.

“We talked about it during a timeout,” he said. “(I said) ‘Now we’ve got to make a choice. This guy gets no more open shots.’

“I did think we played with more urgency after that.”

Indeed, Payne made just one more trey over almost 18 minutes as the Longhorns gradually gained control.

The Longhorns’ first-half offensive woes were typified in the final seconds before intermission. What could have been a possible momentum builder for the second half turned into a pratfall.

With the 49ers stalling for a final shot and holding a 34-28 lead, Jacob Young stole the ball near the top of the key and drove the court for a layup. But Long Beach State’s 6-foot-7-inch Gabe Levin caught up with Young and swatted the ball away from behind with a half-second left to preserve the 49ers’ six-point lead at the break.

With Mack, Texas’ leading scorer and most reliable shooter, managing only two points, on free throws, the Longhorns’ shot just 33.3 percent in the opening half. Mack never got into a rhythm after picking up his second foul with 8½ minutes left.

Long Beach State’s Payne was the hottest player in the opening half. The junior guard drained five of six 3-pointers and finished the half with 17 points, well above his per-game average of 12.1.

Mack’s first field goal, in six attempts, was a driving layup that pulled the Longhorns to within 44-42 with 13 minutes left. Texas had dug itself a 12-point hole coming out of intermission after Long Beach State opened the second half with back-to-back 3-pointers to surge in front 40-28.

Mack gave Texas its first lead since 5-4 when his first 3-pointer of the game, coming on an open look from the deep left corner, put the Longhorns up 47-46 with 10:39 left.

“We knew he’d come out aggressive,” 49ers Coach Don Monson said of Mack. “The biggest three he made was in that corner where he was wide open coming out of a rotation.”

Karen Aston: Texas-Tennessee is a measuring stick for both basketball teams

Texas heads back to Final Four after a sweep of Creighton