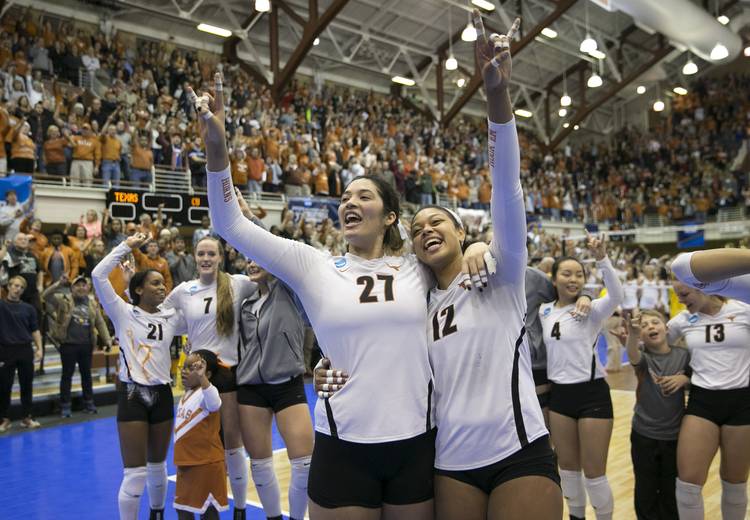 UT's Yaasmeen Bedart-Ghani, left, and Morgan Johnson celebrate their win over Creighton at the regional round of the 2016 Division I Women's Volleyball Championship at Gregory Gym on Saturday December 10, 2016. JAY JANNER / AMERICAN-STATESMAN

In Nicole Dalton’s universe, the volleyball season ends in the Final Four.

Dalton was a true freshman in 2012 when Texas won an NCAA Championship. The Colorado-raised setter was sidelined by an injury during Texas’ 2013 appearance in the national semifinals, but she returned as the Longhorns contended for titles in 2014 and 2015. On Saturday, Dalton once again submitted her RSVP for the Final Four.

Ebony Nwanebu and Micaya White combined for 25 kills, and Texas rolled to a 25-19, 25-20, 25-11 win over Creighton at Gregory Gym. With the sweep in NCAA Tournament’s regional final, Texas (27-4) advanced to the Final Four for the fifth straight season. Awaiting the Longhorns in the national semifinals on Thursday night will be a Nebraska team that beat Texas in last year’s championship match.

Stanford and either Minnesota or UCLA will also be in Columbus, Ohio for the other semifinal.

“It’s amazing, and it never gets old,” Dalton said. “I’m brought to tears right now, because it is so hard to get to the Final Four and I don’t think everyone realizes that all the time. When you have a group of girls each and every year that I’ve been, it has been amazing.”

Creighton (29-7) scored the match’s first point, and a 2-2 tie existed at one point in the opening set. The Longhorns, though, controlled the scoreboard as a 9-0 run gave Texas an 11-2 edge. Creighton never got closer than three points in the set as Nwanebu connected on five of her eight attempts.

The second set was a little more contested — Creighton led by as many as four points — but Texas rallied and cruised into the intermission with a five-point win. Texas scored 15 of the third set’s first 20 points, and eventually all that was left was the celebration. Texas secured its spot in Columbus on an attacking error by Creighton.

Texas showed no signs of a hangover after its comeback win over BYU on Friday, a triumph which featured the Longhorns surviving two match points in the fifth set. Texas head coach Jerritt Elliott told his players after the emotional victory that he wanted them to “desensitize and be ready to compete.” The Longhorns responded with their third sweep of the postseason.

“I honestly felt like I could set anyone out there,” Collins said. “Just to know that all my hitters were on fire tonight, and as a setter, that’s awesome.”

The winners of five-set matches in each of the NCAA Tournament’s first three rounds, Creighton ran out of gas in its first appearance in the Elite 8. Jaali Winters led Creighton with 11 kills, but no other Bluejay had more than seven kills.

Creighton hit .154, and the Bluejays had 13 more attacking errors than Texas.

“We knew that they were a fantastic team and would need to be our best effort,” Creighton coach Kirsten Bernthal Booth said. “I thought they made us really uncomfortable, and led to some uncharacteristic things with our team.”

Texas and Creighton played in front of an announced crowd of 4,336 on Saturday, which is well above Gregory Gym’s listed capacity of 4,000. A day earlier, the Longhorns drew 3,478 fans for a match that began at 3 p.m.

After Saturday’s match, Elliott credited his marketing department with spreading the word about the team’s home matches in the NCAA Tournament. He also gave a shout-out to new Texas football coach Tom Herman, who was in the crowd for the win over BYU.

“We had a really great crowd tonight, as we did yesterday even though we had an earlier time,” said Paulina Prieto Cerame, who joins Dalton and Collins in Texas’ senior class. “Looking out there and just seeing all our loved ones as well as our fans, it’s amazing. Something we’re definitely going to miss for the rest of our lives, but just proud that we were a part of that.”